Another wounded child exposes the horrors of Syria's unending war

Children have long suffered from Syria's brutal war, which began more than five years ago. One activist group, I am Syria, estimates 50,000 children have been killed since March 2011. The latest face of the carnage belongs to five-year-old Omran Daqneesh.

Look beyond the dust and blood that cover the face of Omran Daqneesh, into his eyes, and it's clear this is a boy who has witnessed horrors beyond what any five-year-old should see.

A photo of Omran sitting silent and dazed in the back of an ambulance in war-torn Aleppo has been widely shared on social media, provoking tears and outrage as Syria's seemingly unending civil war drags on.

The boy was injured Wednesday night in an airstrike in the rebel-held side of Aleppo. Some residents blame Syrian government forces for the attack.

Video shot by an opposition media organization in Aleppo shows rescue workers carrying Omran out of the rubble before he wipes blood off his face, rubbing it onto the ambulance seat. This link goes directly to a video that contains graphic images that some readers may find disturbing.

Medical officials say the child was taken to an Aleppo hospital for treatment and was later released. It's unclear what happened to Omran's family.

Other children were also pulled from the remains of the building and treated.

Children have long suffered from Syria's brutal war, which began more than five years ago. 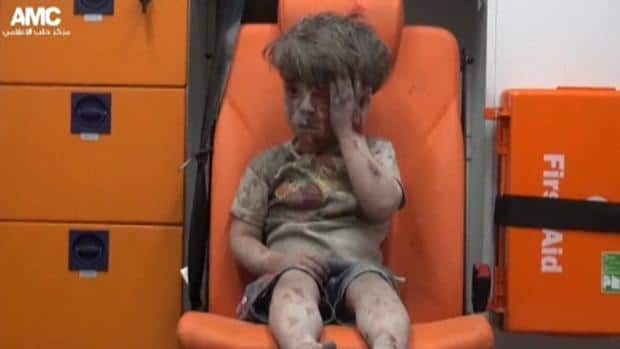 Children pulled from rubble of bombed building in Syria

One activist group, I am Syria, estimates 50,000 children have been killed since March 2011. UNICEF found that 8.4 million young Syrians have been affected in some way by the conflict, whether through direct violence or being forced to flee to safety abroad.

Other photos of Syrian children caught up in the war have also sparked outrage and, in at least one case, sparked change as well.

The world remembers the heartbreaking photo of the little boy in blue shorts and red shirt, lying face down in the wet sand, appearing to be asleep.

Alan Kurdi died along with his mother and brother almost a year ago, as the family tried desperately to escape the conflict in Syria. Alan's body washed ashore in Turkey, after he drowned during the dangerous boat journey to Greece.

At the time, Syria's war had raged for more than four years. The image shocked many and galvanized others to take action after, it seems, much of the world had forgotten the daily artillery strikes and barrel bombs that have become routine for millions of Syrians.

The story of the Kurdi family ignited a debate over Syrian refugees during last fall's Canadian election campaign. More attention was focused on the promise made by the Liberal party to resettle 25,000 Syrians in Canada — a promise that was fulfilled earlier this year.

What effect will the picture of Omran have on the global view of Syria's long war? Once again it appears many have forgotten the plight of those in Aleppo, where it's estimated 100,000 children live in neighbourhoods that have come under regular bombardment.

Unlike the millions of Syrians who have fled, either to the countries surrounding Syria such as Lebanon or Turkey, or to Europe, most of those who remain in Aleppo simply cannot afford to escape.

Many who have been able to take refuge abroad say they worry about a lost generation of Syrian children.

In the Za'atari refugee camp in northern Jordan, I met Um Abdullah earlier this year. The mother of three wondered, "What will my sons and daughters do when they go home? They have not been in school for years. What future do they have?"