Ellen DeGeneres gets emotional on receiving Presidential Medal of Freedom

Actor, comedian and talk show host Ellen DeGeneres is particularly emotional as she receives the Presidential Medal of Freedom. 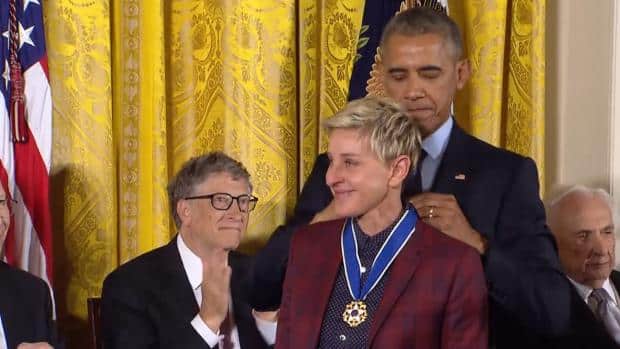 Actor, comedian and talk show host Ellen DeGeneres was particularly emotional when she received the U.S. Presidential Medal of Freedom on Tuesday.

Tears streamed down her face as she stood beside President Barack Obama while she was honoured for breaking down barriers when she announced she was gay in the 1990s.

In his opening speech, Obama said DeGeneres has a way of making people laugh at something rather than someone, "except when I danced on her show."

He said it's also easy to forget that she had risked her career nearly 20 years ago when she came out as gay.

"What an incredible burden that was to bear, to risk her career like that," Obama said. "People don't do that very often, and then to have the hopes of millions on your shoulders."

DeGeneres's visit to the White House faced a brief delay because she forgot to bring her ID.

DeGeneres, sitting on a park bench before the ceremony, tweeted, "They haven't let me in to the White House yet because I forgot my ID." She added, "#NotJoking."

The Presidential Medal of Freedom recognizes especially meritorious contributions to the national interests of the United States, its security and its culture. Obama called the 2016 group a "particularly impressive class."

It is the highest civilian honour in the U.S.