U.S. President Donald Trump kicked off Black History Month by gathering some of his black aides and supporters at the White House for a "listening" session. His comments, about his relationship with the media as well as abolitionist Frederick Douglass, drew immediate backlash.

U.S. president made confusing comments about abolitionist Frederick Douglass, who died in 1895 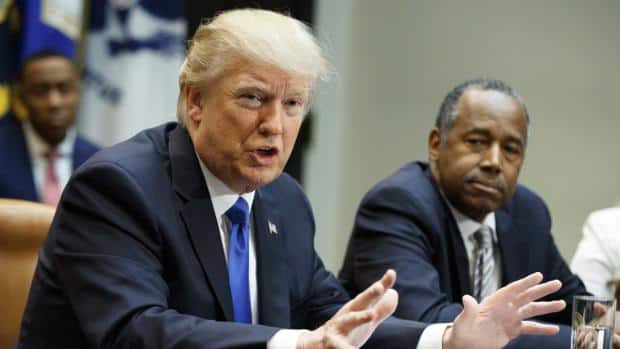 Trump: 'Somebody said I took the statue out of my office'

U.S. President Donald Trump kicked off Black History Month on Wednesday by gathering some of his black aides and supporters at the White House for a "listening" session in which he praised the contributions of slave-turned-abolitionist Frederick Douglass and other African-American icons.

"Frederick Douglass is an example of somebody who has done an amazing job and is being recognized more and more, I notice," Trump told the group gathered in the Roosevelt Room.

Critics, however, perceived Trump's comments as a reference to a still-living Douglass. The influential and celebrated African-American social reformer died in 1895.

Douglass was born a slave, and became an orator and a leading figure in the anti-slavery movement. Over the last 20 years of his life, Douglass served as marshal and recorder of deeds for the District of Columbia, as well as U.S. minister to Haiti. Black History Month originally started out as a weeklong celebration that included Douglass' birthday along with that of President Abraham Lincoln.

Speaking to the Guardian, Rev. Al Sharpton called the listening session an "insult."

"Our last three presidents, at a minimum, would have a celebration where they would have black culture, artists and invited people that represent established civil rights groups. To reduce that to a 'listening session' at the Roosevelt Room with people who basically all agree with you, to me is tantamount to an insult," said Sharpton.

Former presidents have used the occasion of Black History Month to recall historical milestones and reflect on contemporary challenges. Barack Obama, the first black U.S. president, in 2015 hosted a reception that included civil rights crusader Mattie Atkins as well as the parents of Trayvon Martin, an unarmed African-American teen who was shot in Florida.

"We don't set aside this month each year to isolate or segregate or put under a glass case black history," Obama said. "We set it aside to illuminate those threads, those living threads that African Americans have woven into the tight tapestry of this nation to make it stronger and more beautiful and more just and more free."

Similarly, George W. Bush paid tribute to four activists, including civil rights activist and Democratic Representative John Lewis, at a ceremony in 2008. He urged Americans to remember the struggle of the civil rights movement and the slave trade.

"Our nation has come a long way toward building a more perfect union," he said.  "Yet as past injustices have become distant memories, there's a risk that our society may lose sight of the real suffering that took place." 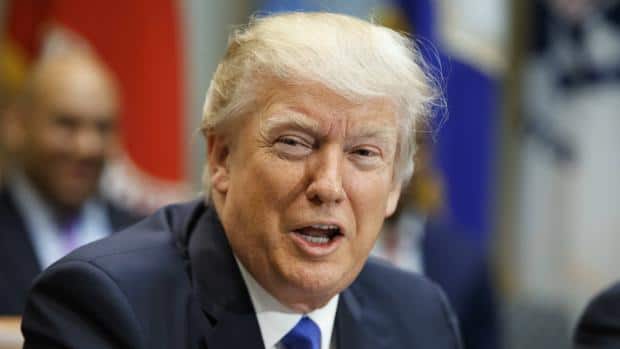 Trump: 'We ended up getting substantially more than other candidates'

4 years agoVideo
0:17
Trump: 'We ended up getting substantially more than other candidates' 0:17

The online satire site McSweeney's ran Trump's comments, word for word, as a humour column, with the headline, "My Very Good Black History Month Tribute to Some of the Most Tremendous Black People."

Similarly, late night talk show hosts poked fun at the new president. Late Show host Stephen Colbert poked fun at the listening session and asked, "What better way to celebrate Black History Month than to have African-Americans listen to a rich white guy complain that the world is unfair to him?"

Some media organizations also suggested Trump's focus on his relationship with CNN was out of place at a Black History Month event. The Washington Post, for example, published an article with the headline, "Trump rants about 'fake news' as he marks Black History Month" while Salon's story was topped with, "Trump's 'amazing' ignorance: The president's Black History Month celebration was embarrassing."

White House spokesman Sean Spicer later said it would become clearer what Trump meant by having noticed Douglass being recognized "more and more."

"I think he wants to highlight the contributions he has made," Spicer said.

The White House has said Trump plans to issue an official proclamation recognizing Black History Month, which has been recognized by every U.S. president since 1976. Other White House events are planned, including a gala and receptions, officials said.

"During this month, we honour the tremendous history of the African-Americans throughout our country, throughout the world if you really think about it, right?" Trump said. "And this story's one of unimaginable sacrifice, hard work and faith in America."

"Martin Luther King Jr., Harriet Tubman, Rosa Parks and "millions more black Americans who made America what it is today," Trump said. "I'm proud to honour this heritage and will be honouring it more and more."

Trump mentioned the new Smithsonian National Museum of African American History and Culture as a place "where people can learn about Rev. King, so many other things." He did not mention the Martin Luther King Jr. National Memorial, which also sits on the National Mall.

Trump also said he did better in the African-American community in his election than candidates in previous years. Among African-Americans, Trump got eight per cent of the vote, slightly better than Republican Mitt Romney's six per cent against then-President Barack Obama in 2012, according to national exit polls.

Trump's black support was not as high as the 12 per cent that Republican Bob Dole won in 1996. Ronald Reagan set the high mark for Republicans in recent history, winning 14 per cent of the black vote when he was elected president in 1980.

Transcript of Trump's opening comments at his listening session 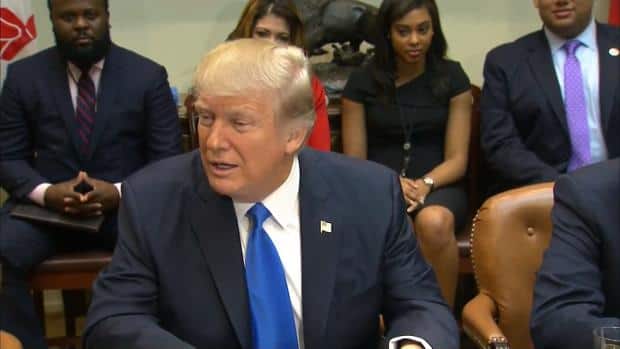 Well this is Black History Month, so this is our little breakfast, our little get-together. Hi Lynn, how are you? Nice to see you. Just a few notes. During this month, we honour the tremendous history of African-Americans throughout our country. Throughout the world, if you really think about it, right? And their story is one of unimaginable sacrifice, hard work, and faith in America. I've gotten a real glimpse — during the campaign, I'd go around with Ben to a lot of different places that I wasn't so familiar with. They're incredible people. And I want to thank Ben Carson, who's gonna be heading up HUD. That's a big job. That's a job that's not only housing, but it's mind and spirit. Right, Ben? And you understand, nobody's gonna be better than Ben.

I am very proud now that we have a museum on the National Mall where people can learn about Reverend King, so many other things. Frederick Douglass is an example of somebody who's done an amazing job and is being recognized more and more, I noticed. Harriet Tubman, Rosa Parks, and millions more black Americans who made America what it is today. Big impact.

I'm proud to honour this heritage and will be honouring it more and more. The folks at the table in almost all cases have been great friends and supporters. Darrell — I met Darrell when he was defending me on television. And the people that were on the other side of the argument didn't have a chance, right? And Paris has done an amazing job in a very hostile CNN community. He's all by himself. You'll have seven people, and Paris. And I'll take Paris over the seven. But I don't watch CNN, so I don't get to see you as much as I used to. I don't like watching fake news. But Fox has treated me very nice. Wherever Fox is, thank you.

We're gonna need better schools and we need them soon. We need more jobs, we need better wages, a lot better wages. We're gonna work very hard on the inner city. Ben is gonna be doing that, big league. That's one of the big things that you're gonna be looking at. We need safer communities and we're going to do that with law enforcement. We're gonna make it safe. We're gonna make it much better than it is right now. Right now it's terrible, and I saw you talking about it the other night, Paris, on something else that was really — you did a fantastic job the other night on a very unrelated show.

I'm ready to do my part, and I will say this: We're gonna work together. This is a great group, this is a group that's been so special to me. You really helped me a lot. If you remember I wasn't going to do well with the African-American community, and after they heard me speaking and talking about the inner city and lots of other things, we ended up getting — and I won't go into details — but we ended up getting substantially more than other candidates who had run in the past years. And now we're gonna take that to new levels. I want to thank my television star over here — Omarosa's actually a very nice person, nobody knows that. I don't want to destroy her reputation but she's a very good person, and she's been helpful right from the beginning of the campaign, and I appreciate it. I really do. Very special.

So I want to thank everybody for being here.