Donald Trump made an awkward slip of the tongue at a rally in Buffalo Monday evening, referring to the Sept. 11, 2001, attacks on New York as "7-Eleven." 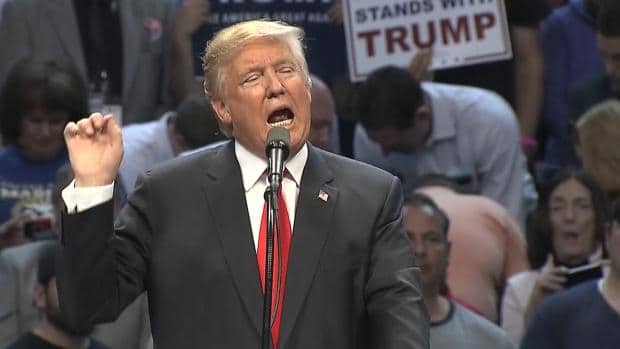 Donald Trump made an awkward slip of the tongue at a rally in Buffalo, N.Y., on Monday evening, referring to the Sept. 11, 2001, attacks as "7-Eleven."

"I was down there, and I watched our police and our firemen down on 7-Eleven, down at the World Trade Center [in New York City], right after it came down, and I saw the greatest people I have ever seen in action," said the businessman, a candidate for the Republican nomination for president.

The 2001 attacks on Manhattan and the Pentagon are commonly referred to as 9/11. The convenience store chain 7-Eleven is known for its Slurpee frozen drinks.

Trump was apparently oblivious to the fact he'd conflated the two.

He was speaking to thousands of supporters at a rally held ahead of the New York primaries on Tuesday.

The video was shared widely on social media, including as a Vine with nearly four million loops.

Oh my gosh. Watching Trump's Buffalo rally. He just praised the NYC firefighters and police who lost their lives on "7/11". 🤔

Can't stop LOLing: "Down at 7-Eleven." Dude we all get hungry for chili dogs, but STAY FOCUSED

Now, it's easy to make fun of a guy who simply misspoke. And fun, too

Perhaps there's an opportunity for some co-branding here?