Canadian politics got a lot more interesting for the average internet user on Wednesday as a House of Commons vote devolved into bumbling, angry chaos.

Did the Prime Minister of Canada just elbow a woman in the chest during a televised House of Commons session?

According to the woman in question, NDP MP Ruth Ellen Brosseau, yes – and the experience left her so overwhelmed that she "had to leave" the chamber and miss Wednesday's vote on the government's assisted-dying bill.

Justin Trudeau was quick to "apologize unreservedly" for the behaviour that lead to his inadvertent collision with Brosseau, but critics maintain that the PM was out of line when he crossed the floor to physically move (or "manhandle," as NDP House Leader Peter Julian put it) Opposition Whip Gord Brown.

"What kind of man elbows a woman?" NDP Leader Tom Mulcair apparently shouted as cameras rolled on The House of Commons. "It's pathetic! You're pathetic!" 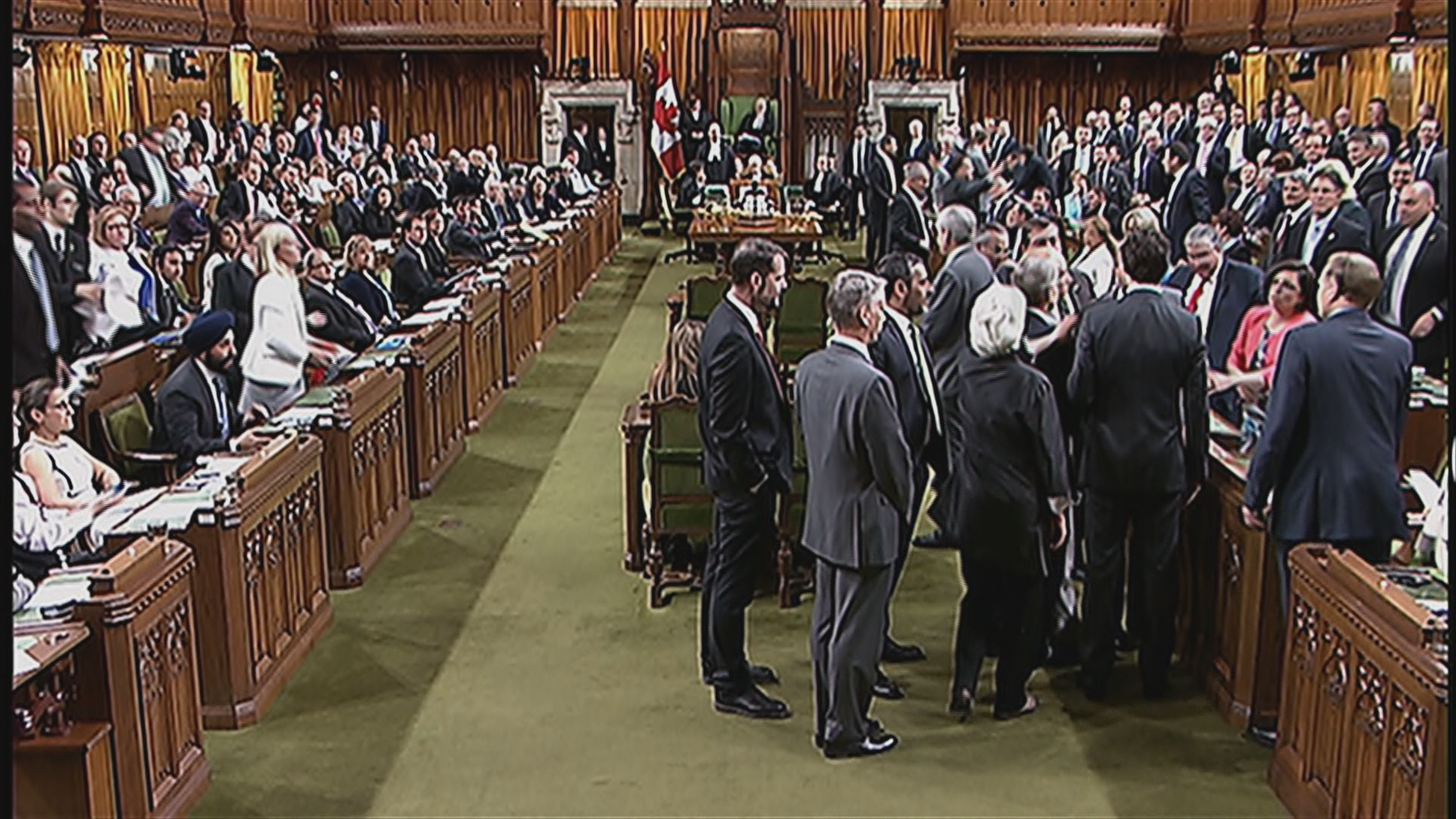 It was unlike anything even the most keen-eyed political buff had seen on CPAC for a very long time – if ever – and those watching the scene transpire live on TV were quick to alert the digital masses that something wild was up in Ottawa.

If only they could figure out what, exactly, was going on.

Good Lord ... if I read this correctly, Justin Trudeau just punched Jose Bautista in the House of Commons.

Is the Maury Povich Show now taping from the Canadian House of Commons?

I'm in my riding tonight and I am just tuning into twitter. Ummm... What the hell is going on in the House of Commons?

Current status of the House of Commons: shenanigans.

Trying to figure out what happened in the House of Commons today like <a href="https://t.co/yPnBTPEusH">pic.twitter.com/yPnBTPEusH</a>

By 8 p.m. on Wednesday, just a few hours after the events in question had transpired, 'House of Commons' was the number one Twitter trend in Canada.

#elbowgate, as the kerfuffle has come to be known, rose to the No. 1 spot nation-wide shortly thereafter and remains the top trending topic on Twitter in Canada as of 11 p.m. Wednesday night.

While much of what's been tweeted with the hashtag has been of a humorous, shocked, or critical nature, Parliament Hill politicians have also been using it to weigh in on the perceived brouhaha.

Some, to clarify facts and spread information, others to share their opinions of how those involved in the melee behaved today.

Things are very very bad in the House. Nearly a physical altercation between Mulcair and Trudeau. <a href="https://twitter.com/hashtag/cdnpoli?src=hash">#cdnpoli</a>

For any MP to physically accost another in the House is appalling. Beyond appalling the assault was by the Prime Minister <a href="https://twitter.com/hashtag/cdnpoli?src=hash">#cdnpoli</a>

Lost in the mix: PM Trudeau's outburst was to speed-up closure vote on the euthanasia bill,unprecedented for an end of life conscience issue

MPs may have gathered today for an important vote on Bill C-14, the government's contentious physician-assisted dying legislation, but what they produced instead was a firestorm of criticism hurled from and in many different directions.

Gender seemed to play a big role in many of the conversations surrounding today's events online.

MP Nikki Ashton was one of the first to bring up this angle while still in The House after Trudeau was accused of elbowing Brosseau.

"I want to say that for all of us who witnessed this, this was deeply traumatic," she said to her House of Commons colleagues. "What I will say, if we apply a gendered lens, it is very important that young women in this space feel safe to come here and work here."

"He made us feel unsafe and we're deeply troubled by the conduct of the prime minister of this country."

Conservative MP Michelle Rempel, who last month published an op-ed condemning the "routine sexism" she faces in her work as a parliamentarian, has been particularly engaged with this angle of the story on Twitter.

Her feed today is filled with retweets (her own tongue-in-cheek commentary added) from the Twitter accounts of people criticizing how Brosseau reacted to being involved in a workplace dust-up.

The story of what happened in Canada's House of Commons Wednesday is now spreading around the world, inspiring headlines and tweets that in some cases challenge Trudeau's feminist values.

One thing for sure: the "I'm a feminist" thing is over. <a href="https://twitter.com/hashtag/cdnpoli?src=hash">#cdnpoli</a>

The Prime Minister himself had this to say at an event later in the evening celebrating the government's official apology for the Komagata Maru incident:

"I'm certainly someone who knows that sometimes it's a challenge to always be positive and be welcoming. And indeed I'm going to apologize again for an incident in the House this evening that might take away a little bit in the news tomorrow and, for some people, the extraordinary celebration that today is... for that I truly regret."