Los Angeles is hoping that a 36-cent plastic ball — well, 96 million of them, to be precise — could help the city protect and conserve its water amid California's historic drought. 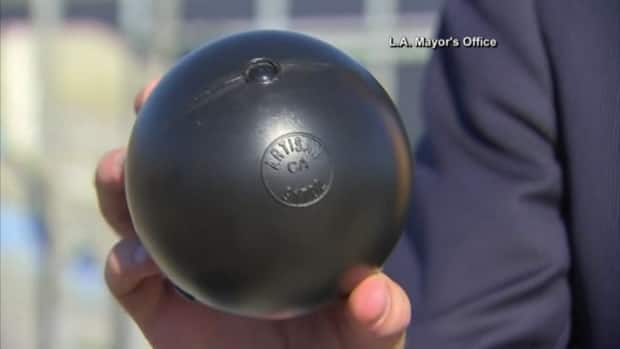 Los Angeles is hoping that a 36-cent plastic ball — well, 96 million of them, to be precise — could help the city protect and conserve its drinking water amid California's historic drought.

The small, black plastic balls are designed to protect water quality by blocking sunlight, preventing unwanted chemical reaction and curtailing algae blooms, according to the Los Angeles Department of Water and Power, the utility company that owns and manages the reservoir.

"As the drought continues, it has never been more important to focus on innovative ways to maintain the highest quality drinking water for our four million residents," he said.

​The shade balls require no assembly or labour, except for occasionally rotating them, the utility company said. The $34.5-million US initiative could help the company save $250 million compared to other alternatives for water quality protection.

California, the most populous state in the U.S., is currently battling a multi-year drought. The dry spell has resulted in unprecedented water restrictions, water waste crackdowns, and even "drought shaming."