If you're stuck in traffic, it might feel like you live in the world's worst city for congestion but you probably don't. CBC News offers a quick look at some of the worst commutes around the globe. 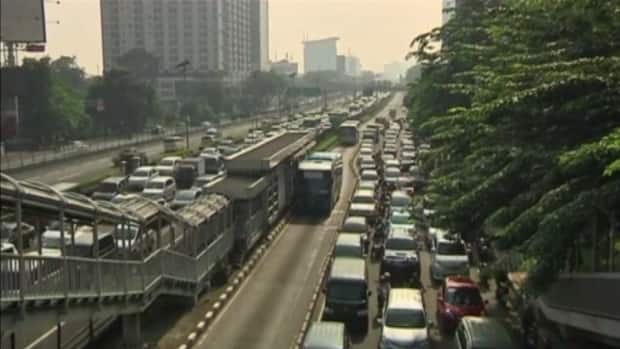 Although sitting in traffic can make it feel like you're stuck in a time warp, with the minutes ticking by, sometimes turning into hours — Canadians have it a lot better than drivers in many other countries.

A number of studies have attempted to compare traffic congestion around the world and while the placement of cities may differ slightly, the same cities appear at the top of most lists.

Jakarta, the capital of Indonesia, was recently named as the worst city in the world for traffic congestion, according to a study released by automotive company Castrol.

It topped a list of 78 other countries in terms of starts and stops with the average driver having to stop 33,240 times a year. Vancouver, meanwhile, recorded an average of 12,600 stop-starts per year and Toronto 8,520.

About 1.2 million people commute on roads daily in Jakarta, and the average speed is about 19 km/h, according to Reuters.

CBC News has compiled a list of some other places in the world renowned for traffic woes. It won't help ease congestion in your city, but it might ease the pain a little — maybe.

Istanbul, the largest city in Turkey, was named the worst in the world for traffic congestion earlier this year in a study released by TomTom, a Dutch company that produces navigation and mapping products.

By looking at travel times throughout the day and comparing them to peak travel in 218 cities, TomTom found there is a 58 per cent increase in average travel times during Istanbul's rush hour.

That adds up to about 110 hours of delay each year for a daily 30-minute commute.

Vancouver was the highest ranked Canadian city with a 35 per cent increase in travel times during rush hour.

Mexico City ranked second place, according to the TomTom data, with a congestion rate of 55 per cent and tied Istanbul at 110 hours of delay annually for a 30-minute commute. It also recorded an average of 30,480 stop-starts according to Castrol.

Mexico City also made the top of IBM's 2011 commuter pain survey based on polling information from more than 8,000 drivers in 20 cities. Montreal was ranked least painful, while Toronto was fifth from the bottom.

The survey used a formula that took into account commuting times, traffic delays, gas prices and whether driving caused anger among others.

Rio de Janeiro ranked third according to TomTom with a congestion rate of 51 per cent. That translate into 99 hours of delays annually for a 30-minute daily commute.

City officials declared three public holidays in an effort to curb traffic during the 2014 World Cup.

With five million cars on its roads, Beijing ranked 15th according to the TomTom data. Travelling during peak times meant a trip that was 37 per cent longer than non-peak times.

The Beijing Department of Transportation said that the average congestion time was nearly two hours in 2013, according to an article from China Daily.

And if you think being stuck in traffic for a few hours is bad, a truly massive jam was reported on a highway into Beijing from Huai'an in the southeast in 2010. The backup was more than 100 kilometres long and lasted more than a week.

Russia's capital was ranked fourth according to TomTom's congestion report, with a 50 per cent increase in travel times during rush hour. The average driver also experienced almost 20,000 starts-stops each year, according to Castrol.

According to an article in the Atlantic, twenty per cent of Moscow commuters spend three hours a day stuck in gridlock and traffic jams can regularly last four or five hours.

And some business travellers are opting for luxury minibuses with reclining leather chairs, LCD TVs and work space so they can keep busy as they crawl through the city to and from their offices, the article said.