What's in your weed: Why cannabis strains don't all live up to their billing

Strains of cannabis may have fancy names and come with promises of tantalizing effects, but many buds have a mixed-up genetic lineage and don't always match what's advertised, plant experts caution.

Red Diesel, Moby Dick, Lemon Burst, or how about Girl Scout Cookies? All names for "bud," the cannabis flower, and when the black market product goes legal in Canada this summer expect some heavy marketing of fancy names and their tantalizing effects.

But plant scientists say the "sell" is hazy. Those buds have a mixed-up lineage and don't always match what's advertised.

It's about genetics, and cannabis is a mixed breed, to say the least.

With more than 100 creative names for pot, each variant is said to have slightly different properties and that translates into different effects, according to vendors.

"Moby Dick is a really popular sativa, fantastic for stress, and it's got like a really kind of citrusy sweet nose," says Clint Younge, who sells pot from his dispensary in Hamilton to clients with medical marijuana prescriptions.

As for Lemon Burst, it's "kind of euphoric and energizing, a daytime strain," while "Red Diesel, straight sativa, makes you feel relaxed. There's no anxiety with Red Diesel."

But pot strains don't all live up to their billing, according to Sean Myles, a plant scientist and assistant professor at Dalhousie University in Nova Scotia.

"Every time you get Bubba Kush it should taste and smell like Bubba Kush. It should behave like Bubba Kush. What we found is that it's not actually the case … while it is the case in apples, you can't say the same for marijuana," says Myles, one of Canada's foremost authorities on apple genetics.

Different types of pot are more like hybrid mutts, he says, when compared to other carefully cultivated products with clear genetic history such as the MacIntosh Apple.

Unlike well-tended apple orchards, pot has grown wild all over the world for centuries. And since it has been raised and traded illegally in so many places, there's been no regulation or consistency of strains.

Most cannabis is generally defined as being one of two species, either sativa or indica. Sativa is thought to have a more invigorating, uplifting effect, whereas indica may be more relaxing or sedating.

But research led by Myles and Jonathan Page, a botanist at UBC, revealed that pot genetics are so interbred that saying a type of weed has one ancestry or the other can often be false.

"It's often the case that these names they've associated with these marijuana strains do not represent any meaningful genetic identity," Myles says.

Take Jamaican Lamb's Bread – which was reported to be 100 per cent sativa by a cannabis producer. In the test by Myles and his team, it  turned out to be nearly 100 per cent indica, the opposite species.

In 35 per cent of the 81 strains tested, the genetics did not match those advertised.

Additionally, Myles says a hybrid strain sold under the same name by multiple growers is often not the same genetically.

"Those names are largely meaningless," he says. "We need to move towards a system where these things are quantified by the medicinal-components side of the strain and the effects they have on the user."

THC levels, which indicate the potency of pot, have spiked since the 1980s, from an average of 3 per cent to an average of 15 per cent today, according to Health Canada. The same strain of cannabis today can vary widely in terms of its THC levels, depending on the growing environment and the genetics.

But the naming conventions under which pot will be sold are unregulated.

"If you want to be taken seriously on this and want to get into a real agricultural game where we're breeding varieties of marijuana like we breed strawberries, tomatoes and potatoes, we're not going to be able to just throw names around like this forever," Myles says.

The potential problems that crop up if pot isn't clearly classified aren't lost on the commercial growers. With legalization on the near horizon, big weed companies are already turning attention to careful breeding of cannabis.

In Leamington, Ont., Aphria is expanding its greenhouse capacity tenfold to one million square feet.

"It's a huge investment, but we are preparing ourselves for what we hope is going to be the recreational market come July," says Cole Cacciavillani, Aphria's co-founder.

His father, an Italian immigrant, started a wholesale flower business decades ago growing holiday flowers like Easter Lilies and Poinsettias for large grocery chains. Whether Poinsettias or cannabis, says the son, who helped switch the business to weed four years ago, it's still about growing potted plants for profit.

Aphria has been producing cannabis for the medicinal market and secured a deal in December to supply Shoppers Drug Mart subject to Health Canada approval.

"The money is starting to flow into the science behind what's in this plant," Cacciavillani says.

Canopy Growth, a large cannabis company in Smiths Falls, Ont., is actively breeding pot and drilling into its genetics to create new strains. There's potentially big money at stake when it comes to standardizing those strains and protecting their genetic purity.

"We'll go to a lot of effort to document the stability of the genetics, the traits, so ultimately we can have plant breeders rights and protect the varieties going into the future," says Mark Zekulin, Canopy's president.

He holds a sample of bud in his hand as he describes a hybrid marriage of the future.

"What you're looking at is a cross between Candyland and Apple Pie, two different varieties. The Candyland selected for its beautiful colour and texture, matched with Apple Pie for the strength of the bud and the plant.

"It may turn out to be the next great genetic [strain]." 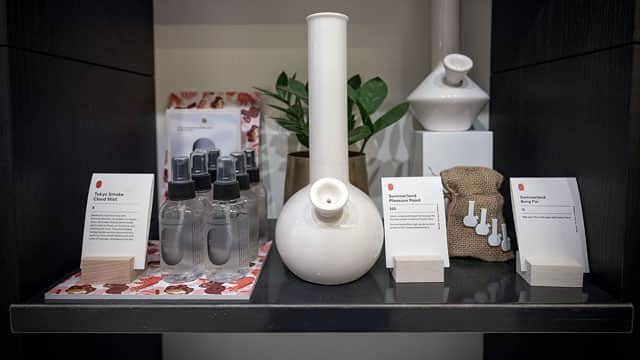 Legalizing recreational marjiuana in Canada and what's at stake

3 years ago
13:47
The legalization of recreational marijuana in Canada is looming and there's a lot at stake financially for those who have invested in industrial scale cannabis operations. Legalizing marijuana would also represent a cultural shift for many people — including what to call it 13:47
CBC's Journalistic Standards and Practices|About CBC News