Spying without spies: Why it's so tricky to figure out what North Korea is up to

North Korea is one of the hardest countries in the world to gather intelligence on, but analysts piece together tiny clues to build a picture of the state of the nation's weapons programs.

North Korea has come a long way in a short time — from a country that couldn't feed its own people, to having high-tech weapons capable of putting the world on edge.

In response to its latest missile test on Tuesday, U.S. Defence Secretary James Mattis said North Korea is continuing to build weapons that can "threaten everywhere in the world." He added that North Korea is endangering world peace, regional peace and "certainly the United States."

A statement from U.S. Secretary of State Rex Tillerson said the international community must send a unified message to North Korea about ending its program to develop weapons of mass destruction.

But given the isolation and secrecy of Kim Jong-un's regime, how do we know the real state of North Korea's weapons program?

If you're thinking "Well, that's why we have spies...," the real answer to that question from people in the intelligence community may shake your confidence in the world's understanding of what's happening in the "hermit kingdom."

"The United States, along with its regional allies, have thrown just about every intelligence trick in the book at the North Koreans over the years," Washington-based analyst Philip Lohaus told CBC News in an e-mail interview.

"But because it's so sealed off, it remains one of the most challenging targets in the world," says the former Pentagon analyst, who is now with the Marilyn Ware Center for Security Studies at the American Enterprise Institute.

The U.S. Director of National Intelligence, Daniel Coats, echoed that assessment in his statement to a Senate Armed Services committee in May: "It is — if not one of the hardest — the hardest nation we have to collect against."

Coats said the U.S. doesn't have constant or consistent spying of the traditional kind in North Korea, in terms of people on the ground gathering information.

In addition, North Korea's limited broadband internet makes hacking all but useless as a means of acquiring intelligence.

To underline the nation's lack of widespread modern infrastructure, Coats referenced a NASA satellite image of North Korea at night. "There's one dark area with no lights on. And that's North Korea."

Still, illuminating details do break through this intelligence blackout from time to time — and it's the North Koreans themselves who help.

Through its own propaganda, the regime sometimes reveals details that foreign intelligence analysts can make use of. That's when people like Scott LaFoy, an imagery analyst focusing on East Asian missile programs, jump into action.

At least publicly, there aren't a lot of people who do what LaFoy does.

"I look at the pictures and videos that missile programs around the world release, and I try to figure out what they're telling me and what they're not telling me," LaFoy says.

For example, when North Korea showed off its weapons in a military parade earlier this year, it wanted the world to see its might. Reporters from other countries were invited to be on hand and take photos.

The parade included 'Pukkuksong' submarine-launched ballistic missiles on wheeled transports. LaFoy, along with the open-source analysis community he works with, saw some telling details in those images.

Some of the things that caught his eye included, "weld lines, where panelling is, all the markers down the side. And more importantly, these sort of circles that encompass the entire thing," LaFoy says.

"This is indicative of a new type of airframe in use … a filament-model airframe. It's much lighter, which would increase the range of the missile," LaFoy adds.

"It would indicate they're moving on to more modern missile production practices."

LaFoy describes how analysts, armed with a few propaganda images, were also able to identify tiny and seemingly unimportant details in the background to figure out where Kim Jong-un was during a particular missile launch (watch his walk-through here). Using a photo of the North Korean leader standing on a road, along with another photo where a tiny piece of a road sign showed through a camouflage mesh behind him, they narrowed his location down to one very likely spot.

The location helped confirm that North Korea's missiles were mobile, rather than being restricted to dedicated launch sites. 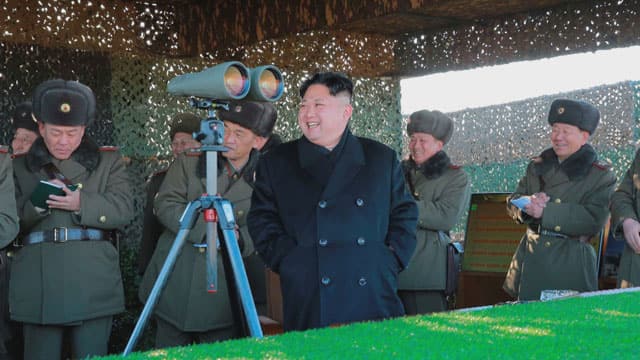 Images can also give clues to where a specific technology came from.

"One of the most controversial things at the moment is the accusation that the engines that they are using for their new, heavier, liquid propellant systems have origins in Soviet missile technology," LaFoy says.

That claim — far from confirmed as fact by the analyst community — is rooted in pictures of North Korean engine tests. Some specialists see design similarities with Soviet-era technology, which may have been leaked in the disarray following the collapse of the Soviet Union.

"A lot of scientists were suddenly unemployed and had a very valuable skill set," LaFoy says referring to the Soviet Union's collapse.

"We know that in the '90s, the Russians stopped at least one set of design bureau scientists from a missile design institute who were flying to Pyongyang for 'vacation.'"

Not lost on LaFoy is the idea that all this analysis may seem like enthusiasts sweating over inconsequential details.

"Some people do say, 'Why go into this amount of granular detail?'," LaFoy says. "It tells us how their program is set up. How their scientists may be employed. How their operations are considered. So this gives us a better picture of what the threat actually is."

LaFoy is also aware the propaganda he studies is automatically tainted by potential North Korean counterintelligence.

"We know that they know we can see it," LaFoy admits, referring to seemingly small but important details that are included in photographs that come out of North Korea.

"Sometimes we do think they're careless, [but] they're not dumb by any means. So it's sort of a constant struggle to try and verify and find markers."

"It does play a vital role," says the veteran who blew the whistle in 2012 regarding the failing state of the war in Afghanistan.

"If you find out that the intelligence says they do have the ability to fire at least a medium-range ballistic missile with a nuclear warhead, you need to know that."

"Nothing's ever perfect, it's only a best estimate," he says of the work intelligence analysts do. "But we just have to make sure that we do the very best we can … and do our very best to present a honest, clear evaluation of what's going on."

LaFoy also sees intelligence-gathering as a way of fighting propaganda and the North Korean regime's messaging.

"To some degree, [Kim Jong-un's] goal is to be a scary missile power —  firing big, fancy, threatening missiles so that people just focus on those," LaFoy says.

"And so we want to make sure we have a realistic idea of what's going on and not just listen to what he's telling us with his launches."