A closer look at the day's most notable stories with The National's Jonathon Gatehouse: Tesla CEO Elon Musk fires back at critics; Israel's extensive border wall with Gaza is being beefed up; making a claim to Everest fame is becoming increasingly difficult

Elon Musk is having a Donald Trump moment.

Yesterday, the Tesla CEO took to Twitter to fire back at his critics amid a flurry of negative media reports about his electric car company and the safety of its vehicles.

What’s actually amazing about this accident is that a Model S hit a fire truck at 60mph and the driver only broke an ankle. An impact at that speed usually results in severe injury or death.

Musk has taken issue with the widespread coverage of an accident this past weekend involving one of the company's new Model S sedans. The vehicle slammed into the back of a stopped fire truck at red light outside of Salt Lake City on Friday evening, at a speed of almost 100 km/h.

The driver's failure to brake or take any evasive manoeuvres has led to speculation that the car's autopilot feature might have been involved in the crash, although police and Tesla both say they have yet to determine the circumstances.

The Utah crash came the same day that the National Transportation Safety Board launched an official investigation into a fiery May 8 wreck of a Model S that killed two high school students outside Fort Lauderdale, Fla. The probe will look at how firefighters can best extinguish blazes involving the company's electric vehicles and their lithium-ion batteries.

The NTSB is already investigating three other Tesla accidents, with a specific focus on their autopilot system. At least two U.S. drivers have died in crashes while using the feature.

The Wall St. Journal published a report yesterday alleging that Tesla engineers had expressed concerns about the safety of the enhanced cruise control system, suggesting that more sensors were needed to ensure that drivers keep their eyes on the road and their hands on the wheel. But Musk and other senior executives rejected the proposed measures as too costly and unnecessary, the paper says.

This, too, raised the ire of the billionaire inventor.

"This is false," Musk wrote in a reply to a tech site's tweet flagging the Journal story. "Eyetracking rejected for being ineffective, not for cost. WSJ fails to mention that Tesla is safest car on road, which would make article ridiculous."

The testy outbursts came on the same day that Musk announced a "thorough reorganization" of the car maker. In an internal company email, Musk said he will be "flattening the management structure to improve communication, combining functions where sensible, and trimming activities that are not vital to the success of our mission."

The shake-up follows the departure of several senior Tesla executives in recent weeks, including Matthew Schwall, the man in charge of the company's self-driving system. Doug Field, the senior vice-president of engineering, has taken a leave of absence to "recharge and spend time with his family," according to a company spokesperson. Tesla won't say when he is set to return.

Tesla has had significant difficulty ramping up production of its new Model 3 sedan, its entry into the mid-price market.

Earlier this month, Musk said he planned to add more humans to the highly automated line. And over the weekend, he disclosed that the company is sponsoring a "hackathon" to seek solutions to "fix the 2 worst robot production chokepoints."

Tesla finally delivered its first Model 3 to a customer outside of the United States, a buyer from Kingston, Ont., just last week.

The company started making the cars last July, and is currently producing approximately 2,600 per week.

The border between Israel and Gaza is one of the world's most heavily fortified frontiers.

It features a 60-kilometre-long interior fence, separated by a road, razor wire and other security measures from a second, earth-and-concrete barrier studded with observation towers and gun emplacements. There are tanks and snipers, motion detectors, night-vision and thermal imaging cameras, and drones.

Palestinians have been prohibited from coming within 300 metres of its edge since 2008.

Even before yesterday's deadly protests, where Israeli soldiers shot dead 59 people and wounded 1,360 more as they approached the fence or gathered nearby, there were plans afoot to make the border even harder to breach.

In January, the Israeli military showed off a new underground wall around Gaza that it said it hopes will stop Hamas and other militant groups from tunnelling under the existing defences to launch attacks inside the country.

The $870 million US project has been underway for more than a year, and is expected to be completed in 2019. Built using foundation construction techniques, the concrete-and-metal barrier will be sunk as deep as 100 metres in some sections, and topped with a 9-metre-high fence above ground.

An accompanying network of sensors to detect digging and underground movement is almost complete. And a so-called "see-shoot" system of remote-controlled guns, cameras and sensors — already in place along the border with Egypt — will be added to the defences.

Israel built its first Gaza fence in 1994, shortly after the Oslo Accords. But it was repeatedly breached during the first Intifada, and replaced by the larger, current barriers in late 2000 and early 2001.

Years of checkpoint bombs and attempted incursions by militants have seen it successively strengthened.

Countering tunnels became an obsession after Hamas used one to stage a cross-border raid in 2006, killing two Israeli soldiers and capturing another, Gilad Shalit. He was swapped for 1,000 Palestinian prisoners five years later.

The most recent tunnel was detected and destroyed by an airstrike on Saturday night, before it ever reached the fence, according to the Israeli military.

The Gaza fence was successful enough in deterring attacks that it became the model for the barrier that now surrounds much of the West Bank.

And it has made Israel a world leader in border security technology. The Trump administration has looked at implementing some of its "smart border" surveillance and detection systems along America's southern frontier, and an Israeli firm was one of eight companies asked to showcase prototypes for the president's "big, beautiful wall" with Mexico last fall.

Every spring, hundreds of would-be conquerors of Mount Everest camp on the shoulders of the Himalayan giant, waiting for a break in the weather and a chance to make the summit.

Yesterday was one of those bright and clear windows, allowing a few dozen more people to add their names to the list started by Sir Edmund Hillary and Tenzing Norgay in May 1953.

Among the most notable was Steve Plain, an Australian who set a new speed record for climbing the Seven Summits — the highest peaks on each continent. That it took him only 118 days to complete the circuit would be remarkable enough, but the feat also came just four years after he broke his neck in a surfing accident and was told that he might never walk again.

Then there is Xia Boyu of China, who lost both his feet during a failed Everest attempt in 1975, later had both legs amputated due to cancer, and finally reached the summit on prosthetic limbs yesterday on his fifth attempt.

But finding a claim to Everest fame is becoming increasingly difficult.

Last year, 648 people made it to the top — a full 61 per cent of those who waited at base camp — the second-highest number on record after the 658 in 2013. Which brought the total of successful summits of the world's highest mountain to 8,306 by 4,833 different people.

Becoming a "first" is more challenging.

Solo climbs, ascents without oxygen, and national champions were determined decades ago.

A Nepalese couple were married on the summit in 2005.

Indian twins climbed it together in 2013.

Erik Weihenmayer of the United States became the first blind person to reach Everest's pinnacle back in 2001.

There have been successful climbs by hemophiliacs and people with cystic fibrosis. And by all types of amputees. (Boyu isn't the first person missing both legs to make it to the top. Mark Inglis of New Zealand did it a dozen years ago.)

Last June, Ian Toothill of the U.K. became the first terminal cancer patient to climb Everest, raising $55,000 for charity in the process.

Nepal has tried to discourage such attempts, instituting a ban on blind and disabled climbers last December. But the regulation didn't survive a court challenge.

However, if you dream of Everest glory, the number that you should keep in mind in 292. That's how many people have died trying to reach the top. Six more names were added to that sad list in 2017.

"They rented the house next to him in Mexico, four or five of them. He can't open his blinds, he can't go anywhere without being followed, and really it's quite atrocious and intrusive — and I think it's highly unethical. He was really having heart pains and suffered a heart attack, it was an unbelievable amount of stress."

May 15, 1945: Germany surrenders - the first Canadians into Berlin

It took more than a week for the news to make it back home, but two Canadians were on hand for the official signing of Germany's unconditional surrender in Berlin on May 7, 1945. Flight Lt. Mike Carmichael and Sgt. Larry Pincombe were both members of the RCAF police unit and assigned to escort the bigwigs. In this CBC Radio report they share tales of drunken German generals, victory feasts among the ruins, and female Russian barbers. 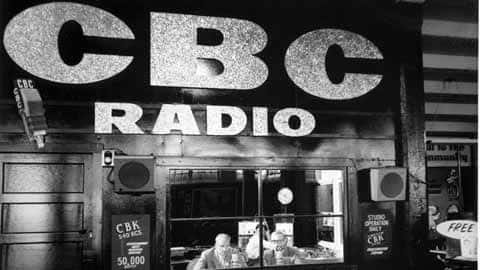