A closer look at the day's most notable stories with The National's Jonathon Gatehouse: Colourful, controversial Roger Stone arrested in U.S. election tampering investigation; Oscar nomination pits rising director against grieving family; a look at women who are composing music for films.

The weird world of Roger Stone

Roger Stone had been predicting his own arrest for months.

He was so certain that it would happen on a Friday — the day special counsel Robert Mueller tends to convey grand juries in search of indictments — that he stopped making weekend restaurant reservations.

Although it's fair to say that this morning's 5:30 a.m. wake-up call from heavily armed (and currently unpaid) FBI agents at his home in Fort Lauderdale, Fla., took him by surprise.

The 66-year-old Republican operative, pundit and occasional White House advisor becomes the 37th person to be indicted or plead guilty in Mueller's ongoing investigation into Russian interference in the 2016 U.S. election.

But he is, without a doubt, the most colourful alleged conspirator to date. And the only one to rate his own Netflix documentary.

Exhibit 1 remains the tattoo of the smiling face of Richard Nixon between his shoulder blades, a reminder of his beginnings as a political dirty trickster in the service of the late Republican president.

(Stone maintains that he never played a part in the Watergate break-in, but his FBI file offers a lengthy litany of political misdeeds, including planting false information, spying on opponents, and making pay-offs.)

not seeing enough Roger Stone Nixon tattoo content this morning <br><br>doing it myself <a href="https://t.co/0VviTezrgk">pic.twitter.com/0VviTezrgk</a>

Stone proudly claims to be the father of negative advertising in U.S. politics, employing it during his work on behalf of Ronald Reagan and George H.W. Bush — even if he has sometimes shifted the full blame for the infamous Willie Horton ad onto his late friend Lee Atwater.

His links to Trump date back to the 1990s, when he lobbied on behalf of his casinos. And he was among the billionaire's earliest political backers, working on his mostly fanciful campaign for the Reform Party presidential nomination in 2000.

Stone is a clotheshorse, boasting that his New York apartment is stuffed with more than 500 suits and sport coats, and offering fashion advice like "plush velvet conjures up kings and opulence. Crushed velvet conjures up pimps and hookers," via his web columns.

(Fun fact: he was once famed for his distaste of socks, which got him in trouble with Nancy Reagan.)

Stone has suggested that much of his public persona is an act.

"Don't confuse Roger Stone with the character I play," he told the New York Times in 2017.

But he has a history of making intemperate public remarks, and was banned from Twitter after a series of profanity-laced threats against various CNN personalities.

Today's indictment suggests that he is no less volatile in his private emails and texts, citing a series of increasingly hostile messages to others in the Trump/Wikileaks orbit, culminating in a vow to kidnap one man's therapy dog.

In recent years, Stone has found a home on far-right conspiracy websites like the Daily Caller and Infowars. And he has occasionally seemed to be estranged from reality.

Stone claims that he survived a 2016 assassination attempt — via radioactive polonium poisoning — suggesting it was a bid to "frame Russia" and feed the Trump collusion narrative.

And after a 2017 hit-and-run traffic accident in Florida, Stone claimed that it was another attempt on his life by "deep state assassins."

It is therefore somewhat fitting that his arrest this morning was witnessed by another figure from America's cultural fringe, former NFL receiver and failed Dancing With the Stars contestant Chad Johnson.

FBI arrested my neighbor Roger before my morning jog, I’ve only seen shit like that in movies, crazy to start to my Friday

Stone says he will plead not guilty to the charges, and has no intention of flipping on President Trump.

"I intend to tell the truth," he told reporters following his appearance before a Florida judge this morning. "I am one of his oldest friends ... I believe he is doing a great job."

Over the years, the political gadfly has coined a number of "Stone's rules," publishing them in a book earlier this year.

"It's better to be infamous, than never famous at all," might be the one he is clinging to today.

Detainment and a dumpster Fyre

This week, the Academy of Motion Picture Arts and Sciences announced who it would honour on Hollywood's biggest night. In other words, it's time to figure out your Oscar ballots. The nominations are provoking the usual speculation around who got the nods, who got snubbed, and why — but one is fuelling an increasingly thorny controversy. It's over a short film called Detainment, and it's pitting a rising filmmaker against parents reliving an unimaginable tragedy, writes producer Tarannum Kamlani.

In 1993, Britain was rocked by a murder so shocking, so unthinkable, that it gripped the public imagination for years. Twenty-five years later, that case is back in the public eye because of a controversial film that's nominated for an Oscar in the best short feature category.

Detainment is the story of two 10-year-old boys who were captured on CCTV luring a toddler named James Bulger away from his mother at a Liverpool shopping centre.

They tortured him to death, and his body was found two days later on some abandoned train tracks.

Irish filmmaker Vincent Lambe has made a 30-minute film based on the transcripts of interviews police conducted with the boys. That film is an Oscar nominee in the best short feature category.

Lambe says as a society we have a responsibility to move beyond treating the murderers as evil monsters and to try and understand what happened.

He also, by his own admission, did not feel the need or obligation to inform James Bulger's family about his film, since he based it on facts that are in the public domain.

Bulger's mother, Denise Fergus, says she is disgusted by the film and its Oscar nomination. More than 160,000 people have signed a petition agreeing with her, calling for the Academy to rescind the nomination.

Lambe, for his part, has expressed regret since the controversy erupted and spread, but won't pull his film from contention.

The anger over Detainment comes the same week that Netflix apologized to the people of Lac Megantic, Que., for using images of the massive rail explosion that devastated the town and killed 47 people in two of its popular dramas, Bird Box and the series Travellers.

All of this got the Pop Panel team thinking: what are the real-world consequences of art appropriating lived experiences, especially traumatic ones?

And this doesn't just apply to Detainment — this year's Oscars includes a healthy crop of nominated films that draw from "real life" to varying degrees, including Green Book.

The film is set against the backdrop of the Jim Crow era in the southern U.S. in the 1960s. It tells the story of the unlikely friendship between black classical pianist Don Shirley, played by Oscar winner Mahershala Ali (who won a Golden Globe for his performance), and his racist Italian-American driver Tony Vallelonga, played by Oscar nominee Viggo Mortensen.

The film, co-written by Vallelonga's son, has been denounced by Shirley's family for misrepresenting the pianist. They, too, were not contacted at all when the movie was being made.

And we couldn't talk pop culture this week without including the unbelievable story around the dumpster fire that was the Fyre Festival.

The event, promoted by the rapper Ja Rule and a host of supermodels and social media influencers, became a disaster that the world watched and followed in real time as it unfolded — via Twitter, Facebook and Instagram, of course.

This week Netflix unleashed a riveting documentary about the whole thing, as did Hulu. We unpack the fascination.

Women who compose music for films are still a relative rarity in the industry, but they're optimistic about the future, entertainment reporter Eli Glasner writes.

Let me tell you a secret.

When I'm working on an item or a film review, occasionally I'll pick a t-shirt to complement the story. It's just a way of amusing myself while making use of my extensive collection of novelty tees.

So when I was getting ready to interview Canadian composer Janal Bechthold, who writes music for films and other media, I couldn't help myself. I reached for my Star Wars t-shirt.

I mean, when it comes to film music is there anyone bigger than John Williams? The soaring strains of Superman. The triumphant theme from Indiana Jones. Darth Vader's ominous Imperial March. Would Jaws be so biting without his du-dah duh-dah du-dah?

But then, on my way to Bechthold's studio, I started to have second thoughts.

Here we are working on a story about the dearth of female screen composers, and I'm waltzing into her workspace with a shirt celebrating one of the best-known dudes in the business.

Nevertheless, we pull up to Bechthold's studio and she warmly welcomes us inside. She shares the space with some other composers, and it's packed with just about every instrument you can imagine.

But there in the corner, I spy it:  a John Williams orchestral Star Wars score, proudly on display.

And when I sat down at a baby grand piano to ask Bechthold about her influences, the first thing she played?

The Star Wars theme. Like so many film composers, Bechthold admires what John Williams has accomplished.

Still, tonight's story looks at the fact that while the world of film is filled with well-known male composers, there are far fewer women to look up to. On Tuesday when the Oscar nominations were announced, all five nominees were male.

Not surprising, when you learn that of the top 250 films from 2018, only 16 feature female composers.

And yet many of the women we spoke with are optimistic about the future. Take a look at some of the biggest films of 2019, and it's women who are holding the baton.

Getting a chance to play with old man Adams.

- The most intriguing part of Special Counsel Robert Mueller's indictment of Roger Stone, a gadfly advisor to the U.S. president, alleging coordination between the Trump campaign and Wikileaks.

The day before his 19th birthday, the Great One sits down and reflects on his first NHL season with the Edmonton Oilers. Among the highlights: being among the league's scoring leaders, and an ABBA concert where one of the "girls" — it's not clear if he means Agnetha or Anni-Frid — came out on stage wearing his sweater. All in all, he's happy he signed a 20-year, $5 million personal services contract with Peter Pocklington. 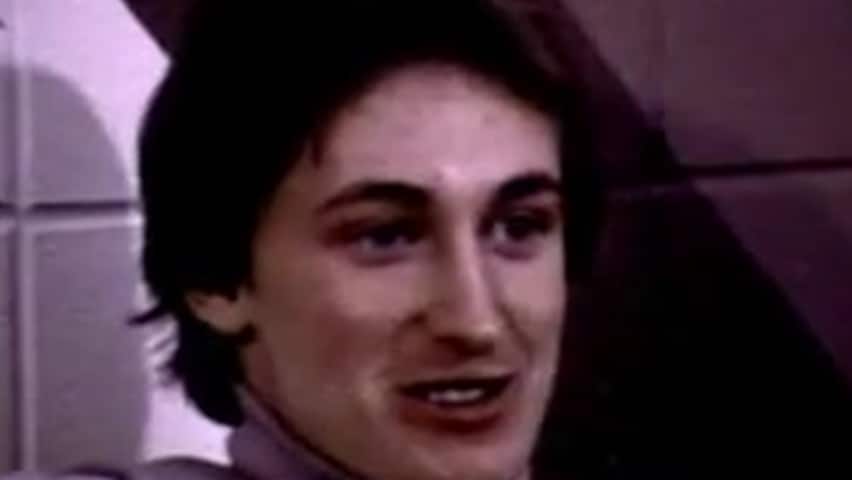