A closer look at the day's most notable stories with The National's Jonathon Gatehouse: increasing number of developed nations taking legal steps to shut out migrants; how a 'new wave' of Indigenous film is affecting culture; Sepp Blatter is back in the soccer spotlight at the World Cup

Donald Trump is not an outlier.

The U.S. president's hardline stance on immigration, and controversial policy of jailing illegal migrants and separating parents and children, reflects a larger trend happening around the world as many developed nations move to seal off their borders.

This morning, Hungary's parliament marked World Refugee Day by passing a number of new measures aimed at migrants, and making it a criminal offence to try and help them settle in the country or make an asylum claim.

The "STOP Soros" law, as Prime MInister Viktor Orban has labelled it — a reference to his government's unproven claim that U.S. billionaire George Soros is trying to undermine Europe by encouraging mass migration — includes a constitutional amendment. It spells out that an "alien population" can't be settled in Hungary, an effort to thwart any European Union effort to institute a migrant resettlement quota system.

"We want to use the bills to stop Hungary from becoming a country of immigrants," Interior Minister Sandor Pinter wrote in a preamble to the legislation.

The Hungarian government's own statistics, however, suggest that isn't an imminent danger.  There are only 3,500 refugees living in Hungary, and just 342 people registered for asylum during the first four months of 2018.

Another right-wing populist, Italy's new interior minister Matteo Salvini, has been making headlines for his refusal to let a migrant rescue ship dock in Sicily.

Now, he has made a chilling proposal to create a registry of the Roma community, expressing hopes that he will be able to deport many of them. (Giuseppe Conte, the Italian prime minister, has rejected the idea as unconstitutional, noting that it is "clearly discriminatory.")

German Chancellor Angela Merkel is under pressure to stem the flow of migrants into her country, with her Interior Minister Horst Seehofer demanding strict new border controls. If she doesn't agree, he has threatened to pull his Christian Socialist Union party out of the coalition government.

Germany, France, Italy, Spain, Austria, Bulgaria and representatives of the EU will stage a mini summit on immigration and asylum this weekend to try and hammer out a deal to limit the number of migrants amid growing pressure for pan-European border controls.

One of the ideas being floated is the creation of "regional disembarkment platforms" in north Africa. These are effectively camps where would-be migrants could be processed and accepted or turned away before they try to cross the Mediterranean.

Austria's Prime Minister Sebastian Kurz endorsed the idea today. "In Europe we face a choice," he told reporters. "Either we return to internal borders, or we secure our external borders."

Border fences in the Balkans, as well as political deals with Turkey and various factions in Libya, have already dramatically reduced the flow of migrants.

(Today, the Guardian newspaper published "Europe's migrant body count," a list of names and a visual representation of all 34,361 migrants known to have died in their attempts to reach the continent.)

Globally, more than 16 million people — a rate of 44,000 a day — were displaced from their homes last year by war, violence and persecution, according to a new United Nations report. It marked the fifth straight year of record increases, bringing the total number of exiles and refugees to 68.5 million worldwide.

And for all the attention on the problems that wealthy nations are having coping with the influx of asylum seekers, the real burden of caring for refugees rests on developing nations, where

85 per cent of all migrants live — often in extreme poverty.

Others who've fled dangers in their home nations have ended up facing new threats. In Bangladesh, where 720,000 Rohingya have sought refuge from persecution in Myanmar, authorities today admitted that they have fallen far behind in their efforts to prepare the sprawling camps for the coming monsoon rains.

About 200,000 people in camps in Bangladesh are thought to be at risk of being swept away by landslides and floods.

So far, aid groups have managed to relocate only 15,000 of them, with hopes of moving 7,000 more by the time the rains intensify at the end of the month.

The new wave of Indigenous cinema

Duncan McCue hosts a panel discussion tonight on The National about the state of Indigenous film, and the cultural impact of the new wave of creative material reaching screens in Canada and around the world.

I'm pretty sure Tonto was the first Indian I ever saw on TV.

The Lone Ranger's sidekick was a lousy role model for a little Indigenous lad. Tonto wore buckskin, spoke in pidgin English, and existed to serve the needs of "Kemo Sabe." Adding insult to injury, his name translates into "dummy" in Spanish.

As a journalist, I've spent a career working to change misrepresentations of Indigenous people in the news.

That's why I was geeking out when I got to talk to three of the smartest people in Canada's Indigenous filmmaking scene: Lisa Jackson (Anishinaabe), Alethea Arnaquq-Baril (Inuk), and Jesse Wente (Ojibwe).

They're part of the "new wave" of Indigenous cinema in Canada — Indigenous filmmakers who are tired of seeing the same old stories about Indigenous cultures on screen, and are taking matters into their own hands.

The panel was candid with concerns about who gets to tell stories in this country and the barriers Indigenous filmmakers still face.

But we also shared excitement over the explosion of new Indigenous filmmakers in recent years — Adam Garnet Jones, Jeff Barnaby, and Zoe Hopkins to name a few — and how their dramas and documentaries are changing the narrative of Canada.

We even discussed the multigazillion-dollar superhero flick Thor: Ragnarok, and how it became a tale about the bloody history of colonialism in the hands of Maori director Taika Waititi.

I hope you can grab a bowl of popcorn tonight and join us for some intelligent talk about Indigenous peoples and narrative sovereignty.

Every great sporting event needs its villain — although the organizers of the FIFA 2018 World Cup in Russia might have preferred it be someone on the field.

The ex-FIFA president is currently serving a six-year ban from the sport for "unethical conduct" — to whit, an unauthorized 2 million Swiss Franc payment to one of his friends, Michel Platini, the former head of the Union of European Football Associations (UEFA).

Blatter's ban was imposed in 2015 amid a global soccer corruption scandal and as Swiss prosecutors opened an investigation into alleged financial misconduct. The 82-year-old denies any wrongdoing and has never been charged, but his attempts to have his period of football exile reduced have all failed.

Blatter isn't supposed to have anything to do with the organization he ran for 17 years, but that prohibition apparently doesn't extend to attending its matches.

He says that Vladimir Putin — a longtime friend — personally invited him to attend this morning's Portugal vs. Morocco game, and Friday's contest between Brazil and Costa Rica. He is also scheduled to have a meeting with the Russian president.

The trip is Blatter's first foray outside his native Switzerland in almost three years. He seems to be enjoying it, posing for selfies with soccer fans at his luxury Moscow hotel and chatting amiably with reporters.

That can't make Gianni Infantino, the current FIFA president, particularly happy. He has spent the past couple of years trying to clean up what he calls soccer's "tarnished brand."

Blatter was last in the news in November, when former U.S. soccer star Hope Solo told a Portuguese newspaper that he had sexually assaulted her, grabbing her buttocks just before the two walked onto the stage together at a 2013 awards ceremony. Blatter called the allegation "ridiculous."

The survivors of the Humboldt Broncos bus crash:

Ten of the people who survived the deadly Humboldt Broncos junior hockey team bus crash reunited in Las Vegas for the NHL Awards — some together for the first time since the collision that killed 16 people. <a href="https://twitter.com/hashtag/TheMoment?src=hash&amp;ref_src=twsrc%5Etfw">#TheMoment</a> <a href="https://t.co/Xls0iulecP">pic.twitter.com/Xls0iulecP</a>

"The thought that they are going to be putting such little kids in an institutional setting? I mean, it is hard for me to even wrap my mind around it. Toddlers are being detained."

- Kay Bellor, vice-president of Lutheran Immigration and Refugee Service, reacts to the news that the Trump administration is placing babies and young children, who are being separated from their migrant parents, in three "tender age" shelters in South Texas.

Smoke in hand and a drink before him, Mordecai Richler unveils Quebec's newest literary prize for "ethnic" writers, dedicating it to the eternal mockery of the province's then-premier and his infamous suggestion that the 1996 sovereignty referendum was lost due to "money and the ethnic vote." Richler adds, "I think ridicule is much more appropriate than anger." 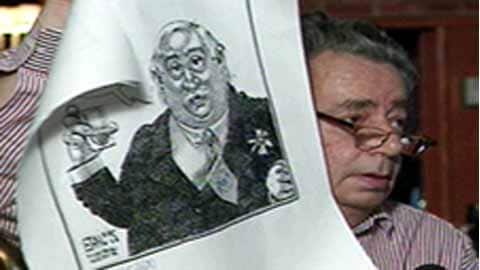