A closer look at the day's most notable stories with The National's Jonathon Gatehouse: Quebec election marks great unravelling of provincial politics; Amazon is hiking its minimum wage; International Court rules Chile doesn't have to negotiate sea access for its landlocked neighbour Bolivia

For almost 50 years, there were two items on the menu for Quebec voters — sovereignty or federalism.

Now it's a political smörgâsbord.

Last night, the centre-right Coalition Avenir Québec (CAQ) — launched as a "third option" in 2012 — swept to power, capturing 37.4 per cent of the popular vote and 74 of the province's 125 seats.

"Today, we have made history," François Legault, the CAQ leader and new premier-designate, proclaimed in his rowdy victory speech. "There are many Quebecers who have demonstrated that it is possible to have yesterday's adversaries work together, to work for the Quebec of tomorrow, together."

His victory marks the first time a party other than the Liberals or the Parti Québécois will form government in the province since Daniel Johnson Sr.'s Union Nationale in 1966.

Philippe Couillard's Liberals will form the official opposition, with 32 seats — down from 68 when the writ was dropped in late August.

But the biggest loser of the night was the PQ. It finished fourth, with nine seats and 17 per cent — another historic worst — of ballots cast, behind the upstart, leftist Québec Solidaire, which won 10 ridings.

The CAQ ran on a platform of lower taxes, more money for families, more private health care and, most controversially, reduced immigration.

For the first time in two generations, Quebec independence wasn't really an issue in the campaign. Instead, this was a "change" election, with 73 per cent of Quebecers having headed into the campaign expressing a desire for different government after 13 of the last 15 years under Liberal rule.

How much has Quebec's political landscape altered in recent years?

A Léger poll released last week puts support for sovereignty at 37 per cent. But perhaps more tellingly, the same survey found little appetite for the labels of the past, with only 48 per cent of francophones saying they consider themselves "purely Quebecois" or even "Quebecois first" — down from 60 per cent in 2011.

A third of respondents said they consider themselves as much Canadian as Quebecers, with another 23 per cent identifying with country over province.

That's sounds significant, although history shows that support for independence has waxed and waned over the past six decades. But as the issue fades as a rallying point, the long-term federalist and sovereigntist coalitions are splintering apart.

In this election, that turned out to be a bigger problem for the PQ, with the CAQ taking in the economic nationalists, and Québec Solidaire cannibalizing the party's progressive wing. (The PQ didn't win a single seat in Montreal or Quebec City, and even leader Jean-François Lisée lost his riding.)

Provincial Liberals should be uneasy as well.

In the new, four-party universe, the Liberals captured just under 25 per cent of the vote — the party's worst showing since 1867.

Past success is no guarantee of future performance in Quebec — just ask the federal NDP.

But even if the CAQ is just the flavour of the moment, Quebecers' tastes appear to be evolving.

Jeff Bezos, the founder and CEO of Amazon — now worth $165 billion US, up $66 billion this year alone — has decided it's time to share some of the wealth with his employees.

The Seattle-based e-commerce giant today announced that it will hike its minimum wage for all U.S. workers to $15 an hour, an increase of as much as 36 per cent. The change, which will start next month, will affect some 350,000 full, part-time and temporary staff, and also applies to the Amazon-owned Whole Foods grocery chain.

The company's 40,000 employees in the U.K. will be receiving a similar raise, with the minimum wage rising in London to £10.50 an hour ($17.47 Cdn) and a pound less across the rest of the country, a significant improvement on the government-mandated £7.83-an-hour wage floor.

The company also says it will now use its economic muscle to push for better pay everywhere it operates, including a hike in the U.S. federal minimum wage which has been stuck at $7.25 an hour for almost a decade.

"We listened to our critics, thought hard about what we wanted to do, and decided we want to lead," Bezos said in a statement. "We're excited about this change and encourage our competitors and other large employers to join us."

The move comes after years of criticism and worker protests over the company's tight-fisted salary practices.

The findings came on the heels of a study by an Ohio think think tank last winter that discovered that one in 10 Amazon workers in the state were receiving such benefits.

This July, the company announced a third-quarter profit of $2.5 billion US on almost $53 billion in sales, a new record, and the third straight quarter that Amazon profits topped the billion mark.

But thus far, most employees hadn't been sharing in the windfall.

Amazon's annual proxy report, filed this summer, showed strong salaries around its Seattle HQ — $110,000 on average — but a much lower median pay of $28,466 a year for the bulk of its U.S. workforce.

The same report showed that Bezos — the owner of 16 per cent of the company's shares — took home:

Amazon is not alone in hiking its minimum pay. Target raised its wage floor to $12 a hour last March, as part of a company commitment to hit the $15 an hour threshold by the end of 2020. And Walmart now pays at least $11 a hour in the United States, an increase that the company credited to Donald Trump's deep cuts to corporate taxes.

But the thing that is really driving industry largesse is a shortage of labour.

The U.S. unemployment rate stood at 3.9 per cent in August, and there are a record 6.7 million unfilled jobs.

The U.K. service sector is under similar stress as EU workers look elsewhere due to Brexit uncertainty.

Sometimes a change of heart is simply good business.

You can stop planning that Bolivian beach vacation.

Yesterday, the International Court of Justice ruled that Chile is under no obligation to negotiate sea access for its landlocked neighbour.

The dispute dates back to the 1879-1883 War of the Pacific, a conflict that started over nitrate mines and taxation, and ended up with Bolivia losing 120,000 square kilometres of its territory, including a 400 km stretch of coastline.

Bolivia's leftist President Evo Morales filed a legal challenge with the world court in the Hague in 2013, in an attempt to force the Chileans to return some of the land. He argued that his country's economy is being harmed by its diminished sea access.

A panel of 15 judges yesterday rejected that argument by a 12-to-3 margin, although their ruling holds out hope that both parties might find the "willingness" to undertake "meaningful negotiations."

Morales, who was present in the Hague for the verdict, sounded a note of defiance.

"Bolivia will never give up," he told reporters afterwards. "The people of the world know that Bolivia had an invasion and we had our sovereign access to the Pacific Ocean taken away from us."

Chilean President Sebastián Piñera hailed the decision and characterized the court case as a giant waste of time.

"President Morales raised false expectations among his people ... and made us waste five years which could have been spent building a healthy relationship between the two countries," he said to the media in Santiago.

The reality is that Bolivia and Chile haven't had diplomatic relations since 1978, and have been estranged for the better part of 60 years. Piñera's government is currently pursuing its own case against Bolivia at the Hague over Morales' threats to divert the Silala River, one of the few sources of water in the parched Atacama region.

Bolivia retains preferential access to two northern Chilean ports under the terms of a 1904 peace treaty, and two-thirds of its trade passes through its neighbour. But the true value of the lost territory is undoubtedly in its vast copper deposits, rather than the saltwater coastline.

To this day, Bolivia has a 5,000-strong Navy which patrols the country's rivers and maintains a motley fleet on frigid Lake Titicaca. And every March 23rd, the country celebrates the Day of the Sea with a parade where thousands march through the streets of La Paz carrying model boats and pictures of the ocean, then halt for five minutes of silence as loudspeakers pipe in the sounds of surf and seagulls.

And not giving up is a national virtue in Bolivia.

Every school child knows the story of Col. Eduardo Albaroa, who died in the first great battle of the Pacific War. Surrounded by Chilean forces in the high desert town of Calama, he refused to capitulate.

His immortal final words, "Surrender? Your grandmother should surrender, f**k!," are inscribed on statues throughout the country.

A major political shift in Quebec.

"Obviously we need to celebrate women physicists, because we're out there. And hopefully in time it'll start to move forward at a faster rate, maybe."

- Canadian Donna Strickland, the first woman to win a Nobel prize in Physics in 55 years. The University of Waterloo associate professor shares the $1.29 million award with an American researcher and a French scientist.

Just under 11 months after the Berlin Wall fell, Germany undergoes an even more seismic shift as East and West merge into one nation. Joe Schlesinger reports from outside the Reichstag amid the fireworks, choirs and dancing crowds. 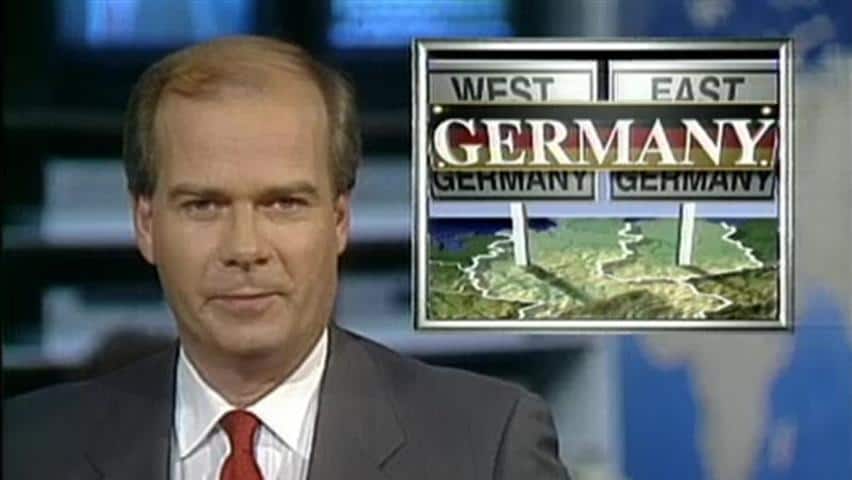