The politics of papal apologies

In his 27 years as leader of the world's Roman Catholics, Pope John-Paul II travelled to Canada three times.

The first-ever papal visit, in the fall of 1984, was tied to the 200th anniversary of the Church in Newfoundland.

In September 1987, he returned for a single day to visit the Northwest Territories town of Fort Simpson — making up for a planned 1984 stop that had to be cancelled due to bad weather.

And in the summer of 2002, the frail and elderly Pontiff came to Toronto to celebrate World Youth Day.

But his current successor, Pope Francis, won't visit Canada to make an apology for the Catholic Church's role in residential schools, despite the pleas of survivors and a formal request by the prime minister.

More than 150,000 Indigenous children were separated from their families and forced to attend the schools between the 1880s and the final closure in 1996, often suffering physical, sexual and psychological abuse.

The Catholic Church and its affiliated organizations ran more than 70 per cent of the 132 institutions.

The federal government apologized for Canada's role in 2008, and has provided billions in financial compensation for survivors.

The papal visit and personal apology was one of the 94 recommendations stemming from the final report of Canada's Truth and Reconciliation Commission on residential schools in 2015.

"The Holy Father is aware of the findings of the Truth and Reconciliation Commission, which he takes seriously," Bishop Lionel Gendron, president of the Canadian Conference of Catholic Bishops, wrote yesterday in an open letter to the Indigenous Peoples of Canada.

But a papal apology will not be forthcoming, he added, as "after carefully considering the request and extensive dialogue with the Bishops of Canada, he felt that he could not personally respond."

The letter did not provide an explanation for the Pope's decision, but holds out the possibility of a future visit in which "an encounter with the Indigenous Peoples" would be a  "top priority."

The Bishop wrote that the Church in Canada will instead dedicate itself to "reconciliation at the local level."

Papal apologies weren't really a thing prior to John Paul II. But the Polish-born Pontiff had a deep desire to address past wrongs, issuing his first Pia Culpa in 1992 over the Church's treatment of the astronomer Galileo, and continuing on to issue more than 100 of them — to Jews, women, victims of the Inquisition and many others — over the next two decades.

As the new millennium dawned, the Pope even issued a sort of blanket request for forgiveness, apologizing for all of his church's errors over the prior 2,000 years.

''Recognizing the deviations of the past serves to reawaken our consciences to the compromises of the present,'' he told congregants at St. Peter's Basilica.

The next pope, Benedict, wasn't as keen on the practice, but issued a notable apology to victims of sexual abuse by Catholic priests in Ireland in 2010. He expressed his personal "shame and remorse" over the "serious sins committed against defenceless children."

For his part, Pope Francis has already apologized to gays and lesbians, and in a meeting at the Vatican he asked Rwandan President Paul Kagame to forgive the church's role in his country's 1994 genocide.

Most recently, Francis' meeting with Chilean survivors of sexual abuse produced a qualified apology that may have done more harm than good to the Pontiff's reputation.

It's hard to say if that publicity debacle has influenced his decision about a visit to Canada. But there also seem to be financial concerns.

When the country's Catholic bishops met last fall, a papal visit was not on their agenda.

Bishop Douglas Crosby of Hamilton explained that such trips require careful consideration, "because it can be really expensive."

"That's why there is a lot of discussion with government and with other agencies," he told the Catholic Register.

Francis' schedule for the remainder of 2018 includes trips to Switzerland, Ireland and the Baltic States.

It's only been three months since China imposed severe restrictions on the amount and types of garbage it takes from other countries for recycling.

And the world is already feeling the pinch.

Take household plastics, for example. Last year, the People's Republic took in an estimated 7.3 million tonnes of it. But now, such junk is among the 24 different types of recycled material that are no longer accepted.

And what little garbage China is still willing to take in must pass a near-impossible purity benchmark — under 0.5 per cent cross-contamination — to get through.

That has left municipalities across North America and Europe struggling to deal with the new reality: all of a sudden no one will pay for the contents of their blue boxes, or even take their trash for free.

The result has been ever-growing stockpiles of recyclables, or reusable material being chucked into landfills.

In places like the United Kingdom, where there isn't space for either stop-gap option, it's simply being burned.

CBC News is examining the world's recycling challenges in an ongoing series called Reduce, Reuse and Rethink. Tonight, The National looks at the chaos caused by China's decision, and the new destinations for all those unwanted recyclables.

In this preview, Adina Renee Adler from the Institute of Scrap Recycling Industries explains how China's rules are so strict that even wanted materials are being rejected:

Join the CBC's online Facebook conversation about the recycling series and possible options for dealing with the crisis here.

Scientists have discovered the remains of more than 80 ancient settlements deep in the Amazon jungle, challenging previous assumptions about where indigenous peoples lived before the arrival of Europeans.

The sites, in the Upper Tapajós Basin, near Brazil's border with Bolivia, were first identified via satellite imagery, and then explored on foot.

Along with shaped earthen trenches, known as geoglyphs, researchers found plentiful evidence of human habitation, including charcoal, ceramics, stone tools and animal bones. Carbon dating says the settlements were at their height between 1250 and 1500.

Their findings, published Tuesday in the journal Nature Communications, suggest that many more sites remain to be discovered. The research indicates that the region — previously considered to be too dry to support large settlements — could have once been home to up to 1 million people.

Meanwhile in the U.K., a highway expansion project has uncovered a multitude of settlements, monuments and burial mounds dating from the Neolithic period all the way up to Medieval times.

More than 200 archaeologists were employed on the excavations along a 33 kilometre stretch of the A14 in Cambridgeshire, north of London.

They found that the rural landscape, long devoted to agriculture, was once teeming with activity. Three prehistoric henge monuments indicate the presence of large Neolithic ceremonial sites.

There was also evidence of a Roman trade hub and an Anglo-Saxon frontier, marked by huge ditches, a large gate and a hilltop beacon.

Also discovered were the remains of the homes and workshops of a large Medieval village, abandoned at some point in the 12th century, probably when the nearby woods became a royal hunting preserve.

So far, more than 7,000 artifacts dating from several periods were recovered, including musical instruments, jewelry, and a 2,500-year-old timber ladder.

Meanwhile, across the Irish Sea in Dublin, digging for a new luxury hotel project has uncovered an "extraordinarily well-preserved" Viking compound.

A series of medieval dwellings and rare artefacts have been uncovered during a dig in Dublin <a href="https://t.co/0Yi9Fh14Js">pic.twitter.com/0Yi9Fh14Js</a>

The four homes, each with gardens and cobbled yards, date back to the 11th century. Archaeologists have found shoes and wooden utensils preserved in the boggy ground, along with decorated stick pins and carved bone objects.

Their most tantalizing discovery was a piece of Viking graffiti carved onto a discarded piece of slate. The drawing depicts a warrior on a horse, with his shield and sword, along with two birds.

Perhaps the idle scratching of a teenager, just as bored 1,000 years ago as they are today.

"Out of 99 per cent I have maybe 1 per cent of hope. Whatever it was has given them a very small chance of survival. But they're going to be invalids for the rest of their lives."

- Viktoria Skripal, the niece of the former Russian intelligence agent Sergei, tells the BBC that her uncle and cousin will never fully recover from their poisoning by a nerve agent.

Someone once took Rael seriously enough to invite him to testify before the U.S. Congress. At the time, the Quebec cult leader and man-bun enthusiast was making headlines with his claims to be at the forefront of human cloning research. "Thankfully, nothing can stop science," proclaimed the former race car driver. Although as Adrienne Arsenault reported, there was some scepticism. Well-founded, apparently. In December 2002, the Raeliens claimed to have cloned the first human child and said they would soon furnish scientific proof. The world is still waiting. 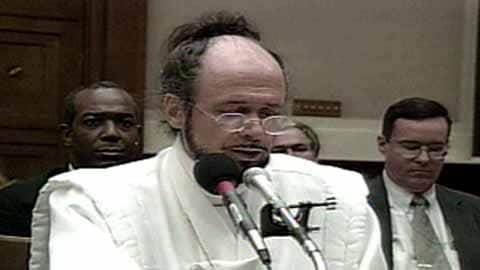