A closer look at the day's most notable stories with The National's Jonathon Gatehouse: tougher anti-migrant policies in Europe are leading to more deaths at sea, experts warn; Creed II may be Hollywood how-to for sequels; residents of Paradise, Calif., want answers about problems with evacuation.

So far this year, at least 631 African migrants have died while attempting to reach Spain, a threefold increase from all of 2017.

"This is usually a time of slowing down on these routes, that is not happening in Spain," Joel Millman, an IOM spokesman, told a news briefing in Geneva this morning.

In one of the deadliest incidents, earlier this month at least two dozen North African migrants drowned in stormy seas near Cadiz, within sight of the Spanish shore.

But it appears to have had a knock-on effect, pushing the migrants further and further west.

Some are now even arriving in the Canary Islands, a Spanish archipelago 100 kilometres off the Moroccan coast. At least 36 migrants have died trying to make that crossing in 2018, compared to one the year before.

Migrants are also now being plucked from the sea off the British coast, with at least 76 people rescued from nine boats off Dover over the past two weeks, although it appears that they are making the crossing from France.

Yet despite the concerns over the rising death toll, many European nations seem focused on enacting even tougher anti-migrant policies.

This week, prosecutors in Sicily moved to seize a migrant rescue vessel operated by Medecins Sans Frontières and another aid organization, accusing the groups of illegally dumping of 24 tonnes of "potentially toxic waste" during stops in Italian ports.

MSF rejects the charges, saying it followed standard procedures while disposing of the food, clothing and medical waste left behind by rescued migrants. But the dispute is keeping the vessel docked in southern France, rather than patrolling the Mediterranean.

And soon, Italy's parliament will vote on a new immigration law proposed by the populist government that will remove humanitarian protections for migrants and block asylum seekers from accessing services. These are moves that UN human rights experts have said will "certainly" violate international law.

Meanwhile in Hungary, Prime Minister Viktor Orbán is ratcheting up his attacks on the European Union, calling it a "transport agency" for migrants that hands out funds and "anonymous bank cards" to "terrorists and criminals."

"This is the kind of slippery slope which could again lead to a broken Europe," Orbán declared today in an interview on Hungarian public radio.

Anti-immigrant sentiment is undeniably on the rise in Europe.

This week, the Guardian newspaper crunched the voting results from 31 European elections over the past 20 years. It found that populist parties have tripled their support and managed to put their leaders into positions of power within 11 different governments.

And yesterday, Hillary Clinton issued a warning to Europe's politicians, saying that they need to solve the migrant crisis if they want to stop the rise of the far right.

"I think Europe needs to get a handle on migration, because that is what lit the flame," the former U.S. Secretary of State said in an interview.

"I admire the very generous and compassionate approaches that were taken, particularly by leaders like Angela Merkel, but I think it is fair to say Europe has done its part, and must send a very clear message — 'We are not going to be able to continue to provide refuge and support' — because if we don't deal with the migration issue it will continue to roil the body politic."

To date in 2018, 2,075 migrants have drowned or gone missing while crossing the Mediterranean.

Expectations were high for Creed II. And by both critical and commercial standards, it looks like the bar has been surpassed with this renewed franchise about the sweet science.

Creed, which came out in 2015, made superstars of actor Michael B. Jordan and director Ryan Coogler (he went on to direct a little movie called Black Panther).

It scored big at the box office, taking in $173.6 million US — on a $40 million budget — and got a coveted New York Times Critic's Pick check mark.

So what is this multi-sequel narrative doing right?

Both movies have won their raves for honouring the Rocky films of the 1970s and 80s without pandering to their cliches. Stallone's best instincts were at play in the first Creed, so much so that he was more deeply involved in part two, not only reprising his role but also co-writing the film.

The Creed movies build on a story beloved by fans for decades. The tale of Rocky Balboa, a scrappy working-class fighter from Philadelphia, is iconic, while the subsequent sequels are less and less so. But Rocky's relationships, especially his rivalry-turned-friendship with fellow fighter Apollo Creed, are perhaps why the Rocky movies became so successful.

That bond laid the foundation for the Creed movies, where Stallone's Rocky character becomes a mentor to Apollo's son Adonis, played by Jordan.

Creed II builds on a great tragedy in Adonis' life, the fight in Rocky IV that took his father's life. But it also follows the evolution of Adonis both as a fighter and as a man, exploring his relationships with Rocky and with his love interest, a musician named Bianca played by another rising talent, Tessa Thompson.

The Creed movies aren't the first sequels or reboots to win with critics and audiences — Mad Max Fury Road and some of the latest Star Wars movies come to mind. But with everything from Mary Poppins (also featuring one of its original stars, Dick Van Dyke) to Dumbo in the reboot pipeline, it seems time to take a closer look at why some reboots shine and others fizzle.

So this week on the Pop Panel, we'll do just that.

And while I know it may be too early for some of you, Christmas TV movie season is also upon us. You know the movies I mean, with the interchangeable and homogenous casts, the cliche-laden storylines and guaranteed happy endings. This year there will be more of them than ever. We ask why they remain so unchanging.

[What's your go-to Christmas movie? This one is mine.]

Ian Hanomansing is hosting the Pop Panel tonight. Joining him in The National's studio are Donnovan Bennett, host and writer at Sportsnet, as well as freelance writer Stephen Marche, and Ishani Nath, senior editor at Flare.com. I hope you'll join us!

Reporter Briar Stewart has been covering the aftermath of the fires in Paradise, Calif., and the search for the missing.

As we drove around the streets and cul de sacs of Paradise, Calif., it was terrifying to think about what it must have been like as fire roared through the community.

A search-and-rescue volunteer remarked to me that it was like a nuclear bomb had gone off in the city.

Online and on message boards set up at evacuation centres there were desperate pleas from relatives looking for loved ones.

So many of those still missing are in their 80s and 90s, some described as having dementia or a disability. It's difficult to imagine what it must have been like for them — those  who didn't recognize the danger, or who were unable to leave on their own and were trapped.

The aftermath of the fire is bleak and depressing, and hundreds are still unaccounted for.

The properties where the missing lived are the priority for the search teams. As they pick through the rubble they are looking for bone fragments, knowing that in some cases even those may have been incinerated.

As the search continues, residents are also demanding answers from officials.

This town had been threatened by wildfires before, and people had even gone through mock evacuations to prepare for the worst.

So the residents of Paradise are asking why, when the worst happened, was there such little warning. Why weren't evacuation orders put in place earlier. And when they finally did get issued, why weren't they communicated to many of the residents.

Watch the report on the California fires and the search for the missing from The National: 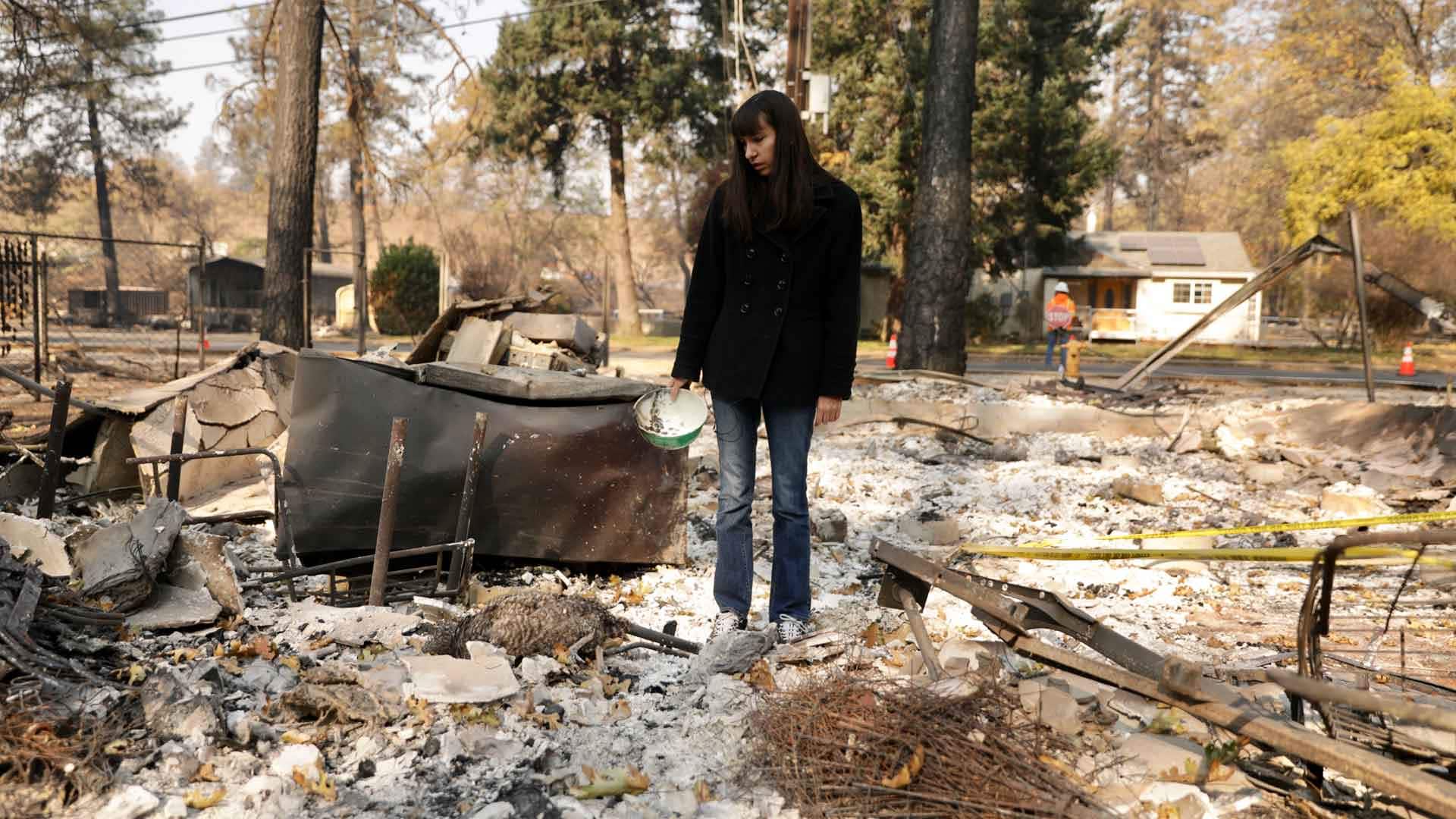 The ruins of Paradise: Inside the California fire zone | Dispatch

2 years agoVideo
9:45
Nearly two weeks after California's deadliest wildfire began, more than 500 people are still unaccounted for and more than 80 have been confirmed dead so far — a number that has been rising almost daily. CBC's Briar Stewart takes us to the devastated town of Paradise, where people are bracing for rains that could bring a new danger to the region. 9:45

The search for an elusive otter with a penchant for koi.

"We hope to receive your forgiveness for our cultural misunderstandings."

- Domenico Dolce, co-founder of the D&G fashion brand, apologizing for a new online ad that has drawn accusations of racism for its depiction of a Chinese woman struggling to eat pasta and pizza with chopsticks.

The world's largest moose was built for size, not portability. Then 20 years later, the City of Moose Jaw constructed a new visitor information centre a kilometre down the Trans Canada from the old one, and Mac the Moose had to move as well. As this report indicates, it wasn't an easy task — the 10 metre high ungulate weighed 9,000 kilograms and was falling apart. "If there's any wind at all he's likely to blow over, and then I guess we'd have the biggest roadkill in Canada," explains Wayne Gamble of Tourism Moose Jaw.

16 years agoVideo
1:51
A familiar figure in Moose Jaw, Sask. is due to move but transplanting him will be tough. 1:51