A closer look at the day's most notable stories with The National's Jonathon Gatehouse: risk of global financial collapse growing, IMF report says; new allegations, turmoil around Brett Kavanaugh; much of world's honey is anything but pure, according to a new study

The booming global economy is at risk of another financial collapse, the International Monetary Fund warned today, as the good times persuade countries to pile up debt and lull regulators into complacency.

"No financial regulatory framework can or should aim to reduce the probability of crisis to zero, so regulators should remain humble," the organization says in its annual Global Financial Stability report released this morning.

"Risks tend to rise during good times, such as the current period of low interest rates and subdued volatility, and those risks can always migrate to new areas."

The report, which looks back over the decade that has passed since the start of the subprime mortgage crisis, says that much progress has been made.

But it highlights several areas of concern, including the growth of digital currencies, the rise of unregulated "shadow" lenders in places like China and India, and "regulatory fatigue" when it comes to cracking down on insurance companies and investment firms.

The IMF's biggest worry is the increasing indebtedness of governments, especially in the developing world, putting their economies at risk as interest rates begin to rise.

The median government debt-GDP ratio now stands at 52 per cent, up from the pre-2008 crisis mark of 36 per cent, and a decade of global efforts to keep the economy afloat has left central banks more vulnerable than before.

She added her own note of caution about the months ahead: "If the current trade disputes were to escalate further, they could deliver a shock to a broader range of emerging and developing economies."

However, the growing public and private debt, which now total $182 trillion US — 60 per cent higher than in 2008 — remains her preoccupation as well.

Recent currency crises in Turkey and Argentina should be enough to remind everyone what happens when market confidence is lost.

"This should serve as a wake-up call," Lagarde said.

The FBI investigation into Brett Kavanaugh is either finished or expanding by the minute, depending whom you believe.

Yesterday, U.S. Senate Majority Leader Mitch McConnell and a Trump administration official both indicated that the supplemental background check — ordered by the president in the wake of Christine Blasey Ford's allegations that the Supreme Court nominee tried to rape her at a house party 36 years ago — was all but completed, and could be in their hands as early as today.

But this morning, CNN reports that the FBI is expanding the scope of its probe. It says investigators are seeking to interview more people who attended the party on July 1, 1982, as well as looking into allegations from another woman that Kavanaugh exposed himself to her during a drunken Yale university party a couple of years later.

All of which is happening as yet another allegation of misconduct has surfaced, via the Trump-baiting, Stormy-Daniels-representing lawyer Michael Avenatti.

This morning, he tweeted out a "sworn statement" from an unidentified woman who says she "witnessed firsthand" multiple incidents where Kavanaugh spiked girls' drinks during high school parties with "Quaaludes and/or grain alcohol" in efforts make the young women "more likely to engage in sexual acts."

The new claims are similar to allegations made by another Avenatti client, Julie Swetnick, first revealed during last week's Senate hearings and expanded upon in subsequent interviews.

The FBI report will be delivered to the White House and then shared with senators, but as of now there are no plans to make its findings public.

McConnell, the Republican leader, has indicated that a full Senate vote on Kavanaugh's confirmation could come as early as tomorrow or Friday. But Democrats are asking for at least 24 hours to digest the report before the roll-call.

Regardless, the FBI seems unlikely to put the allegations to rest. Under Trump's orders, its report must be produced within a maximum one-week time frame. And indications are that several key figures, including Blasey Ford and Deborah Ramirez, the woman who made the Yale allegation, had yet to be interviewed as of this morning.

What is clear is that the president has already made up his mind.

Last night at a rally in Mississippi he mocked Blasey Ford's testimony before the Senate Judiciary Committee, imitating her performance and suggesting she wasn't credible.

None of which will ease other concerns that have been raised by the way Kavanaugh has tried to defend himself against the allegations.

Today, two open letters signed by hundreds of U.S. law professors will be delivered to the Senate, underlining their worries about the judge's fitness for the highest court in the land.

Both letters take issue with Kavanaugh's angry testimony last week, in which he accused Democrats of carrying out a "calculated and orchestrated political hit" in an act of revenge for the Clintons. (As a young lawyer during the mid-1990s, Kavanaugh was an enthusiastic member of independent counsel Ken Starr's probe into the Whitewater and Monica Lewinsky scandals.)

The law professors, including several from Colombia, Harvard and Kavanaugh's alma mater Yale, say that the judge's outburst demonstrated a political bias and throws his independence into question.

He "did not display the impartiality and judicial temperament requisite to sit on the highest court of our land," says one letter.

"Judge Kavanaugh's remarks suggest he would not give fair consideration to cases that he perceived to be brought by left-leaning organisations that he has already denigrated," reads the other.

Honey is anything but pure, according to a new scientific study.

A team of researchers from Macquarie University in Australia tested 100 samples of globally sourced honey and discovered that more than a quarter of them were "fake" — adulterated with cheap sugars and syrups.

The paper, published yesterday in the journal Scientific Reports, found that 52 per cent of Asian honey samples had been mixed with other substances, but the problem also extended to Europe (28 per cent) and Australia (18 per cent.)

New Zealand has a particular problem, the study notes, with all the tested samples of manuka honey proving to be adulterated. Not a huge surprise, given that the country produces just 1,700 tons of it annually, yet as much as 10,000 tons of "manuka" is sold each year.

Seven North American samples, including two from Canada, were tested and all passed.

Food fraud is estimated to be a $40 billion US a year business, and honey is thought to be the third-most adulterated product, behind milk and olive oil.

But the study suggests that the problem might be bigger than previously thought.

Tests on more than 2,200 honey samples by the Europe Union recently found that 14 per cent — or one in every seven jars — were fake, adulterated with sweeteners like sugar, molasses and potato syrup. A further 20 per cent made false claims about the origin of the honey, blending together products from various regions and countries.

Honey purity has become an issue Down Under, following an investigation by the Australian Broadcast Company and Fairfax Media that revealed many of the country's largest supermarkets and producers are selling adulterated bee products falsely branded as being 100 per cent pure.

China, which saw its honey production rise 88 per cent between 2000 and 2014 — even as its bee population was under stress from pesticides, loss of habitat and pollution — is thought to be the source of much of the fake stuff.

And popular e-commerce sites like Alibaba are filled with ads for cheap rice syrup and other sweeteners, claiming they can't be detected by official honey tests.

By some estimates, up to 99 per cent of honey sold in China is adulterated, some of it being as much as 50 per cent added fructose.

In Canada, where the value of domestically produced honey dropped by nearly $53 million between 2015 and 2016, producers have been sounding the alarm about fake imports. They accuse the food industry of exacerbating the problem by buying up the fake honey at cut-rate prices for use in products like granola bars and cereals.

The Canadian Food Inspection Agency says honey has been a "sampling priority" for two decades, and that the isotope ratio technique it uses to test for purity meets international standards.

"I see that some of your colleagues are pushing the theory that Mr. Skripal was almost some kind of human rights activist. He was simply a spy. A traitor to the motherland … He's simply a scumbag, that's all."

Canada's best known bank robber, Edwin Boyd, is back on the streets of Toronto after 10 years in the Kingston Pen. He tells the CBC News that he has changed while inside, having found God and straightened out his crooked ways (after a couple of failed escape attempts.) But within a few months of this interview, he's back in jail, charged with violating his parole by moving without telling his supervisor, and raising concern over his questionable relationship with a 16-year-old girl. 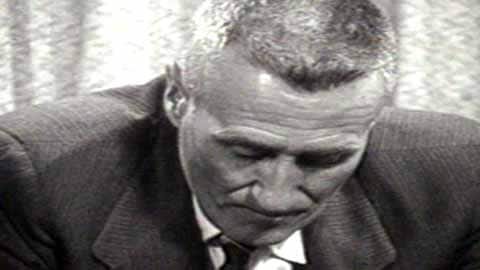