A closer look at the day's most notable stories with The National's Jonathon Gatehouse: news from UN report on biodiversity and global ecosystem is exceptionally bad; despite a promise of action from the feds, Canada is a long way from solving its issues with both legal and illegal firearms.

The top-line news — that one million species are at risk of extinction due to human activity — is exceptionally bad.

But the summary report of the UN's Intergovernmental Science-Policy Platform on Biodiversity and Ecosystem Services (IPBES) released this morning in Paris, is filled with many more alarming findings.

Human actions have already "significantly altered" three-quarters of the world's land environments and 66 per cent of the marine ones, while the planet's urban areas have more than doubled in size since 1992.

Almost 75 per cent of our fresh water is now devoted to raising crops or livestock.

Plastic pollution has increased tenfold since 1980.

The oceans are becoming fished out, with a third of stocks being harvested at "unsustainable levels," and 60 per cent at maximum catches.

And $577 billion US a year in crops are now at risk due to pollinator loss.

Yet the comprehensive report, which drew upon 15,000 scientific and government sources, shouldn't come as a shock.

It was only seven weeks ago that a different UN report, the Global Environment Outlook, warned that the combined effects of population growth, pollution, climate change, and habitat destruction are putting human health at risk, now accounting for a quarter of all premature deaths and diseases around the world.

Which came on the heels of a February study that predicted the extinction of 40 per cent of all insect species within the next few decades, due mostly to agriculture and urbanization and the attendant pollution.

The year kicked off with a journal report that found that the world's oceans are, on average, heating up 40 per cent faster than previously estimated, with temperature records now being broken on an annual basis. Which is particularly troubling, since they have been pretty much the only thing slowing climate change on land. Not to mention that hotter oceans will fuel larger and more devastating storms and floods.

The world's glaciers, meanwhile, have lost nine trillion metric tonnes of ice since 1961, an average of 335 billion tonnes a year.

All of which has been disclosed since the UN Intergovernmental Panel on Climate Change (IPCC) released a terrifying report last October, saying that the world has only 12 years left to limit warming to 1.5 C, or face potentially catastrophic droughts, climate disasters and food shortages.

And a warning came that same month from the World Wildlife Fund that the world's animal population has already declined by 60 per cent since 1970, due again mostly to human activity. A drop-off that only seems set to accelerate, as the quarter of the planet that remains untouched by man will shrink to a tenth by 2050.

The calls to environmental action date back much further.

It's been almost two full decades since the IPCC warned of the potential for a 6 C global average warming by the end of the 21st century. And just short of 35 years since the first major international conference sounded the alarm on the greenhouse gas effect.

How are we coping given all that advance warning? In a word, poorly, according to the experts.

Three-plus years after the landmark Paris Accord on fighting climate change, few of the 175 parties are on track to meet their agreed-upon targets — which, if hit, would only limit warming to around 3 C.

Canada's greenhouse gas reduction plans, for example, have been rated as "insufficient," bordering on "highly insufficient,"  given the strong provincial opposition to carbon pricing, and what appears to be flagging ambition.

The bright spot, such as it is, might be that all the dire warnings do seem to be increasing global awareness of the problems.

A recent 26 nation survey found that residents of the 13 countries, including Canada, Australia, the U.K. and Brazil, now rank climate change as the biggest threat to their homelands. Eight other countries, including Russia, Nigeria, France and the Philippines, said it was ISIS, while four, led by the United States, said cyberattacks.

But if you delve into the data, the worry is mostly on one side of the political divide, with supporters of the Liberals, NDP and Greens registering greater than 80 per cent concern, and just 46 per cent of Conservative voters citing climate change as a top-of-mind preoccupation.

An indication, perhaps, that not everyone is getting the same news.

This country is a long way from solving its issues with both legal and illegal firearms, reporter Terence McKenna writes.

In the last federal election, Justin Trudeau's Liberals made a bold promise: "We will take action to get handguns and assault weapons off our streets."

That was followed with a mandate letter to Border Security and Organized Crime Reduction Minister Bill Blair asking him to examine the possibility of a handgun and assault weapons ban … something requested by the mayors of Montreal, Toronto and other Canadian cities.

Now the Liberals seem to be backing away from that promise, faced with a rural backlash of the sort that greeted the Chretien government's defunct long-gun registry.

Tonight on The National we begin a series that provides a close-up look at the arguments on both sides of the gun-control debate.

On the pro-gun side we will meet a gun-store owner and a long-time Conservative MP who entered politics to fight against gun legislation.

On the other side, we will hear from a trauma surgeon in Toronto and a survivor of the Montreal Polytechnique massacre who has devoted her life's work to fighting for gun control.

Later in the series, we will examine how illegal guns are smuggled into Canada.

And we'll visit police and community activists who are struggling to contain the gun violence in downtown Toronto.

In a matter of weeks after the Christchurch massacre where 50 Muslim worshippers were slaughtered, the Jacinda Ardern government in New Zealand passed a law banning most semi-automatic weapons in that country. This series will give you an idea why we are very far from doing anything like that in Canada.

WATCH: The first in The National's series on guns in Canada tonight on CBC Television and streamed online

"I hope when I rejoin my family and friends that the country will be in a place without xenophobia, injustice and lies at the helm of our country. There still remains much to be told. And I look forward to the day that I can share the truth."

- Michael Cohen, Donald Trump's former personal lawyer, delivers a shot at the U.S. president as he prepares to begin a three-year prison sentence for facilitating hush payments and lying to Congress.

As Manitoba began to prepare to celebrate 100 years as a province, a group of notable citizens pushed for official recognition of the man who paved the way for Confederation. But there was some resistance to erecting a statue of Louis Riel on the wide lawn outside the legislature. It did eventually happen, but that was only the beginning of the controversy. 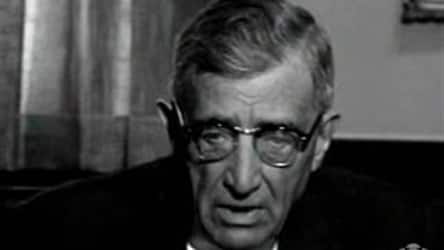 Time for a Riel statue in Winnipeg?

2 years ago
1:40
The new Louis Riel Society calls for a statue of Riel at the provincial legislature. 1:40