Welcome to The National Today newsletter, which takes a closer look at some of the day's most notable stories. Sign up here and we'll deliver it directly to your inbox Monday to Friday.

The world's summer of hell

It has a been a summer of extremes.

Much of the northern hemisphere continues to swelter under unusually hot temperatures, even by the standards of mid-July.

Japan, which has been struggling with a deadly heat wave for more than two weeks, hit a new all-time record of 41.1 C earlier this week — about 12 degrees above the normal July high.

In the U.S. southwest, where a "heat dome" has dropped over several states, the National Weather service also recorded a new maximum temperature yesterday when the mercury touched 52.7 C in Death Valley, Calif., shattering a record that had stood for 102 years.

This follows a high of 51.3 C in Ouargla, Algeria, earlier this month, claimed to be the highest temperature ever recorded in Africa.

Records have also been set in the northernmost reaches of Scandinavia this month, with temperatures regularly surpassing 30 C. It's been the hottest July in 260 years in Sweden, and Finland's highs this month have been 12 degrees above the norm, contributing to forest-fire problems in both countries.

The United Kingdom is also sweating through an unusually hot summer, with a forecast high of 34 C tomorrow, and predictions that Friday might break the all-time record of 38.5 C. It explains why the waters of Bracklesham Bay in West Sussex are now warmer than those at Zuma Beach in Malibu, Calif.

All of which follows on the heels of 2015, 2016 and 2017 being the three hottest years on record, according to the United Nations World Meteorological Organisation. Last year also had the dubious distinction of being the most costly year on record for severe weather and climate events, as the world suffered through droughts, wildfires, floods and hurricanes.

A new study, released this week, finds that human-related global warming is now accelerating the changes in our weather, causing summer temperatures to spike more quickly than in the past. Climate change is also causing arctic spiders to grow larger, while other researchers are pointing to a link between higher temperatures and increased suicide rates in the U.S. and Mexico.

Meanwhile, wheat and cotton prices are surging, as extended droughts in Russia and Texas threaten those respective crops.

And there are still nine more weeks of summer.

China sticking it to Big Pharma

A burgeoning scandal over unsafe and ineffective vaccines has Chinese leaders vowing to crack down on the country's pharmaceutical industry.

Late last week, health authorities revealed that one of the country's biggest drug makers, Changsheng Bio-tech, had been selling a substandard version of the DPT vaccine used to inoculate children against diphtheria, whooping cough and tetanus. It has since emerged that the same company had been found to be forging data about another vaccine used to protect infants from rabies.

It's not clear how many children were given the ineffective vaccines, but the estimates range from hundreds of thousands to millions. And while there have been no reports of illness, the Chinese public has been expressing outrage about the scandal on social media, with the Mandarin word for vaccine appearing 321 million times on posts and searches on WeChat on Friday alone.

The country's leaders have taken notice.

Over the weekend, Chinese Premier Li Keqiang said that the company had crossed the "moral bottom line" and ordered a full probe into the standard and oversight of all vaccine production.

On Monday, President Xi Jinping called the scandal "hideous and appalling," pledging to clean up the industry and make public the findings of the government investigation.

Yesterday, Chinese state media reported that the chairwoman of Changsheng Bio-tech has been placed in "criminal detention," along with 14 other company executives and employees.

It's not the first time that the quality and safety of Chinese inoculations have been called into question. In March 2016, authorities busted a network of 300 people involved in the trafficking of expired and improperly stored vaccines to hospitals and disease control centres in at least 24 cities and provinces. The illicit trade had been going on for years, and had netted more than $110 million Cdn.

China, the world's second-largest health care market after the United States, is also the fastest-growing market for pharmaceuticals, with revenues predicted to reach as much as US $175 billion by 2022.

The industry's unchecked growth is a big part of Xi's "Made in China 2025" plan to create the world's most advanced and innovative economy.

​Donald Trump's administration is preparing to spend up to $12 billion US to bail out American farmers who have been directly hurt by the president's global trade wars.

The White House plan, announced yesterday, will see pork, corn, dairy, wheat, cotton and soybean farmers receive compensation payments for slumping prices and sales due to retaliatory tariffs enacted by China, Canada, Mexico and the European Union. There will also be more government money for food banks and community nutrition programs targeted to buying up surplus production, as well as investments in the development of new markets.

"This is a short-term solution that will give President Trump and his administration the time to work on long-term trade deals," Sonny Perdue, the U.S. Agriculture Secretary, told reporters.

Farmers are already feeling the backlash from foreign nations upset over Trump's tariffs on steel, aluminum and, in the case of China, a wide variety of manufactured goods from aircraft tires to LEDs and nuclear reactors.

Pork prices, for example, have fallen sharply as Mexico and China — the two biggest foreign markets for U.S. producers — slapped on their own duties. Forecasts suggest a much steeper tumble still to come.

And warehouses around the U.S. are now crammed with surplus meat and cheese.

The national cheese stockpile currently stands at 1.39 billion pounds, an all-time high. (Although that has a lot to do with the season, the changing diet of Americans and increased milk production.) The worry, however, is that it will grow even larger, as the trade wars further depress prices. As it is, there are already 4.6 pounds stored away for each and every citizen.

The meat surplus is even larger, with 2.5 billion pounds of beef, pork, chicken and turkey in cold storage — another record.

The U.S. government already spends more than $800 million a year buying food for the military, public schools and anti-poverty programs, so it's not clear how much more room there is in the federal pantry.

American pork farmers are now pinning their hopes on a report suggesting that Mexico's new president, Andrés Manuel López Obrador, might be open to concluding a bilateral free-trade deal with Trump, cutting Canada out of the NAFTA process.

"We don't want payments," Dave Warner, the spokesman for the National Pork Producers Council, said yesterday. "What we really want is the trade disputes to end, and then the tariffs will go away."

"In some ways, we didn't want to think it was water … but really, there's no other explanation."

- Italian scientist Elena Pettinelli, the co-author of a new study that claims to have detected a 20 square-kilometre lake of liquid water beneath the south pole of Mars.

Campaign debates are usually pretty staid affairs, full of talking points, canned responses and would-be zingers that die as they exit the marble mouths of politicians. The 1984 federal election tangle was an exception. Progressive Conservative leader Brian Mulroney pressed Prime Minister John Turner on a series of patronage appointments that Pierre Trudeau had made on his way out the door. "I had no option," Turner protests. Mulroney pounces. "You had an option, sir, to say 'No' and you chose to say 'Yes' to the old attitudes and the old stories of the Liberal party… You had an option. You could have done better." 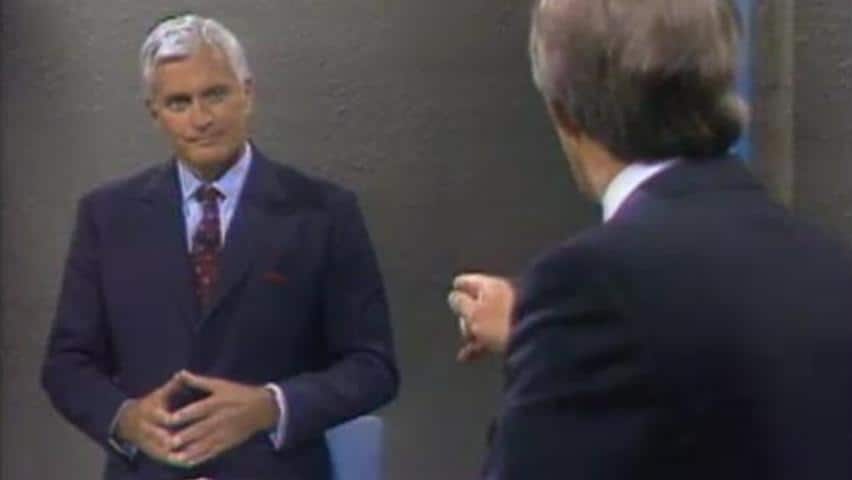 36 years ago
3:58
Brian Mulroney and John Turner cross swords in a pivotal debate during the 1984 election campaign. 3:58