A closer look at the day's most notable stories with The National's Jonathon Gatehouse: brewers are getting more adventurous with their products and marketing; Ziauddin Yousafzai's daughter is so famous she's known by just her first name, and he's fine being known simply as 'Malala's dad.'

The Toronto Raptors' spring-long run to an NBA Championship has been a boon to restaurants, bars and beverage sellers across Canada.

Earlier in the playoffs, credit and debit card transactions were spiking by 80 to 90 per cent during and after the games, and not just in Toronto, but in Halifax, Calgary and Vancouver too.

The party will continue for a couple more days, with a parade and civic celebration at Toronto City Hall on Monday.

But the hangover is coming — at least for beer makers.

However, while wine sales grew 4.6 per cent last year, increasing in every province and territory, and liquor sales were up 4.4 per cent, beer was basically flat, growing less than a per cent and cementing a decade-long trend.

And even as the craft beer craze saw the number of breweries in Canada hit an all-time high in 2018, overall production fell by 3.4 per cent.

This is part of a global shift.

As with so many things, young people are being blamed.

Millennials — who apparently care about fitness and dislike arriving at work all bleary-eyed and pasty-mouthed — drink far less than older generations. And Gen Z, the cohort just now coming of legal age, consumes 20 per cent less booze than the 30-somethings.

This change has spurred some desperate measures among brewers.

Big global beverage makers like AB InBev have been pushing low-calorie beers and shrinking the size of bottles. And in Germany, some brewers are giving up on the alcohol altogether, with almost 500 brands of non-alcoholic beer now on the market.

Technology is also being marshalled for the fight. Researchers in Indiana have developed an induction heating system to allow for faster and more controlled beer pasteurization, promising improved taste, quality and shelf life.

And Miller Lite has just unveiled a limited-edition "Cantroller" — a 10-button video game remote built into a full beer can.

Promotional gimmicks are on the rise. A brewery in Tokyo has started offering monthly subscriptions that allow beer drinkers to try a glass of draft each day at a specified bar. And beer yoga is now a big thing, combining stretch sessions with a pint and some quiet talk about "mindful drinking."

Of course, not all brewers are hurting.

The lust for hard-to-get craft beers is fueling resale websites where rare bottles are being scalped for hundreds, and sometimes thousands, of dollars.

Any flavour of beer you have ever thought of — and many you never wanted — is now available, from peanut butter to bull testicles (a product that started out as an April Fool's joke and, finding willing customers, became real).

Yesterday, the U.K. branch of cereal-maker Kellogg's announced that it has teamed up with a brewery to turn rejected Rice Krispies and Coco Pops into a pale ale and a stout. An American craft brewer already makes a marshmallow-flavoured beer that is clearly meant to evoke a bowl full of Lucky Charms, complete with a "It's Magically Ridiculous" tagline.

Meanwhile, traditional beers and beer-drinking are already being relegated to history.

The city of Oxford, U.K., is considering a proposal to erect a blue plaque in an alleyway near the pub where Bob Hawke, the late former Australian prime minister, set a world record in 1954 by skolling a yard of ale — the equivalent of 1.4 litres — in just 11 seconds when he was a Rhodes scholar.

The feat was immortalized in the Guinness Book of Records, and is said to have happened in the same bar where Bill Clinton failed to inhale a joint when he was a Rhodes scholar.

Ziauddin Yousafzai's daughter is so famous she's known by just her first name: Malala. And he is just fine with being known simply as Malala's dad.

While he is not as well known as Malala, theirs is a dynamic and passionate partnership in the quest for women's rights and education.

Ziauddin was born in the Swat Valley in 1969, into a traditional Pashtun family.

He was the younger of two sons, and had five sisters.

Early on in life he says he began to see the difference in the way he and his sisters were treated. Ziauddin, his father and brother were fed better and had newer clothes, while his mother and sisters had to make do with leftovers and hand-me-downs.

"I come from a land where women have served me all my life. I come from a family where my gender made me special," Ziauddin says in his 2018 memoir Let Her Fly. "I did not want to be special for this reason."

His determination to unlearn the habits of the patriarchal culture into which he was born took root after watching a cousin struggle in an abusive forced marriage. Ziauddin says he was determined that own marriage and family would be different.

Malala's birth in 1997 was the moment Ziauddin says he knew he had a chance to shape a girl unshackled by cultural expectations.

"I believed that she could do anything in the world, this beautiful child … I had faith in her and that was enough."

When the Taliban took over the Swat Valley in Pakistan and attacked girls education, Malala didn't stop going to school. Her courage was bolstered by the encouragement of her father.

People at home and abroad began to take notice of the determined, eloquent girl and her fiercely proud father, showcased in this 2009 New York Times documentary.

The Taliban's efforts to silence the teenage activist failed, even after the October 2012 attempt to assassinate her. Her growing profile at home and abroad only increased.

After the attack on Malala, the whole family moved to Birmingham, England. Malala received treatment and rehab for gunshot injuries she suffered in the attempt on her life, while Ziauddin worked as an education attache in the Pakistani Consulate.

His wife and two sons had to make sense of their new world, and it wasn't always easy.

Ziauddin offers his insights into what it's like to be the father to someone the world has embraced, as well as to her siblings, in an interview with The National co-host Adrienne Arsenault. Watch it Sunday, Father's Day.

"A teacher usually does look over it to double check, but unfortunately not this year."

- Heather Nicholson, a Grade 12 student at John McCrae Secondary School in Ottawa, on the hasty recall of 420 yearbooks after it was discovered that some pages referenced male genitalia and gangs.

This 2003 recounting of Hillary Clinton's life before and during her husband's presidency was actually her fourth book, after the best-selling It Takes a Village, a White House history, and a collection of children's letters to the First Pets. But it netted her an $8 million US advance, and built momentum towards her 2008 campaign for the Democratic Party nomination. There have been three books since. Two more political memoirs to advertise her 2016 ambitions, and What Happened, her 2017 effort to explain how it all went wrong. 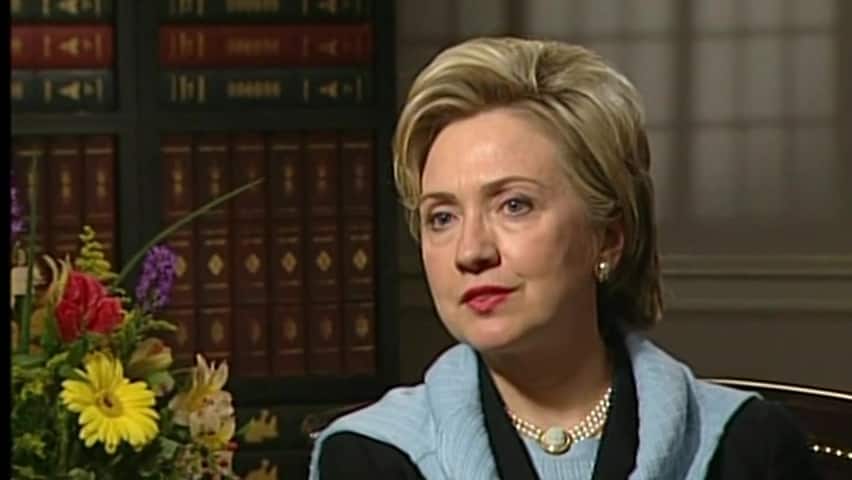