A farewell to Saudi arms?

Germany has joined the growing list of countries that are rethinking weapons sales to Saudi Arabia over concerns about the killing of Jamal Khashoggi and the ongoing war in Yemen.

Angela Merkel, the German chancellor, suggested yesterday that future arms exports will be put on hold until there is full transparency about who sanctioned the killing of the dissident journalist inside Saudi Arabia's Istanbul consulate earlier this month.

"I agree with all those who say that the, albeit already limited, arms exports can't take place in the current circumstances," Merkel told reporters.

But what that actually means is harder to say.

The coalition deal that allows Merkel to govern already prohibits direct weapons transfers to any country involved in the almost four-year-long conflict in Yemen. Yet, Germany remains the fourth-largest supplier of arms to Saudi Arabia, behind the United States, Britain and France, thanks to grandfathered deals and "end use" loopholes. Multinational arms makers like Eurofighter have also be exempted from the ban, while some German firms have simply set up manufacturing subsidiaries inside the fundamentalist kingdom.

Last month, the Spanish government cancelled a deal that would seen 400 laser-guided bombs delivered to Riyadh, over concerns that they would be used against civilians in Yemen. It refunded a $10.7 million US deposit.

There are also court challenges being mounted against British and French arms exports to the kingdom.

And both Norway and Finland have blocked arms sales to the United Arab Emirates — part of the Saudi coalition taking on the Iranian-backed Houthi rebels.

The reality, however, is that the Saudis — the world's third-largest military spenders with a $69.5 billion US defence budget — are having little trouble finding people to take their money.

The Stockholm International Peace Research Institute, a think-tank that tracks global arms sales, ranked the Saudis as the world's No. 1 arms importers in 2017, after placing second behind India in 2016. And its detailed breakdowns show deals with everyone from Bulgaria (15 second-hand armoured personnel carriers) to Switzerland (55 trainer aircraft) to Turkey (a $350 million US deal to rebuild 350 armoured vehicles.)

Canada, of course, has its own arms deal with the Saudis, a 15-year, $15 billion Cdn agreement that will see London, Ont.-based General Dynamics Land Systems Canada eventually supply around 740 light armoured vehicles.

Just how many have actually been shipped since the contract was signed in 2014 is a closely guarded secret, but the federal government has repeatedly said that it intends to honour the terms of the contract.

But given recent developments, NDP Leader Jagmeet Singh is urging the Liberals to cancel the sale. And last night, during an appearance on Radio Canada's Tout Le Monde En Parle talk show, Prime Minister Justin Trudeau sounded a little less certain about the future of the agreement.

"In this contract, there are clauses that must be followed in relation to the use of what is sold to them," the prime minister said, making reference to stipulations that the vehicles can't be used in operations against civilian populations. "If they do not follow these clauses, we will definitely cancel the contract."

For the time being, however, it is business as usual.

Much the same approach as Donald Trump, who continues to say that the Saudis are too big an arms customer to turn away.

The American president's numbers are suspect — no one is quite sure where his oft-referenced $110 billion US in weapons deals is coming from, given that the Saudis have negotiated- or pending-agreements to buy only $19 billion.

But Saudi Arabia remains the No. 1 foreign buyer for American weapons, and U.S. defence contractors are lobbying hard to keep it that way.

Even if the true price of such sales can be counted in Yemen's mounting civilian death toll.

On a trip deep into the Yukon's St. Elias icefields with a scientific team, reporter Susan Ormiston learned some worrisome things about Canada's largest alpine glaciers.

Our story on Canada's glaciers and the warming climate falls into the category of amazing facts you likely don't know about Canadian ice:

"Glaciers are fantastic barometers of climate change," glaciologist Gwenn Flowers told us, traversing one of Yukon's great glaciers — the Kaskawulsh — a massive highway of ice which stretches 70 kilometres long and 5 km wide.

"They average out the signals over time, so they tell us what's happening on a long time scale."

And what they're telling us is not pretty.

Think of the sweltering heat this summer in many parts of the world, including Yukon, which had extreme heat warnings in July.

Average temperatures have risen two degrees Celsius in the past 50 years in the Yukon, which translates into glacial thinning and retreat. At a worrisome rate.

The melt from Yukon and Alaska glaciers in this region contributed 20 per cent of observed sea-level rise from glacier and ice caps (outside of Greenland/Antarctica) from 2003-2009, according to Flowers.

We travelled deep into the icefields with Gwenn Flowers and her scientific team by helicopter, dropping down onto these magnificent ancient glaciers to observe the markers of climate change.

Flowers and other scientists are imploring Canadians to pay attention to these sentinels of change.

"Given our responsibility to be stewards of this ice, I think we should be doing better. I think understanding our terrestrial and marine ice should be a national priority." 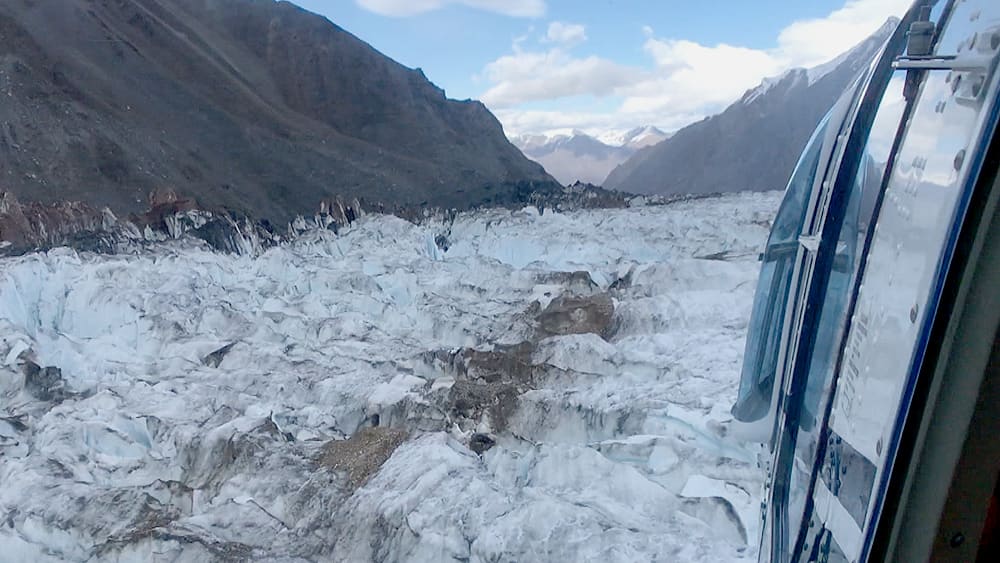 2 years ago
0:31
A CBC News crew hitches a ride on a helicopter doing a low-altitude flight over a 'surging glacier' in the Yukon's St. Elias mountains. 0:31

Horrors of the 'dead shed'

The illegal international trade in wildlife is increasing despite the efforts of teams like the U.K. Border Force, writes London bureau reporter Margaret Evans.

So what's the connection between a cute bear cub named Kyra chewing on the end of a tree at the Chester Zoo just outside Liverpool, and a grim room known as the "Dead Shed" at London's Heathrow Airport?

Well, bear bile for one thing.

It can be found in small vials confiscated by U.K. Border Force Agents at Heathrow airport, who are working to interrupt the trade in illegal wildlife.

Evidence of the disturbing trade was just one of many on display at the Dead Shed when we got a tour of the room used to train customs agents in what to look for.

Sun bears native to South East Asia are among those often captured and then farmed in inhumane conditions for their bile. It is a digestive fluid stored in the gallbladder. Traders "tap" it, selling it to traditional medicine practitioners who claim it has special properties.

Sun bears, the world's smallest and made distinctive by the golden disc on their chests, are offered protection under CITES, the Convention on International Trade in Endangered Species of Wild Fauna and Flora.

But CITES protection for sun bears and other animals hasn't stopped the illegal international trade in wildlife. In fact, it's growing. The number of seizures by the U.K. Border Force in 2017 was more than 1,300 — up from just 174 in 2011.

It's now the fourth-most lucrative in the world for criminal gangs, after drugs, weapons and people smuggling, worth as much as $23 billion US annually. ​ 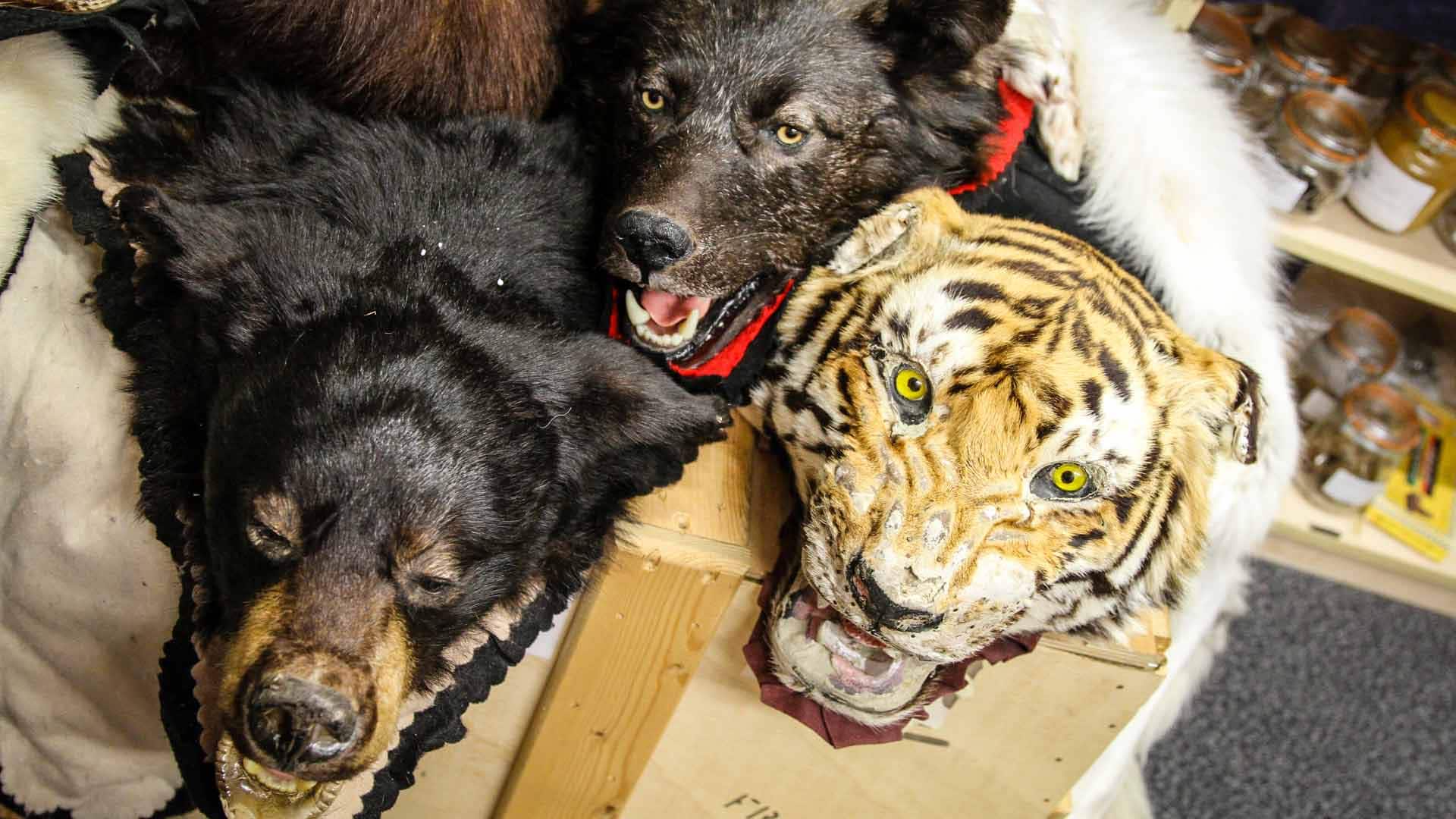 2 years ago
2:27
The illegal wildlife trade is one of the most lucrative forms of organized crime in the world, worth up to $23 billion US a year. 2:27

Finishing a job that ended in tragedy.

"Under no circumstances should we tear up old disarmament agreements. Is it really that hard to understand that rejecting these agreements is, as the people say, not the work of a great mind?"

Pierre Berton and Robertson Davies gang up on American author Rona Jaffe and her Best of Everything vision of young, independent working women in 1950s New York. "Is it square to be good?," asks Berton, taking issue with Jaffe's focus on premarital sex. Davies agrees that she's been "a little rough" on men in her book. But Jaffe explains the challenges that women face from all those "senile delinquents" and "heartless professional bachelors" out there.

2 years ago
10:14
The author of The Best of Everything discusses her book with Pierre Berton and Robertson Davies in 1958. 10:14