The latest on the coronavirus outbreak for May 8

The latest on the coronavirus outbreak from CBC News for Friday, May 8.

Nursing homes, insurance companies and airlines are just some of the targets of legal action already emanating from the COVID-19 pandemic — and legal experts said we should expect a slew of lawsuits to be filed in the coming months. "Any time there is mass harm, lots of people suffering financially, physically, they're looking to hold people accountable, entities accountable," said Jasminka Kalajdzic, an associate law professor at the University of Windsor and director of the Class Action Clinic. "Whether any of these, most of these, cases are going to be successful is a big question."

According to research conducted by the law firm DLA Piper, there were slightly less than 700 COVID-19-related individual legal actions and 176 ‎class actions filed in the U.S. as of April 28. In Canada, a total of 17 COVID-19-related class actions were filed across the country, with many more under investigation as of the same date. There have also ‎been a number of high-profile, non-class-action claims commenced, the law firm said. Because Canadian class-action plaintiff lawyers closely monitor U.S. court filings, the law firm said it anticipates a "host of 'copycat' class proceedings in Canada."

In the U.S., nursing homes — where the virus has been most deadly — are expected to be hit by an onslaught of litigation. Meanwhile, companies including Amazon and Costco, insurance companies, airlines, cruise lines and schools are already facing lawsuits for a myriad of reasons. Experts say Canada may follow a similar path and in a few cases already has. A $50-million class-action lawsuit has been launched against Revera Retirement Living on behalf of the families of COVID-19 victims at the company's long-term care facilities in Ontario and a Regina-based law firm has issued a national class action against indemnity insurers in Canada that are not paying business owners for losses accumulated because of the pandemic.

For many of these cases, defendants will have to prove that their actions were "reasonable" in the circumstances, said Erik Knutsen, a Queen's University law professor and co-author of Canadian Tort Law and The Civil Litigation Process. If it's a case of negligence, like those pertaining to nursing homes or cruise lines, the defence will likely be that none of it was foreseeable, that they couldn't predict or prevent all infections and that they complied with government regulations, Kalajdzic said. But even though places like nursing homes may have met the minimum standards set out by the government, that doesn't mean they met the negligence standard, Knutsen said.

As for insurance companies, Kalajdzic said they will likely employ the force majeure defence, also known as "an act of God," arguing they are not bound to cover the claims of their clients because of an unusual event that could not have been predicted or prevented. And in the U.S., at least, there's already a lot of pressure on governments to pass statutes that immunize various companies against liability, Kalajdzic said. There's precedent, she said: in the wake of 9/11, Congress passed a statute that immunized airlines from any civil liability. "I think industries that are reeling, like airlines, like cruise ships, like [the] service industry, health-care facilities, they're probably going to be looking to the government for protection," she said. 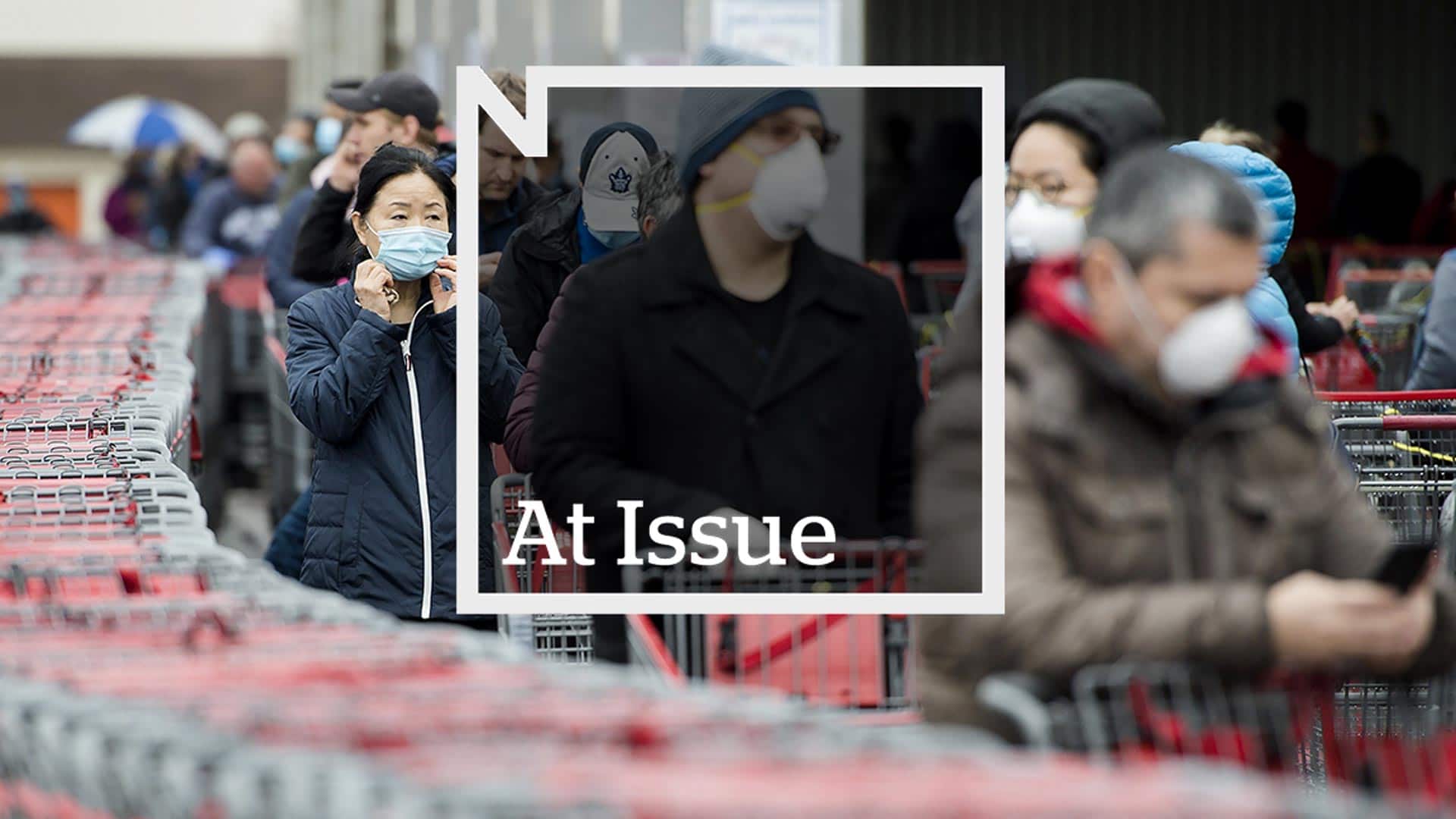 Could COVID-19 change how governments treat essential workers? | At Issue

9 months agoVideo
14:46
The At Issue panel discusses plans for governments to boost wages for essential workers and whether these temporary measures might become permanent. Plus, in this extended edition, the panellists look at the odds of an earlier federal election. 14:46

Canada lost almost two million jobs during the month of April as the impact of COVID-19 on the economy made itself known. Statistics Canada's Labour Force Survey data released today brings the total number of jobs lost during the crisis to more than three million.

The closure of non-essential services to slow the spread of COVID-19 has devastated the economy and forced businesses to shutter temporarily. Statistics Canada said the unemployment rate soared to 13 per cent as the full force of the pandemic hit, compared with 7.8 per cent in March. Economists on average had expected the loss of four million jobs and an unemployment rate of 18 per cent, according to financial markets data firm Refinitiv. Douglas Porter, chief economist with BMO Economics, said those high projections could be tied to reports that more than seven million Canadians had applied for the Canada emergency response benefit (CERB).

Job losses aren't the only way the COVID-19 crisis has impacted employment. In addition to those who are now out of work, the number of people who were employed but worked less than half their usual hours because of the pandemic increased by 2.5 million from February to April. That means the cumulative effect of the economic shutdown — people both no longer employed or working far less — was a staggering 5.5 million as of the week of April 12.

Trudeau says wage subsidy program will be extended past June

The federal government's emergency wage subsidy program is going to be extended beyond June. The program covers 75 per cent of employees' pay, up to $847 per week, to help employers facing plummeting revenues because of pandemic measures keep workers on the payroll for the duration of the COVID-19 crisis.

Prime Minister Justin Trudeau said today he'll offer more details about the extension next week. "We need to make sure that as we move forward to rebuilding and creating a more prosperous Canada in the coming months and years, we think very, very carefully about how important the work that is being done by women and vulnerable Canadians is, and how we need to make sure we're better supporting them," he said. Treasury Board President Jean-Yves Duclos said that as of Thursday, 120,000 ​​​​​​businesses had applied to the program and about 97,000 have been approved, to cover a total of 1.7 million workers.

Canadians can receive the wage subsidy or the CERB, a taxable benefit that offers workers $2,000 every four weeks if they lose their income as a result of the pandemic. Dan Kelly, president of the Canadian Federation of Independent Business, applauded the decision to extend the subsidy. Kelly said he'd like to see more changes to help small businesses stay afloat — such as an expansion of the emergency business account to include small firms that pay dividends or contract wages.

UN Secretary General Antonio Guterres said the COVID-19 pandemic keeps unleashing "a tsunami of hate and xenophobia, scapegoating and scaremongering" and appealed for "an all-out effort to end hate speech globally." His global appeal to address and counter coronavirus-related hate speech follows his April 23 message calling the pandemic "a human crisis that is fast becoming a human rights crisis."

The UN chief said today that "anti-foreigner sentiment has surged online and in the streets, anti-Semitic conspiracy theories have spread and COVID-19-related anti-Muslim attacks have occurred." Guterres added that migrants and refugees "have been vilified as a source of the virus — and then denied access to medical treatment."

"With older persons among the most vulnerable, contemptible memes have emerged suggesting they are also the most expendable," he said. "And journalists, whistleblowers, health professionals, aid workers and human rights defenders are being targeted simply for doing their jobs."

Guterres called on political leaders to show solidarity with all people and on educational institutions to focus on "digital literacy" at a time when "extremists are seeking to prey on captive and potentially despairing audiences." He called on the media, especially social media, to "remove racist, misogynist and other harmful content," on civil society to strengthen outreach to vulnerable people and on religious figures to serve as "models of mutual respect."

"And I ask everyone, everywhere, to stand up against hate, treat each other with dignity and take every opportunity to spread kindness," Guterres said.

Is it safe to give cards and flowers this Mother's Day?

CBC News readers, viewers and listeners have sent in countless questions about the COVID-19 pandemic, including this one. If you have a question of your own, reach out at covid@cbc.ca.

As for the issue at hand: In general, we know the virus is able to persist on different surfaces for varying amounts of time. So, when giving or receiving gifts and packages, Health Canada advises people to continue to maintain proper hygiene to lower any risk of surface transmission. That includes washing hands often with soap and water for at least 20 seconds, using alcohol-based hand sanitizer if soap and water are not available and avoiding touching your face.

Dr. Peter Lin, a family physician and CBC medical expert, echoed this advice and added that mothers can also wipe the surfaces around the flowers for extra caution.

Christina Linton, activity director at the home, said residents cherish trips with their families to Tims, and the COVID-19 pandemic has prevented such outings over the past couple of months. As a pick-me-up, staff at the home went out and bought the necessities, crafted uniforms, printed logos and laminated them, taped a path along the floor, created a service window and basically transformed the dining room to make an authentic-looking experience for residents.

"Just like a little taste of heaven to some. They miss Tims, they miss their families so … putting the two together was a home run for us here," Linton said. "The shock, the disbelief, their jaws dropping, the giggles, the smiles, I mean that's what our job is all about."

And when Tim Hortons learned about the gesture, Lou Taylor, the vice-president of operations for Tim Hortons on P.E.I., said the company is prepared to give the nursing home free food and beverages to keep the event going.

Read the full story about the improvised drive-thru

Send us your questions