Guatemala's Volcano of Fire has killed at least 75 people since it erupted three days ago. The death toll stands in stark contrast to the nearly month-long eruption of the Kilauea volcano in Hawaii, which has also caused massive destruction but has spared human life.

Guatemala's Volcano of Fire has killed at least 75 people since it erupted three days ago. The death toll stands in stark contrast to the nearly month-long eruption of the Kilauea volcano in Hawaii, which has also caused massive destruction but has spared human life.

To understand the deadly contrast requires taking a closer look at these two types of volcanoes.

The Volcano of Fire and Kilauea have different shapes and different magma, which combine to produce very different kinds of eruptions.

Shield volcanoes such as Kilauea are formed from moving lava that eventually hardened. These volcanoes are typically flat and wide, often with a dome structure resembling a shield lying on the ground.

Stratovolcanoes like the Volcano of Fire (Volcan de Fuego), on the other hand, are likely what most people think of when they picture volcanoes. These are towering mountains with pointed peaks. Their eruptions feature vast lava flows down steep slopes.

As a comparison, Kilauea is roughly 1,200 metres tall, while the Volcano of Fire reaches more than 3,700 metres.

The magma of shield volcanoes like Kilauea has lower viscosity, meaning it's runnier.

Volcanologist Einat Lev of Columbia University's Lamont-Doherty Earth Observatory in New York uses a ketchup and tomato paste analogy to explain the difference between the magma found in Kilauea and the Volcano of Fire. 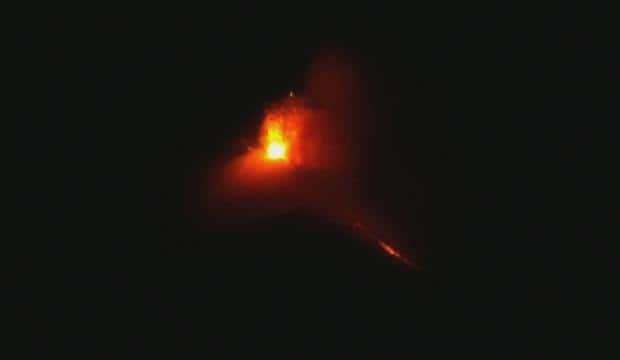 A volcano erupts in Guatemala

2 years agoVideo
0:46
The Fuego (Spanish for fire) volcano began erupting Sunday, sending columns of smoke and ash 10 km into the air, covering the area with ash 0:46

The lava of the shield volcano (Kilauea) spreads out slowly, while the lava of the stratovolcano (Volcano of Fire) is able to pile up in layers, or "strata" — a trait that, combined with its shape, has devastating consequences as gas pressure builds.

All active volcanoes produce gases that have the ability to accumulate.

Going back to the ketchup and tomato paste analogy, imagine gas that is unable to get through the thick magma. If you were to take a straw and blow, you'd need more force to get that bubble to erupt.

Because the magma is less viscous in Kilauea, the gases produced have an easier time escaping.

But in the Volcano of Fire, gases are put under enormous pressure and can erupt in violent, sometimes surprising explosions.

"If you're trying to blow bubbles through ketchup or through tomato paste, with one [the ketchup], the bubble would go through, but with the tomato paste, it would kind of blow the whole thing apart," said Lev, who was on the ground in Hawaii studying Kilauea two weeks ago. "It's the bubbles that drive how big those explosions are going to be."

Kilauea produces what's known as phreatomagmatic explosions. These occur when the magma travels through a tube below groundwater. This causes the water to boil instantaneously. Any rock or debris that have fallen into the lava tube are then ejected when pressure builds up, sending steam, ash, rocks and gas skyward.

The Volcano of Fire produces pyroclastic explosions, which are far deadlier.

These explosions, full of chunks of lava, ash, and volcanic gases, send extremely fast flows down the slopes of the volcano, destroying everything in their path. Anyone breathing in the ash and gas are immediately suffocated. People in a town or city within five kilometres of a pyroclastic flow can be burned and their community's buildings destroyed.

And that's what has occurred in Guatemala. Many villagers reportedly found themselves caught in the volcano's trail of destruction with no warning and no time to escape.

This week's eruption is the deadliest the country has seen in more than a century.