Scientists have found 21 different types of dinosaur tracks in an area rich with dinosaur findings.

Paleontologists have uncovered what they are calling an "unprecedented" number of dinosaur tracks in Australia.

In all, 21 different types were found along a 25-kilometre stretch of rock on the Dampier Peninsula in the Kimberley region of Western Australia. The area is so well known for its dinosaur findings that it's been given the nickname "Australia's Jurassic Park." 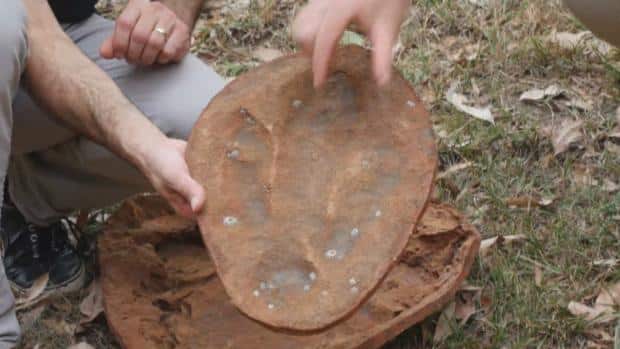 Finding the tracks was no easy feat. Unlike in the Badlands of Alberta, the team had to fend off sharks, crocodiles and extremely high tides in Walmadany, also known as James Price Point. But their hard work paid off, yielding the richest find of its kind in rock that is between 127 to 140 million years old.

The discovery began with a battle to prevent the loss of the area. In 2008, the government of Western Australia had selected the region as a preferred site for a $41 billion liquid natural gas processing plant.

In 2011, the area was awarded National Heritage status, however, and the gas project was abandoned.

Steve Salisbury, lead author of the paper that was published in the Journal of Vertebrate Paleontology, was contacted by the the Goolarabooloo people concerned about the loss of this rich region. Salisbury and his team spent more than 400 hours documenting the dinosaur tracks.

"It's such a magical place — Australia's own Jurassic Park, in a spectacular wilderness setting," Salisbury said in a press release.

Thousands of dinosaur footprints were found, and 150 were identified as belonging to 21 specific tracks.

Of those, five different types of predatory dinosaur tracks were found. As well, there were at least six types from long-necked herbivorous sauropods, four from two-legged herbivorous ornithopods, and six tracks from armoured dinosaurs. Within the tracks is the first evidence that the stegosaurs ever lived in Australia.