Trudeau announced Sidey and Kutryk as the newest members of the Canadian Space Agency's astronaut team after Ontario-born singer Shania introduced budding astronauts Juliet Munn-Lenz of Grand Prairie, Alta. and Sahana Khatri of Vaudreuil, Que. Twain told the two youngsters and Canadians that you're never too young to start following your dreams.

Sidey and Kutryk were chosen from an initial pool of 3,772 applicants who met the minimum criteria set out by the CSA.

Sidey told the crowd in Ottawa on Saturday that she was inspired to become an astronaut in 1992 when Roberta Bondar went into space aboard the space shuttle Discovery. She said she had the opportunity to attend a speech in Calgary by Canada's first female astronaut.

"I remember looking up to her being excited at the idea of being a scientist, being a Canadian and having the opportunity to explore places beyond our world," she said.

"I'm grateful to have had that role model and that memory makes this moment so powerful for me."

Kutryk, for his part, said he is honoured to be joining the Canadian Space Agency. 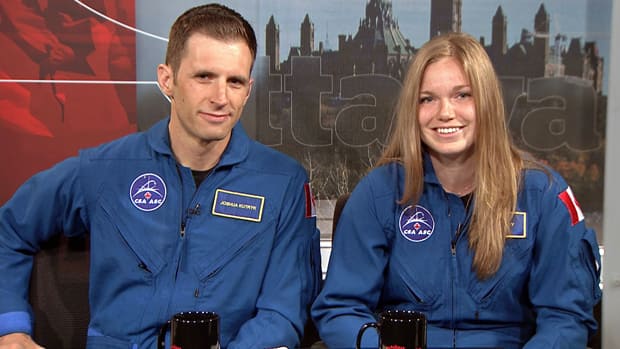 3 years ago
5:41
Jenni Sidey and Joshua Kutryk will begin a two-year training program in Houston this August 5:41

"Throughout the recruitment campaign, Jenni and I met some amazing Canadians, scientists, doctors, engineers, pilots like myself. There is so much talent in this country," he said.

"I stand on the shoulders of the great Canadian astronauts before me, they inspired me to be the best that I could be."

Sidey and Kutryk will be reporting for training at Johnston Space Centre in Houston later this month.

The two-year training program the pair will undergo includes instruction on systems on the International Space Station, spacewalks and Russian language training.