Ever wish your bike could give you directions while you ride, turn on a motor to give you a boost up steep hills, or alert you if someone tries to steal it from its parking spot? Here's a look at some gadgets designed to give your bike those kinds of superpowers. 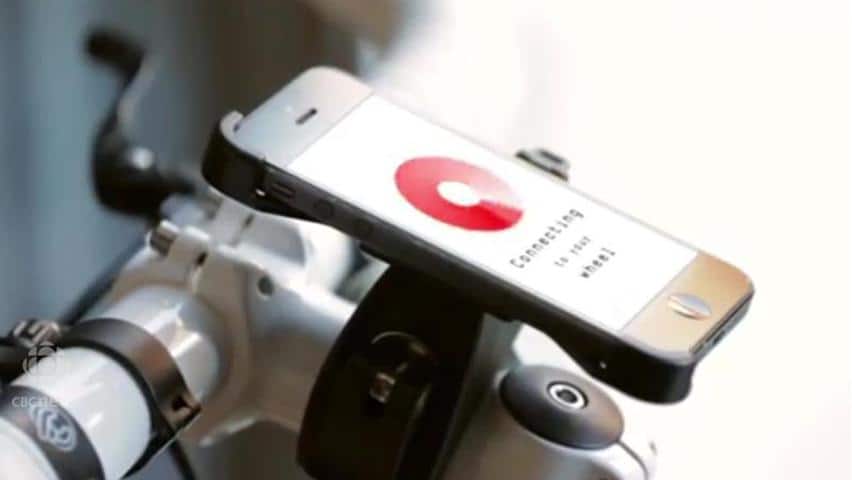 5 years agoVideo
2:08
Technology once reserved for cars may soon become commonplace on bicycles 2:08

Ever wish your bike could give you directions while you ride, turn on a motor to give you a boost up steep hills, or alert you if someone tries to steal it from its parking spot? Technologies that give your bike such superpowers are now hitting the market, thanks to bike-friendly tech startups, including many in Canada.

Among them is Montreal-based SmartHalo, which is making a device that mounts on the handlebars of any ordinary bike and connects to an app to provide features such as turn-by-turn directions, speed and distance tracking, and a security alarm. As of Wednesday afternoon, it had raised nearly $260,000 from more than 1,600 backers, with 21 days left in the campaign.

"The response from the public has been incredible," said Xavier Peich, the company's business director.

Peich, who himself cycles to work daily, said the number of cyclists on the road in Montreal and other parts of the globe, including Europe and the U.S., has exploded in the past decade.

"This drives demand for this kind of device," he said.

"There's smart cars, smart houses, smartphones. It seems like bikes have been stuck in the past for a while now and this device just brings [them into] the future."

SmartHalo is one of many high-tech upgrades for the low-tech bicycle that have been catching the eye by tech-savvy cyclists and generating huge numbers of pre-orders on crowdfunding sites.

Last year, Toronto-based Vanhawks broke records when it raised $820,083 from 820 backers on Kickstarter to develop a carbon fibre smart bike with similar features to SmartHalo.

Mia Kohout, CEO and editor in chief of Vancouver-based Momentum Magazine, which focuses on the urban cycling lifestyle, says new high-tech gadgets targeted at cyclists are "a pretty big trend."

"A lot of these gadgets are not being made by typical bike companies. They're being made by all these young people who are working in digital technology and digital media," she said.

The millennial generation is taking up cycling more quickly than the rest of the population, she added.

"And it's these young people, these millennials, who are so attached to their digital devices. So they have a different take and need [or] would love this kind of technology to be part of their daily life, which for a lot of them includes riding a bike."

For her, the most interesting technologies are auto-locking, keyless smart bike locks such as the Linka Lock made by Oakland, Calif.-based Velasso, which includes a built-in alarm and GPS for tracking a bike stolen with the lock still attached.

Most of the Toronto commuters stopped by CBC News this week as they passed through a busy intersection at Bathurst and Adelaide streets said they don't currently use any apps or technology when they cycle. But some said they were interested in directions, turn signals or an electric-assist motor to help them up hills — all of which are becoming available on the market.

Here's a more detailed look at some of the technologies you can use to make your bike ride smarter than ever.

The Copenhagen Wheel, made by Cambridge, Mass.-based Superpedestrian, is a wheel that promises to transform any hybrid bicycle into an electric hybrid quickly and easily. The wheel contains a motor and sensors to measure your effort so it can give you a boost when you need one. It can be pre-ordered for $949 US.

The Linka Lock, made by Oakland, Calif.-based Velasso is a keyless, auto-unlocking smart bike lock that has a built-in alarm to deter thieves and a GPS to track your bike if it's stolen with the lock attached. An app that goes with the lock, which can be pre-ordered starting $99 US, will alert you if you park in a high bike theft area.

The Recon Jet is a pair of smart sunglasses similar to Google Glass designed for sports like cycling. It has a built-in screen that doesn't obstruct your view but that you can access by looking down to track things like your speed, distance, and heart rate, along with a camera that can take photos and video. The $699 US device is made by Vancouver-based Recon Instruments, which was bought by chip maker Intel for $175 million.

SmartHalo is designed to turn any bike into a "smart bike" using a smoke alarm-sized device mounted on the handlebars. The device connects wirelessly to a smartphone app to give you turn by turn directions using an LED halo of lights. It automatically tracks distance, speed, and elevation while you are moving, turning off when you stop. Its built-in front headlight automatically turns on when you ride after dark and turns off when you park. It's also equipped with a motion-sensing alarm that goes off if someone tampers with your bike. The device will retail for $149 US, but is available for pre-order on Kickstarter for a discounted price.

The Valour is a carbon fibre smart bike made by Toronto-based Vanhawks. It tracks distance, speed and other performance indicators, has sensors that detect cars in your blind spot, and offers turn by turn navigation using flashing LED lights. The bike can also communicate wirelessly with other Vanhawks bikes, creating a network that can help crowdsource better routes and track stolen bicycles. The bike currently sells for $1,249 US plus $150 shipping.

These smart cycling gloves, made by San Francisco-based Zac Vorhies, have built-in blinking LED turn signals that automatically activate when you raise your hand to signal while cycling. The gloves, designed to make cycling safer, adjust their brightness for daytime and night lighting. The electronics can be removed from the gloves for washing. The gloves are for sale online for $74.95 US.

With files from Shawn Benjamin