Scientists have taught a captive killer whale to imitate human speech, and have recorded the female orca mimicking words including "hello" and "one two three."

Ability to imitate others suggests orcas can transmit culture 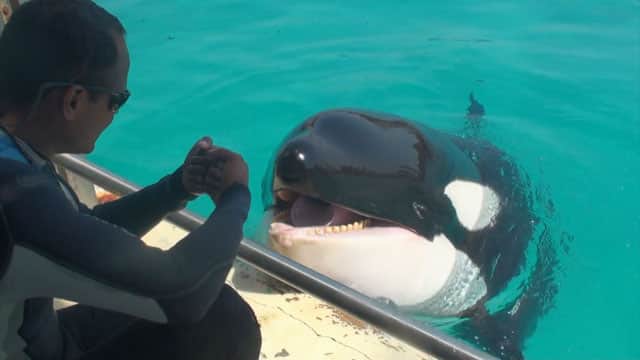 Scientists have taught a captive killer whale to imitate human speech, and have recorded the female orca mimicking words including "hello" and "one two three."

Wikie, a 14-year-old captive-born orca at Marineland Aquarium, in Antibes, France, imitated the words well enough, some of the time, that they were recognized by six humans who heard recorded clips of its voice, report researchers in a paper published in the journal Proceedings of the Royal Society B. The humans were asked to identify which clips contained the word or words that Wikie was asked to imitate.

"We were surprised," said Jose Abramson, the researcher at the Universidad Complutense de Madrid who led the study. "We didn't have any idea that they could be capable of this."

A computer analysis of the recorded clips judged to be recognizable words by the humans confirmed that the sounds produced by the trainer and the whale were similar.

The objective of the study, which involved other researchers from Chile, Spain, the U.K. and Germany, wasn't to teach Wikie to speak, but to determine whether orcas are able to learn to make novel sounds through imitation, Abramson said.

In the wild, orcas make three types of sounds:

Researchers had previously observed that orcas from different groups or pods have pulse calls with different "accents" or "dialects." Some have suggested that these are learned socially, the way human language and culture are learned.

Abramson wanted to test if orcas are capable of social learning through imitation.

"For most people, culture is what separates us from the rest of biology," he said. "In fact, imitation, along with teaching, have been claimed to be the key defining characteristic of what makes human culture unique."

Wikie had been previously trained to imitate its trainer's actions on command, and Abramson wanted to see if the orca could also imitate sounds.

Dolphins and belugas, which make a wider range of sounds in the wild than orcas, have been previously heard imitating humans.

But while orcas have been heard making sounds similar to those of orcas from other groups, sea lions and bottlenose dolphins, they were thought to have a more limited ability to produce different sounds, and it wasn't confirmed that they had learned those sounds through imitation. 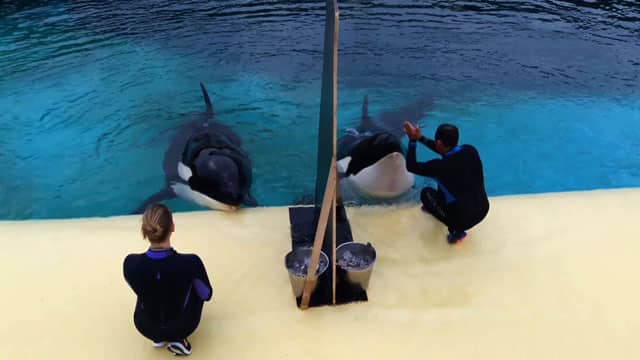 Abramson wanted to try to get Wikie to imitate sounds that were different from natural whale or dolphin sounds in order to confirm that it was in fact learning through imitation. The researchers chose two types of "novel" sounds:

The trainers suggest this may have been partly because they didn't reward Wikie for "correct" pronunciation to avoid influencing how it spoke.

But Abramson said it was remarkable Wikie was able to imitate human speech as well as the orca did, given that whales don't use their mouths and vocal cords the way humans do – they vocalize by inflating air sacs in their nose.

The results suggest that orcas can learn new vocalizations throughout their lives, unlike many animals that can only do so when young.

They also add to evidence that orcas' dialects are learned through imitation – and are therefore a form of culture, Abramson said.

John Ford, an orca researcher at the University of British Columbia and Fisheries and Oceans Canada, called the study "fascinating," and said it strongly supports previous anecdotal evidence that killer whales can learn through imitation.

"It is now clear that vocal learning within killer whale groups is responsible for the evolution of family-specific dialects that are central to the cultural lives of these socially complex and intelligent mammals," he told CBC News in an email.

Paul Spong, an orca researcher and founder of the whale research station OrcaLab on Hanson Island, B.C., said the paper "certainly" shows that orcas are capable of vocal learning, but the results aren't a surprise. His research team has observed individual wild orcas imitating the calls of other groups – "so well, I might add, that they fool us into thinking the other group is present," he told CBC News in an email.

But he added, "While the study is interesting as science in some ways, it does not and cannot justify the keeping of orcas in captivity."