SpaceX rocket blasts off with new Canadarm2 hand aboard

A SpaceX rocket blasted off Friday morning with a new hand for the International Space Station's robotic arm, Canadarm2, along with a shipment of mice, a robot with AI, and food for future missions. 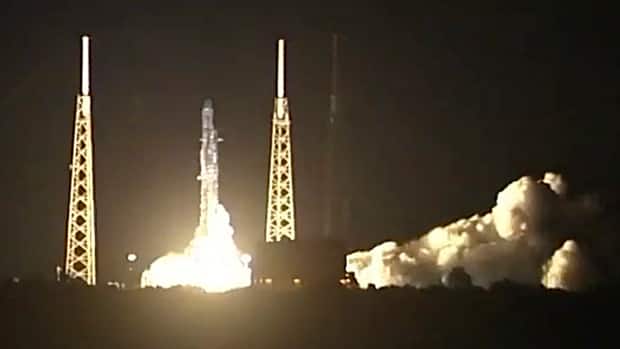 A SpaceX rocket that flew just two months ago with a NASA satellite roared back into action Friday, launching the first orbiting robot with artificial intelligence and other International Space Station supplies, including a new hand for the station's Canadarm2 robotic arm.

The used Falcon 9 rocket blasted off before dawn, hauling nearly 2,700 kilograms of cargo, including the spherical AI bot named Cimon; genetically identical mice, or mousetronauts; and super-caffeinated coffee for the crew of the International Space Station.

The shipment — packed into a Dragon capsule that's also recycled — should reach the station Monday.

The new Canadarm2 hand will be an in-orbit spare in case of a malfunction, a spokesperson for the Canadian Space Agency (CSA) said via email.

These hands — officially called Latching End Effectors (LEEs) — are the grippers that help the robotic arm perform maintenance tasks on the ISS and catch supply ships.

LEEs are routinely replaced due to normal wear and tear, according to the CSA.

The Dragon capsule will also deliver food for Canadian astronaut David Saint-Jacques to eat during his space mission, set to begin in December. And it will deliver supplies and equipment for science and research.

It was an especially gorgeous launch, delighting spectators as the rocket plume expanded in the clear night sky like a giant halo, beneath a nearly full moon.

This marked SpaceX's fastest reflight of a booster. The same first-stage booster launched the planet-hunting Tess satellite in April. The capsule, meanwhile, flew in 2016.

Aiming to lower launch costs by reusing rockets, SpaceX did not retrieve the booster for another flight and, instead, ditched it in the Atlantic. The company is switching to a new and improved line of boosters.

The space station and its six inhabitants were sailing 400 kilometres (250 miles) above the South Pacific when the Falcon 9 took off.

The Dragon will deliver the robot Cimon, pronounced Simon. Slightly bigger than a basketball, the round, 3D-printed German Space Agency robot will assist German astronaut Alexander Gerst with science experiments. IBM provided the AI brain. Cimon will remain indefinitely on the orbiting lab, continually getting updated via IBM's Cloud.

Also on board are 20 brown female mice, half of them genetically identical from one strain or family, and the other half identical from another family. Northwestern University researchers want to study the bacteria in the animals' guts and compare them to their identical sisters on the ground. They did the same with Scott and Mark Kelly, NASA's former identical twin astronauts, during Scott's yearlong space station mission a few years ago.

And then there are 60 packets of Death Wish Coffee from New York state. A former astronaut helped arrange the java delivery for the space station's Serena Aunon-Chancellor, a coffee lover.

With files from CBC's Lavaniya Rajah