An unlimited online movie streaming service similar to Netflix has been launched by internet and cable provider Shaw Communications. 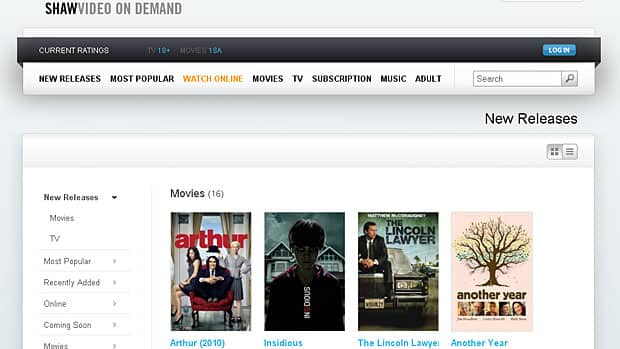 9 years agoVideo
1:48
Shaw Cable is taking aim at Netflix with their own service for subscribers to watch movies over the internet, the CBC's Meera Bains reports 1:48

An unlimited online movie streaming service similar to Netflix has been launched by internet and cable provider Shaw Communications.

The Shaw Movie Club will cost $12 a month for unlimited access to "hundreds of titles" that can be watched online or streamed directly to a customer's TV, the company announced Friday.

It will be available to customers who already have services with Shaw. The company offers services in Alberta, B.C., Manitoba, Saskatchewan, and Ontario, although some services are only available in certain provinces or regions.

Shaw Movie Club content can be viewed without counting toward a customers' data usage, president Peter Bissonnette told the Calgary Herald in an article published Thursday.

Late Friday, he clarified to The Canadian Press that this will only be the case when the service is accessed via digital cable boxes — the method the company anticipates will be most popular.

The content will be part of consumers' monthly bandwidth use when streamed and watched directly from a customer's computer, but Bissonnette said that Shaw's data caps are high enough that it will be "inconsequential in terms of capacity."

Netflix offers unlimited streaming of movies and TV episodes — including high-definition video, something that Shaw does not yet offer — for $7.99 a month.  The company had 800,000 Canadian subscribers at the time of its quarterly report in April, just seven months after its Canadian launch.

One of Netflix's challenges has been caps imposed by Canadian internet service providers on their customers' internet usage, as streaming video consumes high amounts of data. Customers who exceed the caps are hit with hefty surcharges of up to $2.50 per gigabyte.

Bissonnette's revelation caused an immediate outcry from Open Media, a Vancouver-based internet advocacy group that has lobbied hard against internet billing based on a customer's usage.

"It's unfair for Shaw to restrict access to competing services by making them more expensive to use than Shaw's own services," said Steve Anderson, executive director of Open Media, in a statement early Friday.

"It clearly demonstrates that internet metering isn't about paying for use; it's about prioritizing Big Telecom's services in order to hogtie the competition and assert dominance in multiple markets."

The Canadian Radio-television and Telecommunications Commission is in the midst of hearings about usage-based internet billing, where large telecommunications companies have argued that heavy internet users cause internet congestion that affects all other users and their behaviour needs to be managed with the right kind of pricing.

However, consumer groups such as Open Media have argued that internet service providers should tackle congestion by investing more in their networks, rather than impeding Canadians from taking advantage of new services available on the internet, such as video streaming.

Shaw did not mention data caps at all in its news release about its new service Friday.

The company said its new service can be accessed:

The company said it plans to make high-definition movies available at Shaw Movie Club for an extra $5 a month later in the summer, and to expand its Shaw Gateway service to Vancouver and other parts of Canada.