Scientists may have discovered massive lake under Antarctic ice

New radar images from the South Pole have reveal a feature that could be an enormous, previously unknown lake hidden under kilometres of ice, and isolated from the rest of the planet for millions of years. 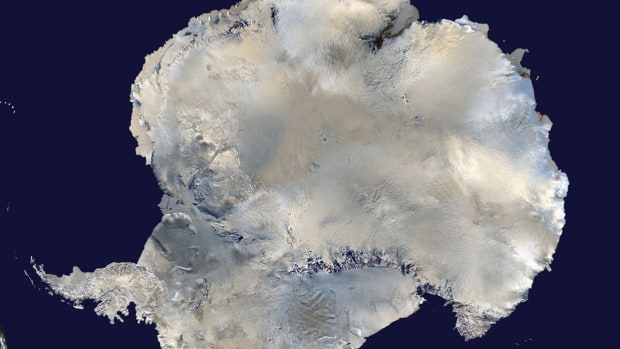 New radar images from the South Pole have revealed a feature that could be an enormous, previously unknown lake hidden under kilometres of ice, and isolated from the rest of the planet for millions of years.

CBC Radio science columnist Torah Kachur has looked into what this discovery might mean, and why it has scientists particularly excited.

What is the significance of finding a new lake in Antarctica?

There are a lot of reasons why this discovery is so interesting. First, the lake (if it is indeed a lake) is covered in ice — or at least that's what the radar suggests. And it's huge — over 12,000 square kilometres.

It could also reveal an entire ecosystem frozen in time from millions of years ago.

A confirmed Antarctic lake hidden deep under the ice was discovered in the 1990s. Lake Vostok has been encased in four kilometres of ice for millions of years. Scientists have drilled holes to see what was in the lake, and so far think they have found unique DNA that likely belongs to a class of microbes called extremophiles — bacteria that thrive under extreme conditions like no light and extreme cold, which is what they'd experience in this lake.

How many more species are in there? Analysis is ongoing, and we'll have to wait and see if rumours of fish and a thriving ecosystem are true.

But there's quite a bit of excitement amongst biologists for this potential new find.

What's the next step?

This is really just the start of the discovery phase. It was around Christmas of 2015 that Chinese and U.S. researchers made over 100 passes in a plane to take radar images of the subsurface. That's when they noticed a long and wide feature under the ice.

The next step is confirming what the feature really is — right now, based on the data, it looks like it's either a lake or a slurry of wet sediment. It's located in an area of Antarctica called Princess Elizabeth Land, on the eastern coast of the continent, where virtually no one visits.

That inaccessibility is part of the allure, as it will be untouched. The more specific surveying has been done, but results aren't fully analyzed yet. It's important to remember this is under kilometres of ice. This is an extremely inhospitable and inaccessible part of our world and in fact, researchers have to wait until next Christmas before the season opens again for more observations.

In the meantime, there is a lot of data to analyze from the previous surveys. Now the researchers can look at the data and determine if they've found a lake or more of a slurry of wet sediment.

What's the difference between a slurry and a lake?

There are different implications of both — but both are equally exciting.

Stewart Jamieson is with Durham University in the U.K., and is the lead researcher on this project. He said that if it is a lake, it would tell us several important things.

If there's water at the base of the ice sheet, that would help researchers understand how the ice flows.

"But what it also opens up is the possibility to access that water, to drill into it, to take samples, to look for life," he said.

Studying the lake and surveying the life might give us clues for how and where to look for life on other planets like Mars.

If there's life in the lake, then we can study how evolution has shaped the creatures that we find there.  The lake may be isolated from the outside world, which means no light and no transfer of nutrients or resources. The life living there would be wholly independent from the rest of the planet and would have evolutionary forces that drove all sorts of adaptations we can only, at this point, imagine.

What would we learn if it is more like sediment?

If it's sediment, that means that likely there will be organic matter in that sediment. Each layer will tell a story about how the environment has changed throughout history.

And there's something bigger at stake when we study the geology and history of Antarctica, how it evolved, and what kinds of tectonic shifts have happened there, said Stewart Jamieson.

"We would look to drill something like that, or look to access sediment to think about investigating how the ice has waxed and retreated over long time periods, and in particular, how the ice might respond under warmer climate conditions and high carbon dioxide conditions. Sort of thinking about analogues for the modern climate."

So no matter what they find, it will be interesting.

And not only that, no matter what happens, the knowledge that will be gained about how to drill into Antarctic ice sheets could be crucial to understanding how to sample places equally as inhospitable in the universe — possibly even somewhere like Titan, one of Saturn's moons.

So whether it is a lake or a slurry of sediment, it's a win-win from an experimental perspective.