Sea dragons aren't very common, found in the waters off the coast of southern Australia. For some time, only two types were known: the leafy sea dragon and the common sea dragon (sometimes also called the weedy sea dragon). 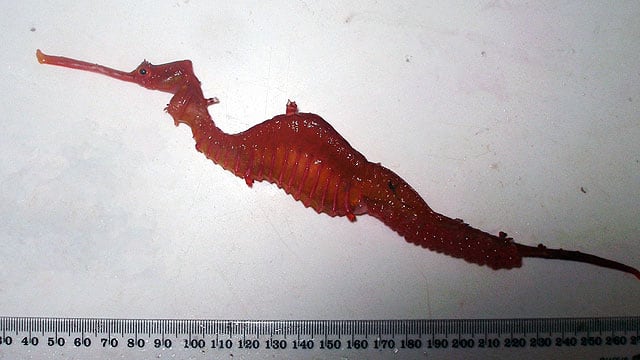 Then, in 2015, PhD student Josefin Stiller discovered that four samples collected over the years — the first in 1919 — had been misclassified as a common sea dragon. Instead, it was its own species, named the ruby sea dragon.

While this was an exciting discovery, a live ruby sea dragon had never been recorded — neither by divers nor those in the fishing industry.

Fast-forward to 2016, when Stiller, together with Greg Rouse of the Scripps Institution of Oceanography and Nerida Wilson of the Western Australian Museum embarked on a study to sequence the DNA of both the common and leafy sea dragons, part of Stiller's ongoing study. They also decided to try for the ruby sea dragon, though they didn't hold out much hope.

"We had a brainstorm: 'why don't we go to the place it was first trawled in 2007?'" Rouse told CBC News. "They kept very good records of where the net went in."

Using that data, they believed that the ruby sea dragon lived at a depth of around 55 metres, about 30 metres deeper than its cousins. Diving would be dangerous, so they deployed a remote underwater camera.

As water moves up from the Antarctic, it heavily influences the environment, Rouse said. Even shallow waves make a big difference at that depth. On one particular day, the only thing the remote underwater camera could see was sand churned up by the moving water.

"I can tell you we did not really expect to find them," Rouse said. "And unbelievably, really, we found it."

Incredibly, the team found not just one, but two — on the final day of the expedition.

The results of the study were published in Marine Biodiversity Records.

Seeing the ruby sea dragons in their natural habitat helped the researchers learn a lot more about them.

Because the only known samples had washed up on shores, not much was known about the lobes, protrusions from their body.

The common sea dragon has long, fleshy ones; those of the leafy sea dragons are even more elaborate. Part of the reason the ruby sea dragon had been misclassified was because it was believed that the longer lobes had been broken off, leaving it with just stumps.

Instead, the video showed that the ruby sea dragons' lobes were just that: stumps.

As well, it wasn't clear why the fins behind the head were quite bulgy, with a lot more muscle than those of the other sea dragons. But now the team believes that it is used to help it swim at deeper depths.

As for the tail, all the dead specimens were found with straight ones, common to the other sea dragons. However, the video showed that, in the wild, their tails are actually curled. The researchers surmise that, because of the active waters at that depth, they may use it to cling to flora, though they hadn't directly observed that behaviour.

Their findings have evidently drawn attention in high places:

Rouse said that finding live specimens of such a beautiful creature was exciting and illustrates that more ocean research is needed to better understand a world of which we know very little.

"Who knows how many other smaller things or less spectacular things are down there waiting to be discovered?" he said. "When we find something spectacular like this, it's a sign there's a lot more to do."