Pope Francis called the astronauts and cosmonauts on the International Space Station Thursday, letting the world eavesdrop as they discussed love and The Little Prince.

Pope Francis took a small step toward improved Vatican-Russian relations Thursday when he chatted with Russian cosmonauts and praised their understanding of love during a telephone call with the International Space Station.

Italian astronaut Paolo Nespoli played translator during the roughly 20-minute call that was interrupted once when the line dropped at the orbiting laboratory.

Like a curious child, Francis peppered Nespoli and the five other crew members with questions as simple as what they liked to do in space, what surprised them most, and what inspired them to become astronauts. 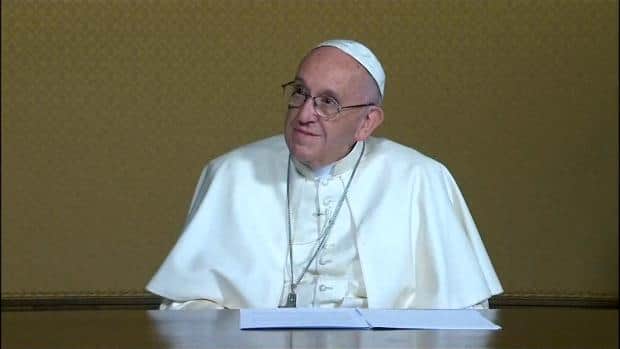 3 years ago
2:16
Chats with astronauts on International Space Station about beauty and fragility of Earth 2:16

The responses he received, in particular from Russian cosmonauts Alexander Misurkin and Sergey Ryazanskiy, marked another small step for the Vatican's long tense relations with Orthodox Russia. Francis has made improving those ties a priority of his pontificate, and became the first pope in a millennium to meet with the Russian Orthodox patriarch last year.

Ryazanskiy told Francis that he had been inspired by his grandfather, a Soviet engineer who helped build Sputnik, the world's first artificial satellite that marked the beginning of the Space Age.

"For me it is a great honour to continue what he was doing to fulfil his dreams with a space flight, the future of all humanity," he told the pope in English.

Francis, who has long exalted the role of grandparents, marveled at his response. "That's our strength: Never forget roots. It does me good to hear this! Thank you," Francis said.

Francis also praised Russian cosmonaut Alexander Misurkin: Francis had asked how the crew members understood Dante's verse that love is the force that moves the universe.

Misurkin told him in Russian, translated by Nespoli, that he had been reading Antoine de St. Exupery's "The Little Prince" while in space and was taken by the main character's understanding of love.

"Love is the force that gives you strength to give your life for someone else," he told the pope.

Francis lit up at his response, saying "It's clear you have understood the message that St. Exupery so poetically explained, and that you Russians have in your blood, in your humanistic and religious tradition."

It was the second papal phone call to space: Pope Benedict XVI rang the space station in 2011, and asked about the future of the planet and the environmental risks it faced.

Francis' papacy has been marked by his concern for the environment.

Space station Cmdr. Randy Bresnik told Francis that what he most enjoyed in space was being able to "see God's creation maybe a little bit from his perspective."

"You see the thinness of the atmosphere, it makes you realize how fragile our existence here is," he added.

Bresnik, a U.S. Marine who flew combat missions during the Iraq war, told Francis that what struck him most was that from space there are "no borders, there is no conflict, it's just peaceful."

"People cannot come up here and see the indescribable beauty of our Earth and not be touched in their souls," he told the pope.