New research published in the journal Marine Policy shows that humanity's garbage isn't just floating on the ocean surface where there might be some hope of cleaning it up. Video footage has captured images of garbage — including single-use plastics — on the bottom of the earth's deepest ocean trench more than 10 km below.

You've heard of the Great Pacific Garbage Patch, the region of mostly plastics that's grown in area three times the size of France.

But new research published in the journal Marine Policy shows that humanity's garbage isn't just floating on the ocean surface where there might be some hope of cleaning it up. Video footage has captured images of garbage — single-use plastics bags, to be specific — on the bottom of the earth's deepest ocean trench more than 10 kilometres below the surface.

The study authors used images and video compiled into the Deep-sea Debris Database, which was made available for public use a year ago by the Japan Agency for Marine-Earth Science and Technology (JAMSTEC). Collected since 1983, the images were gathered by deep-sea submersibles and remotely operated vehicles.

​Pollution from plastic has emerged as a major threat to ocean ecosystems, and previous studies have documented the waste that accumulates on coasts and ocean surfaces.

But until now, limited information has been available on the scale of the human debris problem in deep seas.

This study showed that even the world's deepest environment is now threatened by our daily activities- Sanae  Chiba, ocean scientist

"From the beginning we expected we probably would find lots of plastic products in the deep sea everywhere,"  said Sanae Chiba, the study's lead author and a senior scientist at JAMSTEC currently on secondment to the UN Environment World Conservation Monitoring Centre in Cambridge.

She said the research started when she and her colleagues realized they had an enormous amount of information available for analyzing debris in the ocean from the 30-plus years of images gathered during high-tech exploration of the ocean depths around the world. 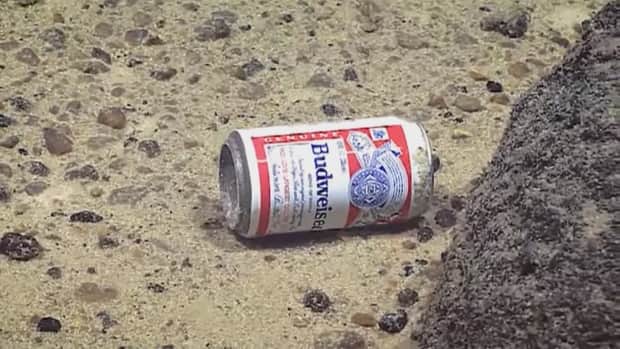 NOAA releases images of pollution near bottom of Mariana Trench

2 years ago
0:58
Scientists report debris found at depths of more than 10 kilometres 0:58

They were right. Among all the forms of man-made debris in the ocean — including fishing gear, metal, glass, rubber and other materials — clearly visible plastics made up about 33 per cent of the total. Of those so-called macro-plastics, nearly 90 per cent were single-use items like plastic supermarket bags, said Chiba.

"We expected it but it's still surprising that we found these pieces of plastic bag in the Mariana Trench, that is over 10,000 metres deep. It's the deepest part of the ocean where only the highest technology submersible can reach," she said.

"For most people, the deep-sea environment is far away. Most people believe it's detached from our daily lives," she said. "This study showed that even the world's deepest environment is now threatened by our daily activities.

Susanna Fuller, a senior project manager with Oceans North, a non-profit that's unaffiliated with the research, said these study results are "another wake-up call to the impact that humans are having in places we have never been."

While she's encouraged by the amount of conversation happening about plastic pollution, Fuller said it's not enough.

"We need to move from those good intentions and words to action. I'm just kind of amazed that places like Canada haven't said, 'OK, guys, no more plastic bags. If Kenya can do it, we can do it.'

"Some of the larger grocery stores and businesses are getting on side, but it does need a regulatory response. I think we're getting to that point."

Chiba said she hopes governments will work together to tackle the problem of ocean plastics.

"No single country can solve the problem because once the plastic debris enters the ocean it's transported everywhere," she said. "It's an international problem."

The good news, she said, is that compared to other global problems such as warming and ocean acidification, plastic pollution is easier to understand and manage. "If we act now, we can solve it."