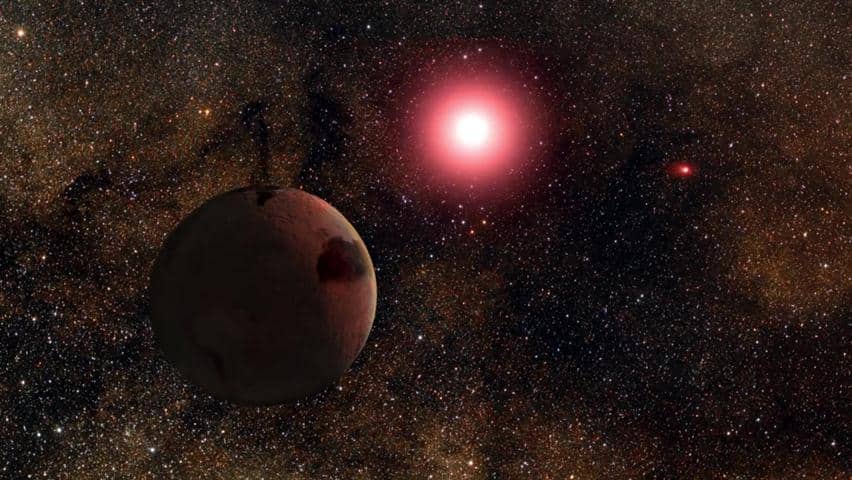 While giant planets have been found orbiting both stars of binary star systems, the new planet would be the first roughly Earth-sized planet to be found in a binary system like this, and it opens new possibilities for places in the universe where potentially habitable planets might be found.

"The planet, although it is a terrestrial [rocky planet] similar to the Earth, is in a system that is dramatically different from the solar system," said Cheongho Han, a professor at Chungbuk National University in South Korea and co-author of the paper, in an email to CBC News. "I think this is the most exciting part of our discovery."

The study, published this week in Science by four international teams of astronomers, has also generated a new technique for hunting planets in places where they had been hard to detect.

The new planet, called OGLE-2013-BLG-0341LBb, is located about 3,000 light years from Earth and has about twice the mass of the Earth.

It orbits a small dwarf star – our sun is seven to 10 times more massive and 400 times brighter. Such red dwarfs or M-stars are the most common type of star in our Milky Way galaxy.

The dwarf star is one of two that orbit each other in a binary system. The two stars are about as far apart as the sun and Saturn.

If you were to stand on the planet's surface, and look up at the sky, "these stars would look very red, like our sun at sunset," said Andrew Gould, an Ohio State University astronomer and lead author of the study.

One star would appear to be a small fraction the size of the sun – about 1/7th of the diameter of the sun – and would be 100 to 200 times brighter than our moon, Gould said. The other star would be a red pinpoint of light as bright as our moon.

Of course, you probably wouldn't stand on the planet at all – since its star is so dim, the planet's surface temperature is estimated at around -200 C.

But its discovery suggests that there may be more comfortable planets in similar binary star systems.

Astronomers estimate that stars in binary systems may make up more than half the stars in our galaxy, but up until recently, there was some debate about whether closely-spaced binaries could host habitable planets.

That's because planets are thought to form from a "protoplanetary" disk of dust around a star that might be disrupted by a second star.

Other planets have been found with binary stars, but they have mainly been gas giants orbiting either both stars or one star in a system where the two stars are very far apart.

More than 1,000 planets have been discovered outside our solar system so far. But most have been found using techniques that make it easier to find large planets orbiting close to bright stars in certain orientations relative to the Earth.

The new planet was found using a technique called gravitational microlensing, which has helped discover about 50 planets so far, Gould said. It relies on the concept from Einstein's Theory of Relativity that gravity will bend light.

"Only one in a million stars work," said Gould, part of the Microlensing Follow Up Network, one of four microlensing research teams involved in the research.

The teams use telescopes in Chile, New Zealand, Israel and Australia to watch for such alignments, which usually only last about a month. Such alignments allow researchers to use the light from the source star as a tool to study relatively small, dim lens stars, which in many cases are too dim to be seen directly — and to hunt for planets around them.

That's how gravitational lensing usually discovers planets, and that's what happened in this case. The researchers only realized after the planet moved too far away from the image to be detected that the lens star was one twin in a binary system.

As the lens star and the source star became more perfectly lined up, the images became so magnified that they interacted with the lens star's twin. An optical phenomenon called a caustic crossing suddenly caused the light from the distant star to get brighter when viewed from Earth. Gould said it's the same phenomenon that causes you to see bright arcs of light on the surface of a swimming pool.

When Han analyzed the light during the caustic crossing, he noticed that it contained a signal from the planet's gravity. From that, he calculated the exact same mass and orbit that was calculated using the conventional method.

Essentially, he had found a brand new way of detecting a planet in a binary star system.

That opens the door to many new planet discoveries. For one thing, it allows researchers to discover planets around binary stars – something they had previously not been attempted due to the complications involved. For another thing, the signal from the caustic crossing of the star's twin is far easier to detect than the more direct signal from the planet itself, Gould said.

"It means that it's going to be much easier to find this type of system in the future."