Want it tomorrow? Some online shopping habits are terrible for the environment

Have you ever picked two-day shipping because it's free with an Amazon Prime membership? Or bought several sizes of shoes online, planning to return the ones that didn't fit? Such choices are terrible for the environment.

'If you send something back, think about what happens to it'

Have you ever picked two-day shipping because it's free with an Amazon Prime membership? Or returned an item of clothing using the free return shipping label because you weren't sure which size to buy, so you bought more than one?

What you may not have realized is those convenient perks can drastically expand the carbon footprint of an online sale. And think of that multiplied by millions of shoppers across Canada and billions around the world.

"I think everyone should care about it," said Sharon Cullinane, a researcher at the University of Gothenburg in Sweden who has been studying the environmental impact of online shopping for nearly a decade.

Black Friday, Cyber Monday and the weeks leading to and following them mark a pre-Christmas online shopping frenzy across North America, culminating in a parcel baby boom a week or so later.

On Dec. 4, 2017, Canada Post broke a record for most parcels delivered in a day — 1.83 million. Despite the current rotating strikes, the Crown corporation's parcel delivery revenue has been growing more than 20 per cent a year with the exploding popularity of online shopping.

In theory, buying online could be greener than going to a store.

A 2013 study from MIT's Center for Transportation and Logistics calculated that the carbon footprint of a traditional shopper purchasing a toy in a store is higher than that of someone who buys the same thing online with regular shipping (more about that later).

That's because parcel carriers use a more efficient delivery system than you driving to the mall, and the carbon footprint of a website is smaller than that of a brick-and-mortar store.

But Cullinane has found it isn't clear whether online or traditional shopping is greener because so many factors come into play. Here's a look at some, many of which shoppers have some control over.

'Colossal' stress on the logistics system

"Want it today?" Online retail giant Amazon routinely tempts customers with that question. And it offers free two-day shipping to customers who subscribe to its Amazon Prime service.

"The stress that puts on the logistics system and therefore the impacts on the environment … is quite colossal," said Cullinane.

Faster shipping completely changes what's needed to get your order to you, and that drastically increases the carbon emissions generated in the process — the MIT study found online shopping with rush delivery was less environmentally friendly than going to the store.

With normal shipping, retailers consolidate orders into as few boxes as possible, pack trucks as full as possible and choose the most efficient routes to make as many deliveries as possible over the shortest distance.

With faster shipping, all that becomes difficult or impossible, said Miguel Jaller, a researcher at the University of California Davis who studies sustainable transportation and logistics.

Emptier trucks have to deliver to fewer customers who are farther apart in order to meet deadlines. That means more trucks driving longer distances per delivery, and often multiple deliveries for the same order, generating a lot more emissions and traffic. In some cases, retailers may even have to use planes to move products from one warehouse to another to speed things up.

Jaller recommends not choosing faster shipping unless you need it, even if it's free or you've already paid for the option.

Maybe you bought three sizes of the same shoes because you weren't sure which would fit. Or added an item you didn't really want to meet the free-shipping threshold. Or just impulse-bought something that was on sale and then thought better of it.

They make people more willing to buy items they've never seen. But they come at a high environmental cost, says Cullinane, who's been studying returns in detail.

Her recent study found people tend to over-order online and have a return rate of about 25 to 30 per cent, compared to six to 10 per cent when they deal with physical shops.

And it's worst at this time of year. Canada Post said return volumes increased 17 per cent during Cyber Week last year compared to a week prior.

Returned items don't just go back to the local store — they often feed into a global logistics system that may take them to be processed in a country where wages are lower.

"The returned goods make journeys of thousands of miles," Cullinane said, adding that to make matters worse, retailers often expedite shipping to make an item available to another customer as quickly as possible.

Miik is also trying other methods to discourage returns, like putting better sizing information online and getting customer service to help customers find the right size.

But customers can also make a difference by choosing to order less and minimize returns, or returning items to a store if they were making that trip anyway, instead of shipping them.

Cullinane suggests, "If you send something back, think about what happens to it."

We're No. 1 in cross-border online shopping

According to the recent UPS survey, Canadians are the biggest international online shoppers in the world. Among Canadian respondents, 83 per cent had bought from an international retailer, most commonly in the U.S. or China. Most said it was because the brands or products they like were not available in Canada or were cheaper elsewhere.

Of course, buying from far away generates more emissions.

When you buy an international product from a local store, it probably came by boat and truck in a very full, efficient load. If you purchase something similar online, it makes a faster, sometimes complicated journey that generally involves air travel.

Cullinane recommends thinking about that before you buy something from overseas because it's a little cheaper.

And what if you have to return it? Her recent study notes that returns from Asia often go by air, "thus magnifying the adverse environmental impacts."

Sometimes when a delivery truck takes an online order to a customer's home, no one is there to accept it.

That means the truck needs to go back, perhaps multiple times, generating extra emissions, before dropping off the order or taking it to a post office or courier outlet where the customer has to retrieve it.

Cullinane has experienced 11 delivery attempts on an online order, even though she texted the delivery company every day to tell them she wouldn't be there.

One way to prevent this is for orders to be delivered to a nearby pickup point such as a store or post office. That can also allow delivery companies to consolidate many orders more efficiently, making that greener, provided it doesn't result in an extra long car trip for the customer.

Such delivery locations are common in Sweden, Cullinane said.

But in Canada, UPS found survey respondents had orders shipped somewhere other than their home only 38 per cent of the time. Only U.S. customers did that less often.

Cullinane suggests alternate delivery points might work better if governments got involved in making them public infrastructure like bus stops.

How about just buying less?

It goes without saying that the most effective way to reduce your online shopping carbon footprint is by buying less.

Unfortunately, Jaller's research shows that in fact, people are buying more, both online and offline.

In fact, the recent UPS survey found 40 per cent of Canadians might make part of the same purchase both online and offline, generating carbon emissions from both. They might visit a store to look at something, then order it online, or order most of their groceries for delivery, but pick up a few fruits and veggies in-store.

Jaller advises shoppers: "Either do one or the other."

He and Cullinane urge shoppers to be more mindful of what they buy, and plan ahead when they can.

Jaller suggests that if you need something regularly, it's better to get a subscription so retailers and logistics and delivery companies can plan for a more efficient delivery. 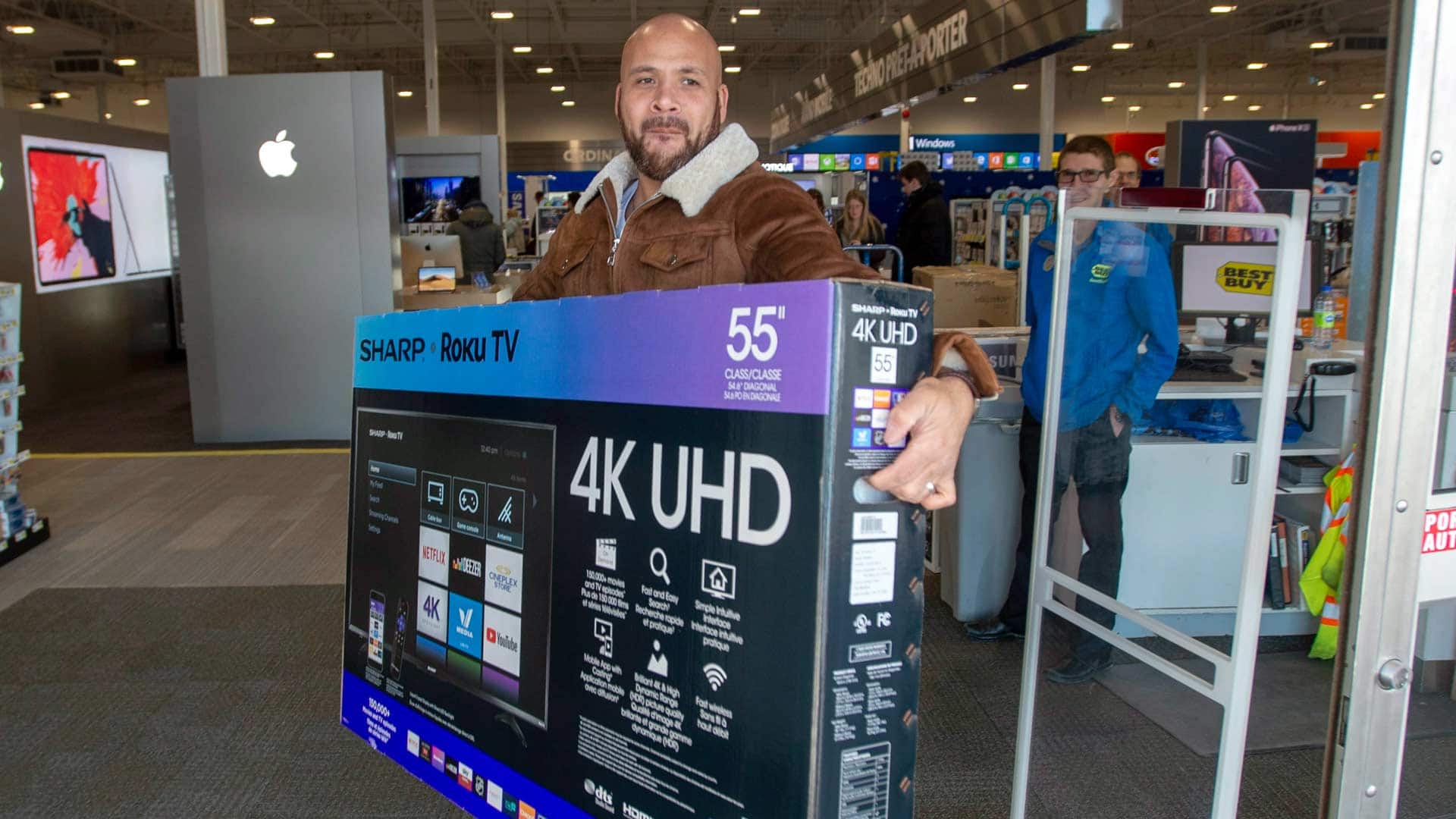 How some online shopping habits are terrible for the environment

2 years ago
3:35
What can be a convenient click away could drastically expand the carbon footprint of an online sale. 3:35