Apple's next iPhones will come without the analog headphone jack that has been standard on iPhones and most other electronic devices for years — making room for dual speakers.

Decision to ditch traditional headphones could cause an outcry from consumers 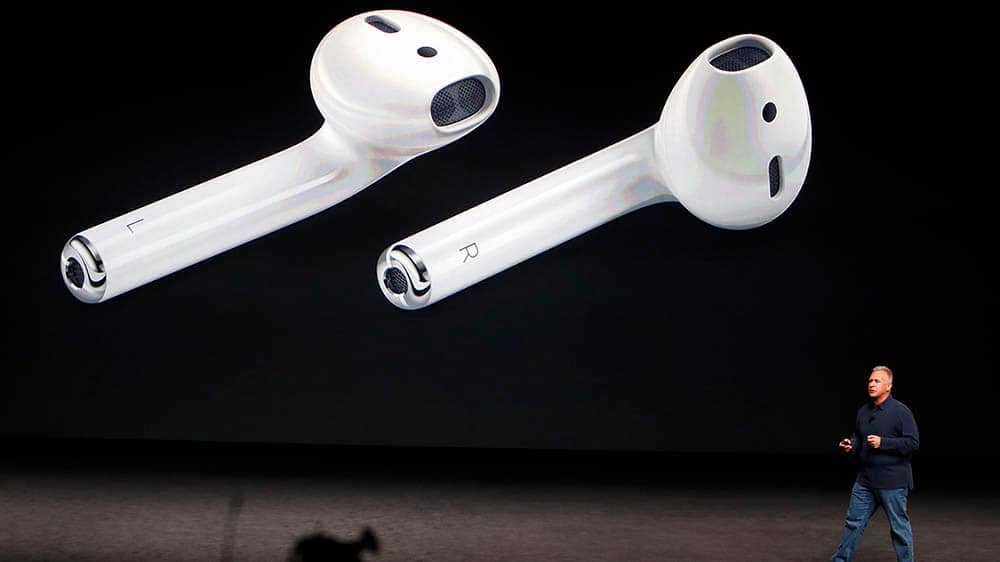 Apple's next iPhones will come without the analog headphone jack that's been standard on iPhones and most other electronic devices for years.

Instead, the company is making iPhone owners listen with wireless Bluetooth headsets or with earphones that can plug into the phone's digital "Lightning" port, which has been used primarily for charging.

The new phones will ship Sept. 16, with orders to start Friday.

Another change is that phone is getting more storage — the starter model will have 32 gigabytes rather than 16, which is what it had before.

Apple is doubling storage in higher-priced models, too — to 128 and 256 gigabytes.

Wireless earbuds to cost $160 US

Apple will include a "dongle" or wireless adapter with the iPhone 7 to allow those with older headphones to attach them to the Lightning port.

Apple marketing chief Philip W. Schiller says it comes down to "courage to move on to something new."

He said removing the port frees up space in the phone for a second speaker. He also said the Lightning port was designed years ago with digital audio in mind.

The new earbuds, called AirPods, will cost $160 US and will ship in late October.

Apple isn't the first to ditch the headphone jack. Motorola quietly did so a month ago with some models of the Moto Z.

'Some people are going to be upset'

"I'm a little bit more toward the side that it's a mistake," Bob O'Donnell, chief analyst at Technalysis Research, told CBC.

"People have invested a lot of money in headphones … and now to use them you're going to have to plug them into that little dongle that everybody's going to lose."

"You do have the option of these wireless ear buds, but $160? And, oh by the way, they're tiny, so people are going to lose them. I'm not sure they look that great, but that's a judgment call that some other people might make, and it's not clear that they work with anything else," O'Donnell said.

"The bottom line is I have concerns, and I think some people are going to be upset about this lack of headphone issue," he said.

The iPhone is also getting an updated home button that will be more responsive to the touch and will come with water and dust protection.

Camera improvements include a new flash with four rather than two shades of colour to match ambient light.

Plus, the larger iPhone 7 has a dual-lens system on the back, giving it optical zoom technology a little more like that found in stand-alone digital cameras.

A free software update later this year on the more expensive model will add a portrait mode that gives the image a reduced depth-of-field effect, with the background out of focus.

"The changes are incremental," said O'Donnell. "And the innovations are not that dramatic." He said people who already have smartphones may not say, "Oh, I've got to have this device now."

Also announced today at the Apple event in San Francisco is that the company's newest smartwatch will come with GPS tracking for more accurate workouts. Although the first Apple Watch can tap the GPS on a companion phone, that means carrying the phone with you as you hike or run. GPS isn't common in smartwatches, though the upcoming Samsung Gear S3 will also get GPS.

The previous Apple Watch model is resistant to splashes, but not extensive use in water. 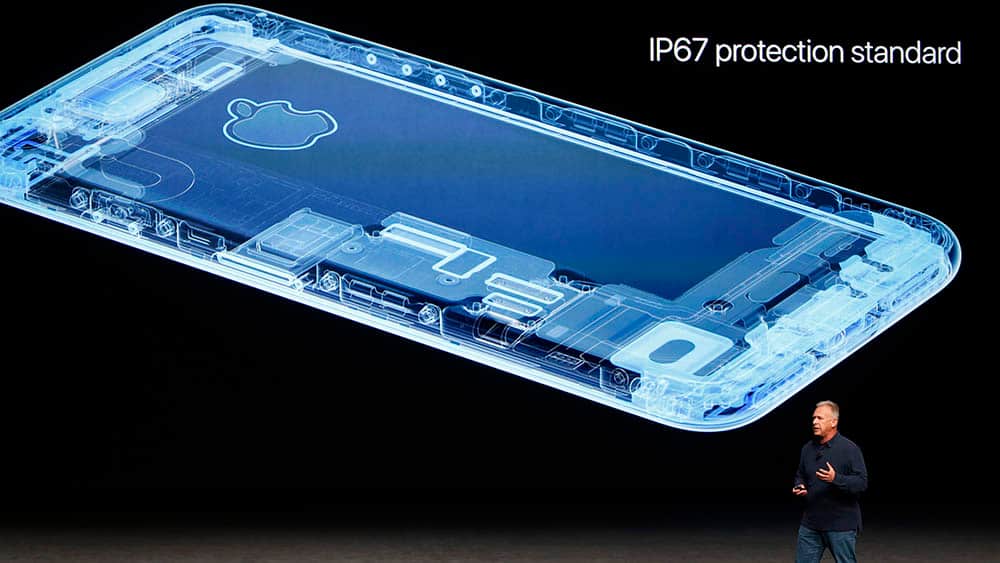 4 years ago
0:53
Apple's latest device offers protection against the elements 0:53

Apple says one of the engineering challenges has been sealing the speaker port, which needs air to work. The company said it designed the speaker to eject water after workouts. Fitbit has one swim-proof model and Garmin has a few, but the capability isn't common.

The original model is getting a price cut, to $269 US from $300 US, and will get a faster processor. The Series 2 Apple Watch will start at $369 US. The updates are coming Sept. 16. Existing watches can get new software on Sept. 13.

Those who aren't getting a new iPhone will still see improvements with a new mobile operating system called iOS 10. The software will add more intelligence to Apple services like Maps, Photos, the iPhone keyboard and Siri, the voice-activated digital assistant. There's a new Home app to control appliances.

In a big change for Apple, the company is also opening Siri and its iMessage service to work with apps created by independent developers. Siri will be able to send a message to a contact on LinkedIn, the professional social network being bought by Microsoft, or to a friend on WhatsApp, the Facebook-owned messaging service. Siri can also send money with the Square Cash service or search for pictures on Pinterest.

Apple is also allowing developers to build apps for iMessage, although the options so far appear to be mostly sending payments or ordering food. It's also adding bigger emoji and other visual effects for iMessage, including what it calls "Invisible Ink," which blurs an image in a message until a recipient swipes a finger across the screen.

Shigeru Miyamoto, described as the "Father of Mario" from Nintendo, said through a translator that Super Mario Run is designed to be played one-handed — while holding a handle on the subway, eating a hamburger or eating an apple.

Nintendo has long resisted bringing Mario to mobile phones, instead relying on the character to bolster demand for its own hand-held gaming systems.

Apple also announced that the popular Pokemon Go game would be available on the latest version of the Apple Watch.

Unlike Pokemon Go, Super Mario Run will not be a free-to-play app, though it will also include in-app purchases. It will be available on the App Store this holiday.

The event started with video showing TV host James Corden driving to the event and bantering with Cook about how he ought to wear a suit made of apples.​

Attempts at being inclusive

Apple made sure to include women and underrepresented minorities on stage — something that many tech companies, including Apple, have been criticized for missing at past events.

Sony, famously, held a PlayStation event in 2013 that did not have any women on stage. While the company was widely derided for this, others were quick to point out that other companies did the same, and that without many women and minorities in the companies' executive ranks, it can be difficult to represent them during big events.

For those keeping count, there were three women and four non-white people on stage at Apple's extravaganza on Wednesday. These included Mario creator Shigeru Miyamoto from Japan, who works for Nintendo and Trevor Edwards, the president of the Nike Brand, who also does not work for Apple. Many of the photos illustrating the iPhone 7's new souped-up camera featured minorities as well.