Electric vehicles are approaching a tipping point — here's why

Advances by manufacturers are bringing the latest crop of electric-powered vehicles to the point where they're starting to overcome the four main reasons Canadians say they're wary of going electric.

Canadians are buying electric vehicles like never before, with a near doubling of sales in 2018 over the previous year. But while one in 11 new cars now being sold is considered an EV, Canadians lean heavily toward electric-gas hybrids and remain reluctant to buy electric-only options.

With the upcoming crop of improved electric vehicles, however, the market could be poised for a shift.

"It's a no-brainer," says Arthur Potts, an EV proponent and renewable energy consultant. "They're a little more expensive, but I think with the cost-benefit, you're nuts to buy an internal combustion engine if you're driving around the city."

Indeed, electric-only EVs seem built for urban and suburban commuters. More than 11 million Canadians drive to work or a transit hub every weekday. That commute, on average, is 23 kilometres each way — easily within the range of most plug-in, all-electric vehicles currently on the market.

So why are many drivers reluctant to give up gas?

There's good reason for some of the consumer wariness, particularly on longer trips. A CBC News crew recently drove an entry-level electric vehicle on a 400 km trip from Toronto to the Detroit auto show as a test, and even with careful planning, they ran into difficulties.

Cold weather affecting the batteries, along with a simple missed highway turnoff, forced a major revision to the planned route so that there would be enough power to make it between charging stations. And an unexpectedly slow station threw the trip completely off schedule.

WATCH | Will they make it to Detroit on time? David Common puts an EV to the test. 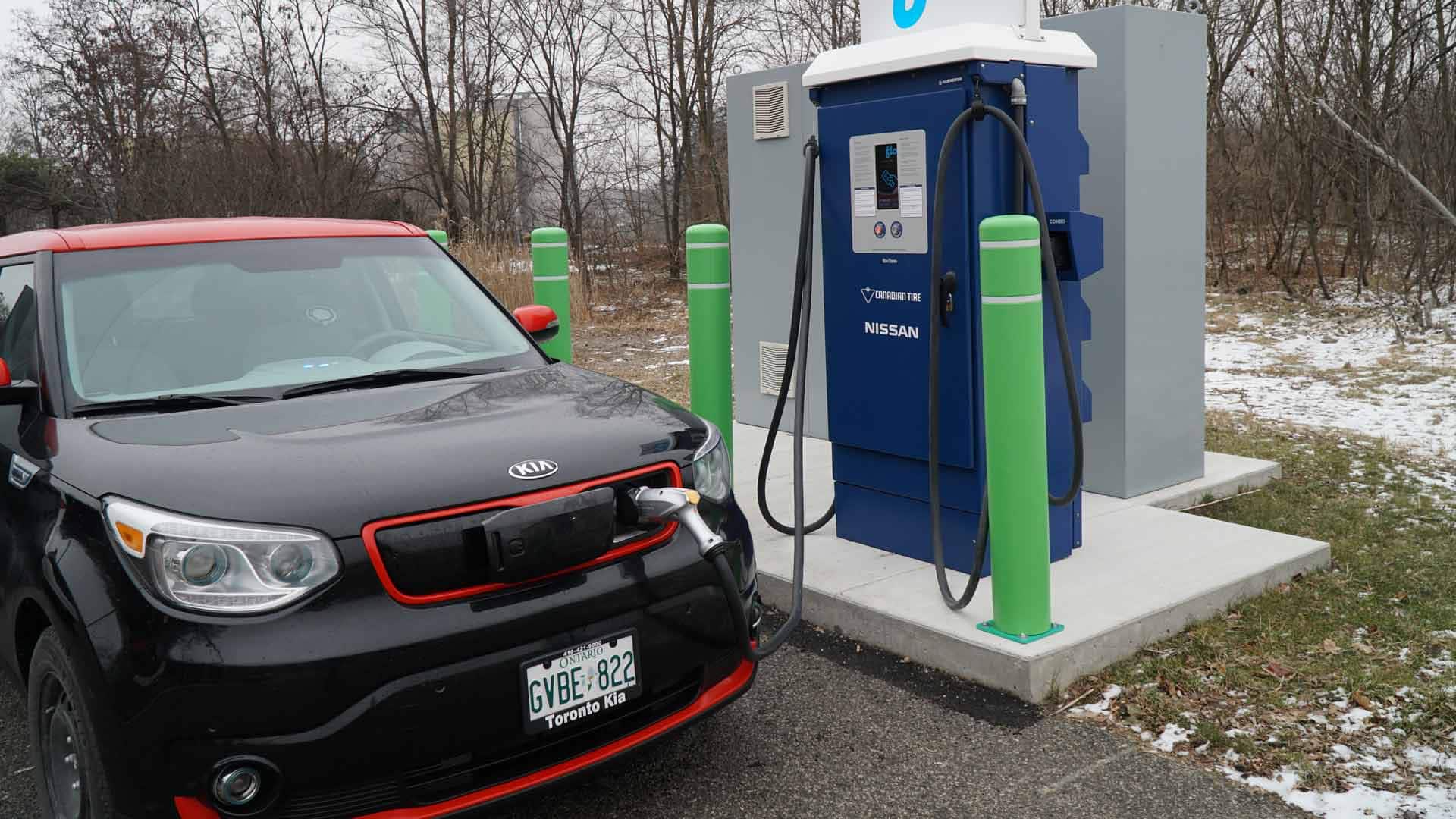 Are electric vehicles ready for the mainstream in Canada?

2 years agoVideo
10:16
Last year was a banner year for electric vehicles in Canada. Almost 35,000 sold in the first three quarters alone. But barriers to entry still exist for most, which has many Canadians opting for traditional vehicles instead. David Common and a CBC News crew decided to test one out and push its limits to find out how much further electric has to go here at home. 10:16

Besides a much later-than-expected arrival, it was a nail-biter for the crew as they nursed the EV to their destination in Detroit with barely any power to spare. They had to shut down all the "unnecessary" electrical systems in the car — including the heater and windshield defroster, even though the temperatures were a frigid -20 C.

Batteries "like to be treated as people," says Timothy Grewe, the head of GM's electric propulsion division. The lithium-ion cells powering electric vehicles function best at 21 C, and their performance falls along with the temperature.

The most-popular all-electric vehicle in Canada, the Tesla Model 3, has a far greater range than the entry-level Kia Soul EV used by the CBC team. Any Tesla model would have made the same trip (with heat) and only one stop to recharge. But Teslas are priced beyond the reach of many Canadians looking for a new car, and today's cheaper EVs tend to have less range.

However, with several automakers putting a new focus on EV research and development, and some vowing to have all-electric lines soon, the technology is quickly improving.

According to several manufacturers, new 2020 models are expected to have two to three times the range of the 2018 model year. The newest Kia Soul EV, the next iteration of the electric car used by the CBC crew on its road trip, for example, will have a much-increased range of around 350 km.

As more manufacturers lower their prices and extend their battery range, it could prove to be a tipping point for the EV market.

While the up-front purchase cost of an EV is much higher than a gasoline-engine vehicle, the savings on gas is around $3,000 to $5,000 a year for an average driver, according to Potts, the renewable energy consultant.

That means the lower per-kilometre operating costs of EVs can already balance out the difference in the purchase price over the course of several years of driving, and that period will diminish as purchase prices drop.

And while greater peace of mind comes with the extended range of the latest models, new batteries packing more power can mean even more savings for EV owners. That's because with more range comes even less need to have to recharge when people are away from home.

High-speed public charging stations are able to top up an EV's cells to near-peak in a little over half an hour, but can cost around $10 per 100 km. Home chargers tend to be slower, but most vehicles are idle overnight so longer charging times aren't a big issue, and they cost about $2 to $3 per 100 km.

Simon Ouellette of ChargeHub, which produces EV-related apps and information, says we're now at the point where the majority of EV drivers, particularly those with longer-range vehicles, don't need to use a charging station on the road unless they're on a very long trip.

"The reality is that's not something that happens on a daily or weekly basis for most people, you don't often charge in public.

"Charging your electric car is similar to sleeping in a bed," he adds. "Most of the time you sleep at home … same with an electric car, you don't think about it."

At the same time, for those who do make longer road trips or who forget to plug in overnight, the network of public places where EVs can recharge is expanding steadily. Tim Horton's coffee shops, malls and community centres increasingly offer electric vehicle charging stations, and thousands now exist across Canada.

And even as batteries get bigger, higher-speed chargers are being developed to keep pace. The newest can recharge a car in just a few more minutes than it takes to fill a tank with gas.

"The new charging stations will be faster," says Paul Raszewski of the Toronto Electric Vehicle Association. "You'd be stopping for 10 minutes [to fully charge an EV]. When? They are already being installed in North America — as early as this year, 32 across Canada. Not enough, but a good start."

However, there are still a few challenges that will continue to make themselves felt among certain groups of potential buyers even with the improved EV models promised by manufacturers, according to Ouellette.

Electric vehicles tend to come with a slower Level 1 charger for the home, also known as a trickle charger (Tesla chargers run on a completely different system). If you can park your car at 6 p.m. and leave the next morning at 8 a.m., you'll be fully charged even with a bigger battery. No special wiring is needed, as it plugs into a regular outlet.

People who want a faster Level 2 system that can recharge a vehicle in three to four hours, however, will need to shell out for professional installation of a heavy-duty outlet. (The fastest chargers, Level 3, are primarily used in public areas, designed for quick stops on those long road trips.)

Another issue is that not everyone who wants to recharge at home will necessarily have that choice.

Some urban homes don't have parking spaces at all, and retrofitting apartment buildings with chargers for outdoor or underground parking can be a problem.

"Where it's complicated is for people in condos, because you don't control what goes on in the parking garages," Ouellette says.

He adds that the federal government is looking at how to ease the barriers to EVs in places like condo parking lots.

And the greatest challenge to an EV's range in Canada is quintessential to our geography itself: The cold. Battery technology is steadily improving, however, and the bigger batteries promised by manufacturers will help soften the blow of a cold snap to an electric vehicle's range.

Meanwhile, the trend towards electric transportation is already on the upswing. Canadians bought three times more electric-only vehicles in 2018 than in the previous three years combined.