NASA's TESS spacecraft has been launched atop a SpaceX Falcon 9 rocket to begin a two-year mission to find, and then study, faraway planets and about half a million stars.

2-year mission begins to study planets outside our solar system

A NASA spacecraft has been launched on a two-year mission to find faraway planets and about half a million stars.

A SpaceX Falcon rocket blasted off on Wednesday evening from Cape Canaveral in Florida, carrying the Transiting Exoplanet Survey Satellite (TESS), after a delay from Monday.

TESS is the next generation of exoplanet-hunting tools, with the ultimate goal of finding worlds out among the stars.

Monday's launch was scrubbed just two hours before liftoff due to issues with the guidance navigation and control. The new launch was carried out as scheduled at 6:51 p.m. ET Wednesday.

Just minutes after the launch, the main-stage rocket booster returned to Earth, landing on a floating platform in the Atlantic, just off the Florida coast.

SpaceX plans to use the recovered booster for NASA's next grocery run to the International Space Station. It is the 24th booster landing for SpaceX, which aims to reduce launch costs by reusing rocket parts.

Scientists involved in the TESS mission are keen on expanding their database of exoplanets, which to date number more than 3,700 confirmed. Of those, 50 are believed to be potentially habitable. There are a an additional 4,500 strong contenders for exoplanets.

Most of the exoplanets have been discovered by the Kepler space telescope, launched in 2009. In 2013, Kepler had to modify its mission after two reaction wheels — used to point the telescope — failed. However, it did continue in its exoplanet hunt. The spacecraft is nearing the end of its mission, as fuel is running out. 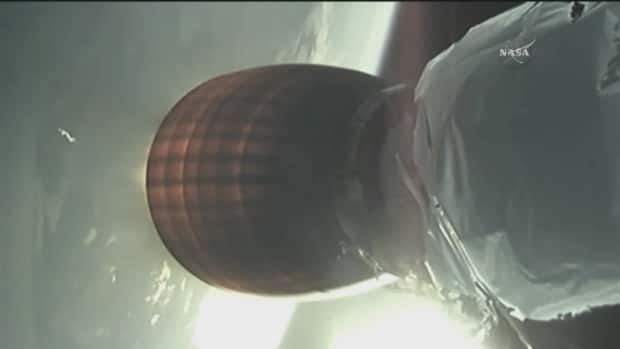 Kepler's exoplanets have been found through observing transits, when a star's light is dimmed slightly as a planet passes in front of it. TESS will observe in the same manner.

Most of the Kepler-identified planets are so far away that it would take monster-size telescopes to examine them more. So astronomers want to focus on stars that are vastly brighter and closer to home — close enough for NASA's upcoming James Webb Space Telescope to scrutinize the atmospheres of planets lurking in their sun's shadows. Powerful ground telescopes also will join in the detailed observations, as well as enormous observatories still on the drawing board.

TESS's four cameras will zoom in on red dwarf stars in our cosmic backyard — an average 10 times closer than the Kepler-observed stars. The majority of stars in the TESS survey will be 300 light-years to 500 light-years away, according to Ricker. (A light-year is about nine trillion kilometres.)

MIT's Sara Seager, a Canadian astrophysicist who has dedicated her life to finding another Earth, imagines water worlds waiting to be explored. Perhaps hot super-Earths with lakes of liquid lava. Maybe even rocky or icy planets with thin atmospheres reminiscent of Earth.

"It's not Interstellar or Arrival. Not yet, anyway," she said, referring to the recent hit science-fiction films.