NASA has announced the discovery of a new planet outside our solar system that it describes as the "closest twin" to Earth found to date. 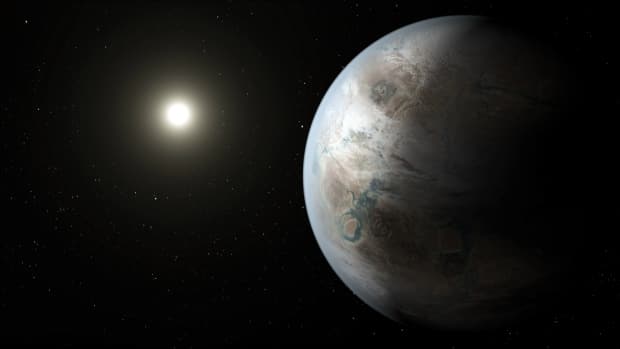 NASA has announced the discovery of a new planet outside our solar system that it describes as the "closest twin" to Earth found to date.

Kepler 452b, discovered using the planet-hunting Kepler Space Telescope, is about 60 per cent larger than Earth, making it a type of planet called a super-Earth, but scientists think it likely to be rocky, NASA researchers said at a news conference today.

It orbits a star similar to our sun at a distance similar to the distance between the Earth and the sun.

John Grunsfeld, associate administrator for NASA's science mission directorate in Washington, said the planet appears to be the "closest twin, so to speak, to Earth … that we've found so far."

However, he said it's more like a "close cousin" than an exact twin because of its larger size, which would give it five times the mass of the Earth and double the gravity. But it's less than twice the diameter of Earth, which means it's likely to have a rocky surface. Planets larger than that are not solid, but gassy, like Jupiter.

That's substantial opportunity for life to arise, should all the necessary ingredients and conditions for life exist on this planet.- Jon Jenkins, NASA

The star it orbits is the first G2 star — similar to our sun — ever found with a small planet in its habitable zone.

"That's substantial opportunity for life to arise, should all the necessary ingredients and conditions for life exist on this planet," Jenkins said.

The planet is about 1,400 light years away in the constellation Cygnus.

Because Kepler 452b orbits at an Earth-like distance from a sun-like star, the amount of sunshine it gets is expected to be similar to that on Earth, said Jenkins.

"It would feel a lot like home," he added.

The findings have been accepted for publication in the Astrophysical Journal.

Astronomers have been keen to find rocky planets in the "Goldilocks" or "habitable" zones of their stars – the region in which the temperature is right for liquid water, and therefore life as we know it, to exist. If there are a lot of them, as this and other recent discoveries suggest, the chances are very good that there is other life in the universe besides us.

About a dozen such planets have been found, but most have been larger and less Earth-like, and orbit cooler, fainter stars than the sun. Many also orbit near the edges of their star's habitable zone, where average temperatures would be quite hot or cold compared to Earth.

In addition to Kepler 452b, the Kepler team also announced the discovery of 521 more potential exoplanets, bringing the total number detected to date to 4,696, including 1,030 that have been confirmed.

Those include 12 that appear to have diameters less than twice that of Earth and orbit in the habitable zones of their stars. Nine of those stars are similar in size and temperature to the sun. Further measurements are needed to confirm those observations.

Kepler was launched in 2009 and specifically designed to hunt for planets around distant stars. It looks for a slight dimming in the light from a star as the planet passes in front of it, blocking part of the light. So far, it has found more than 3,000 planet candidates and confirmed more than 1,000 planets.

By May 2013, two of the wheels used to point the telescope at specific places in the sky had stopped working, severely handicapping its hunt for new planets.

That hasn't ended the announcement of new planets discovered by the telescope, though, as the data collected earlier is still being analyzed.

Kepler is now collecting other kinds of data to help astronomers understand other aspects of astrophysics, such as how planets formed.

In the meantime, NASA is preparing to launch Kepler's successor, the Transiting Exoplanet Survey Satellite, in 2017.