Why living in space may require more than new technology

Though technology has certainly brought living in space closer to becoming a reality, there is one ongoing challenge that stands in the way of conquering space: the human body.

From changing eyesight to an increased risk of cancer, human bodies face numerous challenges in space

We see it in science fiction movies all the time: humans settling on Mars or venturing into the far reaches of space. Though technology has certainly brought the fiction closer to becoming reality, one ongoing challenge stands in the way of conquering space: the human body.

The human body was built for life on Earth. Put us into space under microgravity and it reacts in unpleasant ways.

As they soar into space, many astronauts experience nausea and even vomiting — not exactly a stellar start. When they return, they can experience blurred vision, headaches, muscle atrophy, weak bones and possibly even lung cancer from galactic cosmic radiation — the equivalent of 10 chest X-rays a day.

Astronauts already face an increased risk of lung cancer due to radiation exposure. A recent study predicts that the cancer risk for astronauts voyaging to Mars will double.

"The biggest change [while living on the space station] is exposure to radiation. So that is increased by 100-fold compared to what we are exposed to here on Earth," said Raffi Kuyumjian, flight surgeon for the Canadian Space Agency. He worked with Chris Hadfield, before, during and after his five-month stint on the International Space Station from December 2012 to May 2013.

"The radiation exposure beyond low-Earth orbit is even higher...it'll be in the order of 1,000 times higher."

While no astronauts who have lived aboard the space station have reported having cancer, it may still be too early to tell.

"This may be something that shows up 10 to 15 years in time, once we have a bit of time behind missions and astronauts have grown a little bit older," Kuyumjian said.

NASA is looking at ways of creating better shielding to block out the radiation, but so far, there is no definitive fix.

If there's anyone who can tell you about the challenges of living in space, it's Scott Kelly. He spent 340 days in space together with Russian cosmonaut Mikhail Kornienko as part of the One-Year Mission to study the effects of long-duration spaceflight.

He was also part of NASA "Twin Study" that compared his physical changes to that of his former astronaut twin brother Mark, who remained on Earth.

In his new book Endurance, he talks about his first few days back on Earth and how difficult it was for his body to readjust. His legs swelled. He had headaches. His skin burned.

But that wasn't the biggest challenge — that came while orbiting 400 kilometres above Earth.

"The hardest part for me was dealing with this idea that if something happened to my family on Earth, I couldn't come home," Kelly told CBC News.

"It's not the personal risk...it was this idea that you kinda feel helpless."

And he knows all about helplessness. In 2011, his sister-in-law, congresswoman Gabrielle Giffords, was shot in Arizona. Kelly was aboard the International Space Station with two months left in his mission at the time. 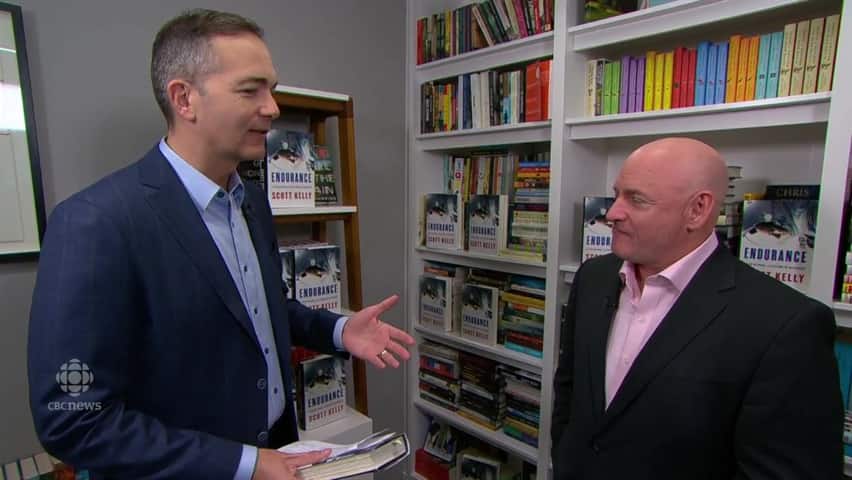 3 years ago
3:02
Scott Kelly was in Toronto for a sit-down with Canadian astronaut Dr. Dave Williams at the Ontario Science Centre to talk about his time in space, what sparked his dream, and what's next for spaceflight. CBC Toronto's Mike Wise caught up with him ahead of his appearance. 3:02

Space flight surgeons and space agencies are acutely aware of the the psychological challenges space poses — and that's just with an average of six months on a space station. If humans are to go to Mars, they'll likely be away from loved ones for nearly two years at the least.

"We're trying to look at how this will affect the isolation aspect," Kuyumjian said.

Then there's the lack of natural sunlight, which can affect moods.

NASA is in the midst of retrofitting the ISS with light bulbs that change in frequency, with the "day" light mimicking natural light, with less blue light that can disrupt circadian rhythms. Astronauts must also take vitamin D supplements.

Another change that's been noted since about 2011 is changes to astronauts' eyesight. Some had to wear glasses after returning to Earth.

Doctors noticed that the back of the eye was flattened, as though there's extra pressure in the brain that changes the geometry of the eye and focal point.

Then there are muscle atrophy and changes in bone structure that can accompany time in space.

Astronauts lose bone density and the very structure of their bones changes under microgravity.

Human bones have evolved to fight against gravity. As astronauts exercise in space (to combat muscle atrophy, or the wasting of muscle), bone can reform. But without gravity, there is no longer a need for them to form in the same manner as on Earth.

That could lead to weaker bones and the inability to avoid fractures or heal quickly.

Kelly said that the longer you spend in space the more accustomed you became to the various changes. But it never felt perfect.

"You always feel a little bit better the longer you're there, but I never — even after 340 days — felt completely normal," he said.

Living in space means scientists and doctors are going to have to work together to develop novel ways of protecting or fixing our fragile bodies. But Kelly is optimistic.