What insects can teach us about surviving the bitter Canadian winter

Understanding how insects survive temperatures well below freezing is not just fascinating but could eventually have useful applications, such as lengthening the storage time for organs used in transplantation, says biologist Brent Sinclair. 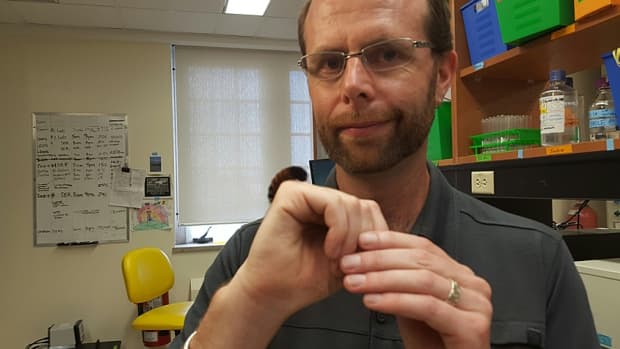 5 years ago
2:02
Scientists are trying to figure out how many insects freeze and come back to life in the spring 2:02

Understanding how some insects survive temperatures well below freezing has fascinated biologist Brent Sinclair for more than 20 years.

The biology professor at Western University in London, Ont., has been trying to understand how insects such as woolly bear caterpillars and gold flies accomplish the feat of freezing and coming back to life in the spring.

Even some tropical bugs in the high mountains can survive freezing, he says.

So why do we get frostbite and insects don't? Part of the answer lies in the manner in which insects become frozen.

What the insect has done is that it's turned a freezing problem into a dehydration problem.- Brent Sinclair , biologist

"What happens is ice starts to form in the insect's blood, and when that ice forms, all of the sugars and things get squeezed out," Sinclair said in an interview with CBC News. "That makes the blood more concentrated, and that actually pulls water out of the cells. The cells are drying out, effectively. So, what the insect has done is that it's turned a freezing problem into a dehydration problem."

Terrestrial insects excel at dealing with dehydration, he said.

When an insect is then warmed, it rehydrates, and it appears to rise from the dead.

"You can tap it, and it's frozen. Then after half an hour, it will walk off."

Sinclair's lab is exploring some practical applications of what they've learned about insects and freezing, such as improved storage of donated organs that wouldn't require them having to be rushed to recipients.