'We come from the stars': How Indigenous peoples are taking back astronomy

Some people fear that much of the Indigenous contribution to astronomy has been lost, but it's seeing a resurgence.

Astronomers turn to teaching Indigenous star stories from around the world

It's just after dusk on a cool August night in Wood Buffalo Park in Alberta, roughly 50 kilometres southwest of Fort Smith, N.W.T. For two days and nights, clouds and cool weather have hampered the group of astronomy enthusiasts hoping to enjoy the dark skies and perhaps even catch a display of the northern lights.

It's the final day of the Thebacha and Wood Buffalo Astronomical Society's Dark-Sky Festival. and, as if the sky takes pity on the group — made up of amateur astronomers and families with young children — the clouds begin to break up as the sun sets. But there's one streak that remains in the dark blue sky.

"Keep an eye out," says Roland Dechesne, a guest speaker and member of the Royal Astronomical Society of Canada. "Could be aurora."

Salt River First Nation elder Paul Boucher, who is standing nearby, looks skyward. "What? That?" he says. "Yeah. That's the northern lights."

The northern lights, or aurora borealis, are a familiar sight in northern skies. But those dancing lights mean much more in many Indigenous cultures.

The recognition of First Nations contributions to science has been on the rise in recent years. In astronomy, instead of teaching constellations and stories from the Greeks and Romans, many Indigenous people are turning to teaching the star stories of the people who have lived on this land for thousands of years.

For the Cree (Salt River First Nation is made up of Cree and Chipewyan) the sight of the dancing lights means spirits are dancing across the sky.

"In the wintertime, when these lights were in the sky most prominently, there was a connection, a connection to alternate realities, to the spirit world," Wilfred Buck, a science facilitator at the Manitoba First Nations Education Resource Centre (MFNERC) says of the northern lights. "And that connection was strong."

Buck, from Opaskwayak Cree Nation, has a goal: to teach science from an Indigenous perspective, something that he's been doing for 14 years. He's a hard man to pin down; for many days of the year, he is travelling, often with his portable planetarium.

When he took the position at MFNERC, he wanted to teach First Nations in science. In an effort to determine the best way to do this, he reached out to the elders who told him he had two ways he could approach it: he could teach it from a Western system and infuse First Nations' culture into the subject areas or he could do it the opposite way. He opted for the latter.

"The students have to understand … they've been educated and told and colonized to think that our people were savages in a bush and surviving and we didn't know anything," Buck said. "That's not true."

Buck's interest in the stars began when he was about five years old.

"I remember sitting on the banks of the river and looking up at that night sky, and wondering … what's out there and where our place is in it," he says.

And then it dawned on him: the skies were heavily embedded in his culture.

Like Buck, Hilding Neilson wanted to bring Indigenous astronomy to the public. Neilson, who is Mi'kmaw from the Qalipu First Nation in Newfoundland and Labrador, is an assistant professor in the University of Toronto's department of astronomy and astrophysics. He teaches Indigenous astronomy in his courses.

Buck says most people don't realize First Nations people had a deep understanding of the sky and even pondered such topics such as cosmology and quantum physics.

One example is the star cluster called the Pleiades or, in Western culture the Seven Sisters. The Cree referred to it as the "hole in the sky."

See an elder explain the Cree traditions around the winter solstice: 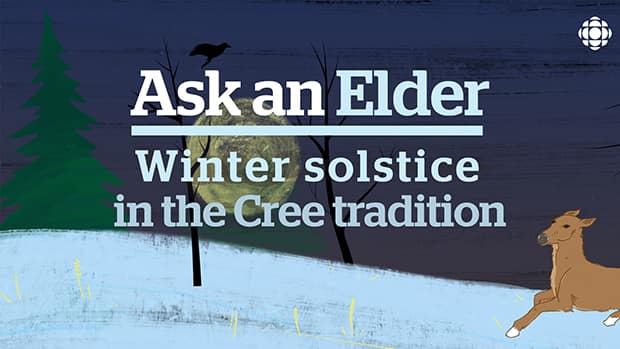 What does the winter solstice mean in the Cree tradition?

3 years ago
1:00
Elder Wilfred Buck explains how the Cree observe the shortest day and the longest night of the year. 1:00

And it's time that astronomers and scientists considered Indigenous contributions and their worth, Buck says.

"All these ceremonies and all these so-called mythologies … there's a depth of knowledge involved. They're not just quaint little stories. … Every Indigenous culture in the world has that depth of knowledge, that intellectual capacity," he says. "It's just that through the colonial process it's been minimized and it's been marginalized."

Neilson says many of the stories have been lost, but he's happy to see renewed interest in not only telling the stories, but respecting what they have to offer. The worry is that much of it may have already been lost.

"Like every aspect of Indigenous knowledge, we know we have to be very worried about what has been lost and what is unavailable," Neilson says. "And who knows if we'll ever get it all back? But preserving it is a big, important part of all this."

It's important that no one underestimates the importance stars play in the daily lives of Indigenous people from around the world, Buck says.

"Stars are part of our lives," Buck says. "Every night they're out there and my people believe we come from the stars."