How Chris Hadfield turned earthlings on to space

Chris Hadfield has returned from the International Space Station, bringing with him hopes that the strong new links he forged with earthlings - including more than 887,000 Twitter followers - will help ensure a stronger future for Canada in space. 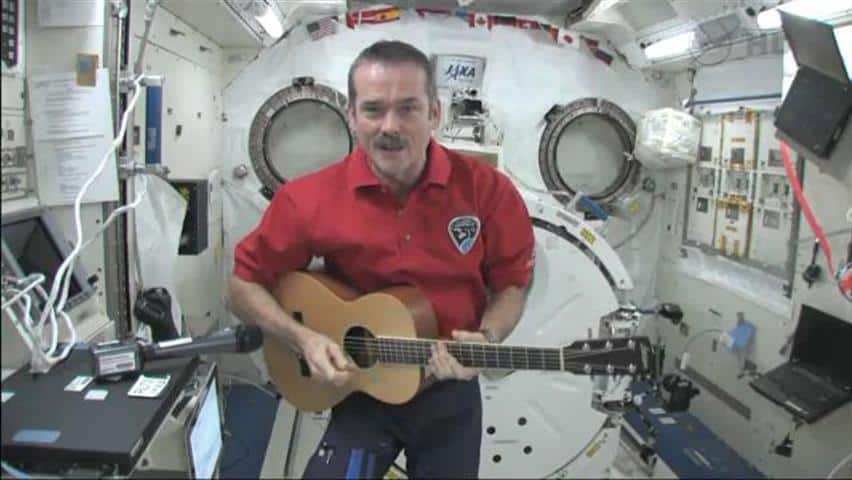 8 years ago
2:15
Astronaut connects with Canadians from space 2:15

When Chris Hadfield and his family began talking three years ago about how to give Canadians a behind-the-scenes look at his next spaceflight, they came up with some ideas that would forge an unprecedented everyman link between life on Earth and his stint on the International Space Station.

That bond, which resulted in, among other things, more than 887,000 followers all over the globe keeping up with Hadfield on Twitter, ended — in some ways — on Monday.

Hadfield, the first Canadian to command the ISS, and two other astronauts strapped tightly inside a Soyuz spacecraft landed on the flat steppes of Kazakhstan at 10:31 p.m. ET.

But for Hadfield and the Canadian Space Agency there is hope that the unique way the charismatic 53-year-old was able to connect with people on Earth will be more than a curiosity that lingers on through the tweets, videos and pictures, which showed him doing everything from playing his guitar to testing his blood.

Instead, they hope, the interest that Hadfield has roused over the past five months will help forge a stronger role for Canada in space at a time when that future is anything but certain.

Hadfield's son Evan, 27, who is currently serving as his father's unpaid social media manager, says several factors went into wanting to find a way to make a connection with Canadians during the ISS mission.

"It's many things, but it all boils down to generating interest," Evan Hadfield said in an interview from his current home in Germany.

"You want people to be interested in the space program. And in a democracy like Canada, if you want a program to continue, the best way … is to get people interested in it."

The goal, Evan says, has been to open eyes, not to give people answers, but to give them a chance to see and think for themselves with the information his father has been providing.

Three years ago, and long before Hadfield's ISS mission was on the radar for most Canadians, his family was chatting over dinner about the best way he could interact directly with people during his next spaceflight.

"My brother brought up Twitter and after a little work I put it all together for Dad and sort of taught Dad how to use it. And then after a few years he sort of slowly taught himself," Evan said.

Chris Hadfield isn't the first or only tweeting astronaut, but he has, in layman's terms, tweeted up a storm. When he left Earth on Dec. 19, he had 20,000 Twitter followers, a number that has grown to more than 824,000 today. Followers come from around the world, and have been particularly intrigued by his much-praised photos of places on the globe.

Eighty-one videos of his ISS experiences have proved an unexpected hit for the Canadian Space Agency, generating 22 million views. Website traffic at the CSA is up 70 per cent so far this year over the same period in 2012.

The unexpected surge in interest prompted changes at the CSA, including adding more people to the team to handle media requests, which were flooding in from around the world.

"Our biggest surprise was the international response that we got with everything we did," says Simard, noting calls places such as New Zealand, Australia and Brazil.

For observers, the interest Hadfield has generated is remarkable.

"He has been a phenomenon, and I mean that in the most positive sense," says Marc Garneau, Canada's first astronaut who later led the CSA and is now a Liberal MP.

"Not only was he setting a new precedent for Canada in becoming the first ever Canadian commander of the International Space Station … but in addition to that of course he has been a remarkably effective communicator to the ground."

Garneau says Hadfield "brought the space station and to some extent the space experience to a large number of people by sharing not only his pictures on Twitter and his comments, but also by sharing his emotions and that's something that people really want to hear about."

Hadfield's ability to communicate his experiences, observers say, is significant, particularly because Canadians don't know much about Canada's role in space exploration or how important space is in their lives.

"Space is something that has a lot of significance for Canada in particular," says John Moores, an assistant professor of space engineering at York Univesity.

Space, he says, is vital for the role it plays in everything from communication via satellite in a country with such a large land mass to weather forecasting and monitoring resources, or plotting what happens in the Arctic as conditions change over time.

"We often forget the extent to which space comes into our daily lives."

At the same time, many in the Canadian space community consider the public lacks awareness of what Canada has done in space since its first satellite was launched in 1962.

"More people in Canada know about NASA than they do about the Canadian Space Agency and the Canadian space program," says Gordon Osinski, deputy director of the Centre for Planetary Science and Exploration at Western University in London, Ont.

"One of things I don't think has been done well in the past is going out there and promoting what Canadians and Canadian researchers are doing in space."

Hadfield has, Osinski suggests, singlehandedly raised the profile of the Canadian space program, and he hopes the momentum the astronaut has established will continue.

Still, questions remain about the long-term impact Hadfield can have.

"As much as he's captured the attention of Canada and the media for this, unfortunately I don't think that there is anywhere else for this to go. There's nothing else out there."

"Unfortunately the space agency is dwindling. Its budgets are being cut. Its people are leaving as a mass exodus in some instances," says Fricker.

Dad's on the line

Evan Hadfield was part-way through a video link interview from Germany when his cellphone rang.

"I'm sorry, I have to take this," he told me, putting the interview on hold before answering.

"Good," said Evan. "I'm currently in the middle of an interview. Can this wait?"

Apparently it could, at least for a little while.

"Sorry," Evan said, as we picked up where we left off.

A review commissioned by the federal government found late last year that Canada's space industry has been lacking direction and falling behind other countries for the past decade or so.

The federal government has said it is reviewing the recommendations by former federal cabinet minister David Emerson.

For its part, the CSA says it wants to build upon the interest and attention Hadfield has attracted.

"We do have other projects going on at the Canadian Space Agency and we've actually started thinking about how to transition from that success and trying to bring the same kind of strategy into our other projects," says Simard.

"Now that we see that the videos are really successful, we'll not drop that and we will try to continue to do videos but with other topics. It’s not going to be Chris Hadfield in space, but it's going to be other projects that the CSA is working on right now."

For the Hadfields — father and son — their popularity has been "amazing," and "stunning," Evan says.

The astronaut has no intention of ending his online connection once he's home, Evan says. Instead, he hopes to build upon it.

"A lot of people think that when he comes back he'll stop, but I don't really understand why because it's not an end to something," Evan says.

"It's going to be so much greater when he comes home and people can interact with him face to face now that they know what he's achieved and what it's possible to achieve."

Evan Hadfield looks to the future, and sees a need for Canada to "start deciding that we are going to continue being a good space nation.

"We need to stop resting on our laurels, and that includes Dad …

"There is a very strong desire to live in hindsight, to say we went to the moon as the United States [did], therefore we’ve succeeded in space, but it's exploration and exploration is not something you do one time and then stop.

"It's a continuous process and we need to support that because it's directly benefiting us here on Earth."