A food court in Toronto has cut the amount of garbage it produced from 120 bags a day to just three. Here’s how they did it, and what other fast food vendors, food courts and their customers can do to cut back on fast food waste.

Food court recyclables, compostables often end up in the garbage

The food court at Yorkdale Shopping Centre in Toronto used to generate 120 bags of garbage a day. Now it produces just three — despite the fact that it serves noodles, fried chicken, burgers and other fast foods to 24,000 customers a day.

Rather than having mounds of garbage, we have two totes.- Claire Santamaria ,  general manager ,  Yorkdale  Shopping Centre

"It actually just goes to show the type of waste that is here in the food collection or after you finish your meal — how much of that is actual garbage," said Claire Santamaria, the mall's general manager.

It's also proof there are ways shopping centres, vendors and customers can reduce the colossal amount of waste generated by fast food and food courts.

Since Yorkdale opened its new, greener third-floor food court in 2012, much of the waste has been reduced through the use of reusable plates and cutlery — the facility washes 75,000 dishes and 53,000 pieces of cutlery a week.

Customers can still opt for a takeout container instead of a plate, but even then the mall has a plan to prevent waste from ending up at the dump unnecessarily.

"We will make sure that what is recyclable is recycled and then what can be composted is composted," Santamaria said.

The most confusing things for customers, Santamaria says, is trying to find the garbage cans —  there are none.

All customers have to do is hand their fully loaded tray over, dirty dishes, takeout containers and all, and mall staff do the rest, separating waste and collecting the food scraps to be dehydrated.

"Because all the water is out of it, it is actually quite light. And rather than having mounds of garbage, we have two totes," Santamaria said.

Yorkdale is implementing a small part of the solution to a very big problem.

Fast food presents a particular problem. Canadians eat a huge amount of it — spending $248 million per month on "limited service eating places" in the first five months of 2018, or approximately 25 million fast-food meals, according to Statistics Canada.

In places like food courts, unclear signage, inconsistent recycling rules and hurried customers all add up: recyclable containers and compostable organic food scraps mostly end up in the garbage bin. That's one of the reasons businesses, institutions and industry send far more waste to the dump than households.

Sometimes it's the opposite problem: recycling bins contain too much "contamination," like non-recyclable plastic utensils, dirty napkins or just a little too much leftover food or sauce.

"Multiple items like this will contaminate an entire load, meaning that entire bin will be discarded as waste," says Anthony Cromie of Toronto-based waste auditing firm Waste Reduction. 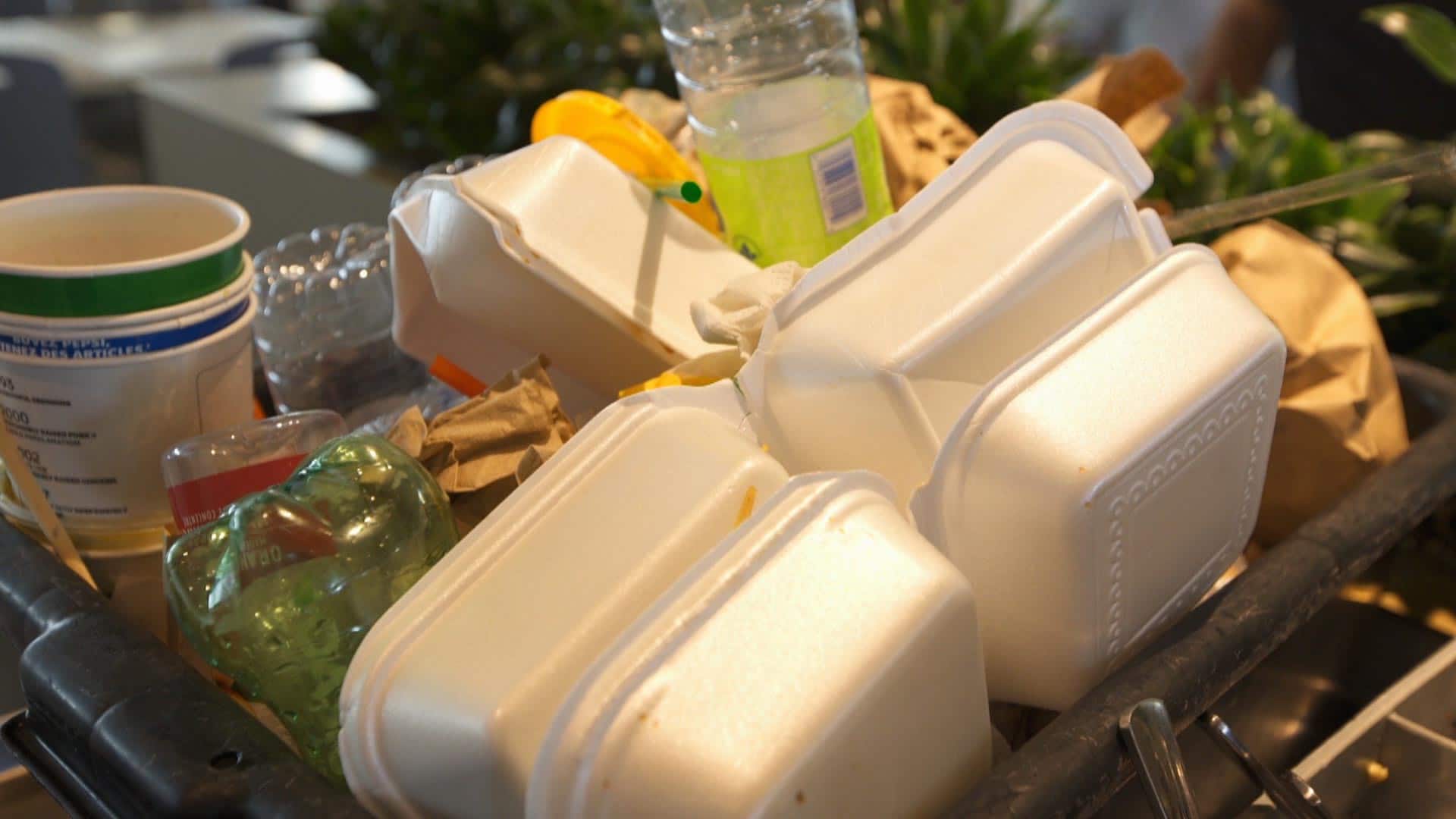 2 years agoVideo
3:04
Audits have found as little as 12 per cent of food court waste is recycled or composted. The biggest problem: consumers aren't sorting waste from recyclables. 3:04

He recommends taking a little extra time to separate everything, and scraping as much extra food as possible into the organics bin.

"The hardest part is there are no rinsing stations at a food court," he said. That means the types of containers that could be washed and recycled at home often end up in the trash at the mall.

Another complication is that many commercial sites don't accept the same types of items as residential recycling programs — Styrofoam, which households in Toronto can put in the blue bin, isn't recyclable in many food courts.

The good news is that far more food court waste is recyclable than you might think. Cromie and his team went through a load of garbage collected at a local food court by CBC News and found 86 per cent of the items in the "garbage" stream could actually have been recycled.

But how do you know if something is too contaminated to go in the recycling bin? Or what bin to put plastic items like cutlery in if they have confusing labels like "compostable"? (Hint: It's usually the garbage, not the organics bin.)

Tara Moreau, associate director of sustainability and community programs at the University of British Columbia Botanical Garden in Vancouver says the confusion can give people "analysis paralysis" and they just end up throwing everything in the garbage.

The garden holds an annual two-day apple festival in October that attracts 10,000 people​. Moreau used the event as a way to test different ways to encourage visitors to sort their waste into the proper recycling, composting and garbage bins.

What she found was that different kinds of signage meant to guide visitors, including a 3D display of the types of waste that went in each bin, had no significant impact.

People can reach a bit of analysis paralysis and just end up throwing it in the garbage.- Tara  Moreau , University of British Columbia Botanical Garden

But having a volunteer direct people which bin to put their trash in reduced the amount of contamination in the organics and recycling bins by 96 to 97 per cent, and the amount of recycling and organics in the garbage by 85 per cent.

She thinks generally the problem is people are in a hurry when they get to the bins.

"So having somebody there encourages them to take a bit more time … thinking about where their products or their waste would go."

But what about Yorkdale mall's approach — getting staff to sort everything instead? Moreau doesn't think that's ideal, as it hides waste out of sight and out of mind.

"I think bringing it to the forefront and having people see waste and understand that there's a lot of waste from our everyday activities will help us to think more about reducing waste when we're at the grocery store, when we're at an event."

She recommends that instead of fretting about recycling right when you're at the food court, you can pack a reusable mug, reusable cutlery or even a pair of chopsticks in your bag "so you always have these options available for use when you want to grab a bite on the go."