Far-right groups in North America are 'opportunistic' and are seeking ways to take advantage of the COVID-19 pandemic to spread hate and fear, say watchdogs who keep tabs on them.

Far-right groups across North America are seeking to take advantage of the COVID-19 pandemic by "weaponizing the virus" and spreading disinformation, according to researchers who monitor the groups closely.

In fact, some of those efforts are already being felt.

As a result of physical-distancing measures related to the coronavirus outbreak, many organizations have moved to video-conferencing apps like Zoom. The FBI has issued a warning about "Zoom-bombing," where online video meetings are hijacked by virtual intruders who post racist or pornographic content, yell hateful slurs or utter threats.

A New York Times report documented networks of accounts involved in coordinating Zoom attacks — including one group chat on Discord, a free chat app that also functions as a message board. That particular group had over 2,000 people.

A Jewish high school in Vancouver and the YWCA, which was hosting a 250-person virtual town hall, have reported having video meetings interrupted. A meeting of the Canadian Antisemitism Education Foundation was interrupted by a person who shouted, "Sieg Heil!" and rude and misogynistic comments were posted in the meeting's chat.

While it's not always clear who is behind these intrusions or their motivations, at least of some of the attacks have been linked to white supremacists or are being coordinated on platforms and channels favoured by the far right, like Discord and anonymous message boards.

"There's nothing the far right likes more ... than a crisis," said Barbara Perry, director of the Centre of Hate, Bias and Extremism at the University of Ontario Institute of Technology.

The Anti-Defamation League says that far right or extreme right movements "exist outside of and are more radical than mainstream conservatism," and can include anti-immigrant, anti-Semitic and anti-Muslim views.

Perry said she is currently seeing online activity that falls under three main categories: conspiracy theories, anti-immigrant and xenophobic attitudes and so-called accelerationist rhetoric. Accelerationism, as conceived by the far right, is the idea of hastening the collapse of society, which would lead to a race war from which a white ethno-state would emerge.

The conspiracy theories in this case often focus on the origin of the new coronavirus, insisting that it was created in a lab (it wasn't) and let loose by powers-that-be in order to profit somehow or control people.

"We saw ... as the conspiracy theories around COVID were really starting to emerge at the beginning of the year, suggestions that it had actually originated in a Canadian lab and was subsequently stolen by a Chinese person and brought back to China," said Jacob Davey, the far-right and hate crime lead for the Institute for Strategic Dialogue (ISD) in the U.K.

That particular conspiracy theory was based on a distortion of a CBC News report and has been debunked. 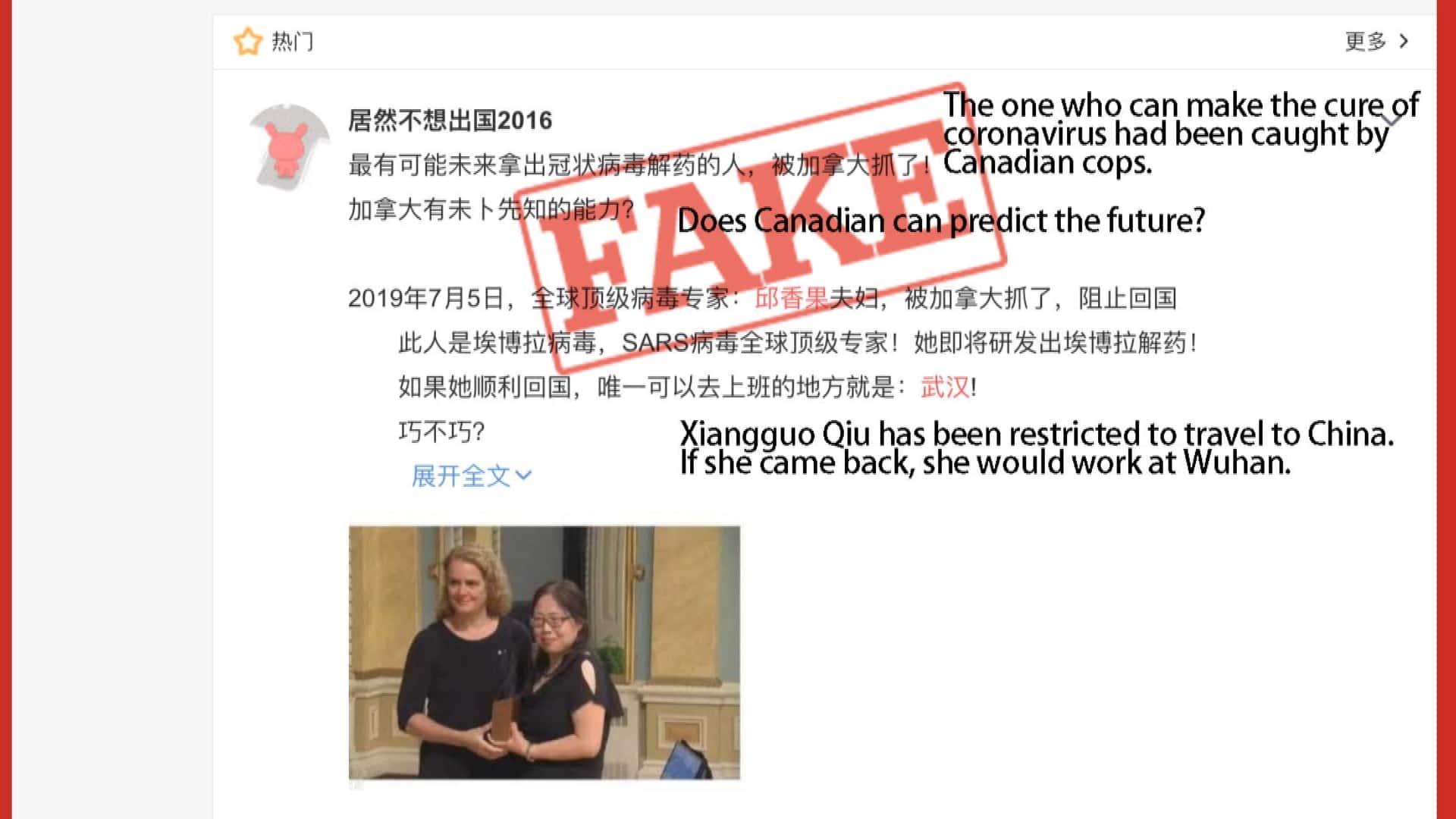 How this CBC story turned into a coronavirus conspiracy theory

9 months ago
4:42
A CBC News report was distorted to create a conspiracy theory circulating online, claiming that Chinese scientists stole the coronavirus from a Winnipeg lab. Here's how that false information spread. 4:42

Davey and Perry say anti-government themes are common in far-right groups, especially when it comes to Prime Minister Justin Trudeau.

"There's a lot of criticism and attacks on Justin Trudeau from the extreme right, suggesting that he's been instrumentalizing the crisis to gain more power or that he's doing very little — perhaps deliberately — to stop the spread of the disease," said Davey.

In March, the ISD noted in a briefing that the far right will use the pandemic to spread disinformation that targets migrants and refugees, among other vulnerable groups.

The ISD suggested this could include spreading rumours that immigrants and minority communities will use coronavirus lockdowns to riot, or that migrants are more likely to spread the virus.

"The extreme right are incredibly opportunistic," said Davey. "They will identify and seize upon any major event or crisis as an opportunity to disseminate hatred."

Perry also cited online posts blaming Asian-Canadians for the spread of the virus, as well as others stoking hatred against ethnic groups or encouraging attacks on vulnerable people.

"These sorts of narratives are ... no longer restricted to the far right, if they ever were," she said. "There's a bigger audience for folks for the far right now. So many of us are online. That's where we're living our lives right now. So we're so vulnerable, I think, to this sort of messaging."

Perry said people should not assume the rhetoric will stay online, or be limited to Zoom-bombing.

"I think it's a very realistic fear that we will see targeted violence."

The SITE Intelligence Group, a Maryland-based non-governmental organization that tracks violent extremists, issued a report at the end of March warning of the ways the far right seeks to capitalize on the ongoing pandemic.

"The most worrying of the far right's coronavirus-related activity has been its swell of calls for attacks, many of which opportunistically see the current circumstances as helping attackers not get caught," wrote the group's director, Rita Katz.

SITE also detailed attempts to spread conspiracy theories or peddle disinformation that could harm the public or make them afraid or distrustful of authorities.

One example SITE highlighted is an online image of a poster mocked up to include the logos of the U.S. Centers for Disease Control and Prevention and the World Health Organization, and encouraging people who had COVID-19 to take public transit and visit "diverse neighbourhoods."

CSIS said it is aware of the situation.

"Given the extraordinary effect the COVID-19 pandemic has created on the lives of individuals across the world, CSIS is mindful that certain threat actors, across multiple threat landscapes, may seek to take advantage to advance their own interests," said John Townsend, the head of media relations for CSIS, in an email to CBC News.

"Canadians can rest assured that CSIS is aware of the unique conditions the COVID-19 pandemic potentially creates and is engaged to ensure we remain safe."

Last week, the FBI said it had disrupted a suspected plan by a 36-year-old man with white supremacist views to bomb a hospital treating COVID patients in Missouri. Authorities said he was motivated by racist, anti-government views and wanted to cause widespread harm. (According to the FBI, the man died during a shootout with law enforcement.)

Police in Canada have reported a small number of hate crimes linked to the ongoing pandemic. None of the police forces reporting this have linked them to far-right movements.

Calgary police have reported two hate crimes related to the coronavirus, and are currently investigating two more, according to Senior Cst. Craig Collins.

In a March 14 incident, a man called a Chinese restaurant and threatened to kill all Chinese people. In the second incident, a person posting on Facebook said he intended to contract both COVID-19 and Ebola and would visit the Tsuu'tina Nation in Alberta to spread the diseases to Indigenous people.

Collins said a white male in his early twenties has been charged in the second incident, with one count of uttering a threat.

"We see nothing currently that leads me to believe that either of these are connected to any far-right or extremist groups currently," Collins said.

Edmonton police reported two instances of hateful graffiti targeting Asian-Canadians, but specified it has been removed.

Winnipeg, Toronto, Montreal, Hamilton, Halifax, Peel police services and the Sûreté de Quebec all say they have not received any reports of hate-motivated attacks related to the coronavirus.

Andrea Bellemare is a reporter and producer with CBC News who currently focuses on disinformation, tech and privacy. She helped launch the new CBC Kitchener-Waterloo radio station in 2013, reported for CBC Montreal and produced radio docs for CBC Radio. She has also reported for the wire service Agence France-Presse.