FAQ: What do astronauts eat?

Food in space has come a long way, from dry cubes to hot casseroles, and there are several things to consider when feeding someone living in zero gravity. 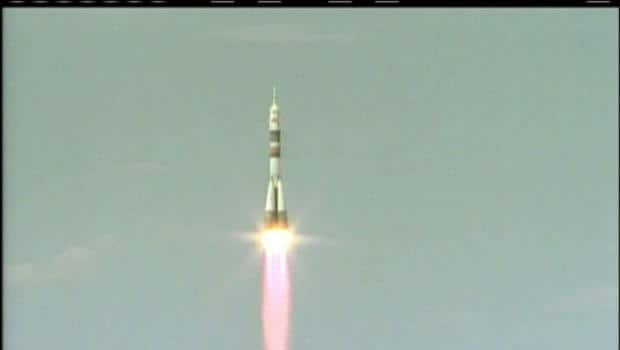 8 years ago
2:37
The Canadian Space Agency asked for astronaut food ideas. We look at some of the winning suggestions. 2:37

In the early days of the U.S. space program, astronauts had to contend with freeze-dried powders and small cubes of food as well as gel-like liquids packaged in aluminum tubes.

There wasn’t a lot of flavour or choice either but eventually, when packaging improved, freeze-dried food had an expanded repertoire which came to include shrimp cocktail, butterscotch pudding and applesauce.

By the time NASA began its Apollo program in the early 1960s, hot water became available on missions and the hungry astronauts were able to rehydrate food easier and eat from a "spoon bowl" – a plastic container which could be opened and eaten from.

Food pouches came on board in the 1970s and those lucky astronauts had a menu of 72 different food items.

Food in space has come a long way. There’s a lot to consider when feeding someone living in zero gravity.

How are foods chosen?

NASA has to consider a range of foods that would supply the person with 100 per cent of their daily value of vitamins and minerals.

Crew members need the same amount of calories in space as they would on Earth and most of their nutrient needs are also mostly the same – with the exception of the amounts needed for iron, Vitamin D and sodium.

Astronauts have fewer red blood cells while in space and iron from food goes into those cells. If they had foods high in iron, they would have health problems, so foods with minimal iron amounts are chosen.

Sodium and vitamin D affect bone. Too much salt can lead to bone loss, meanwhile astronauts lack vitamin D while in space — that's because we tend to get it when our skin is exposed to natural sunlight. Therefore, they require vitamin D supplements while on their trips.

With those things in mind, foods are selected to go into space after undergoing:

Do astronauts have a say?

Yes they do. In fact, Canadian astronaut Chris Hadfield put out a call to his countrymen for suggestions of Canadian food to take on board his next mission – six months on board the International Space Station from December to June 2013.

The astronauts are allowed to bring a selection of so-called "bonus foods" beyond the regular menu, provided it has a long shelf life and is appropriate for space travel.

Out of hundreds of suggestions, Hadfield and his fellow crew members, who taste-tested many products, choosing about a dozen foods, including jerky with cranberries from northern Saskatchewan, dried apple chunks and orange zest cookies from Quebec, chocolate from B.C., a bar with East Coast blueberries produced in Toronto, and, naturally, maple syrup, said Hadfield.

"We found a really good quality maple syrup, and it comes in tubes …  When you're eating food on a repetitive cycle, to be able to grab a big tube from Canada and squirt something so sweet and flavourful on top will be really nice," Hadfield said.

Crew members are also allowed to choose their menus, planning their breakfast, lunch and dinner as well as snacks. They can opt for a cycle, for example, a menu lasting seven days and then repeated.

What kinds of foods have been available on NASA missions?

Beverages such as coffee, tea, orange juice, lemonade are often provided as well as fresh fruit, which has to be eaten within the first few days of a mission or it spoils.

What form does the food take?

Rehydratable items (food and beverages) have had water removed from them and during the mission, water generated by the fuel cells is added to it just before it is eaten. Cereal is packaged with nonfat dry milk and sugar and water is simply added to the mix and voila, breakfast.

Thermostabilized food is heat-processed to destroy bad microorganisms and enzymes. Servings of fruits and fish are set in cans and, one only has to pull off the lid. Other foods, such as casseroles, are in pouches which must be heated.

Irradiated meat also comes in pouches and only needs to be warmed up to be eaten.

The pepper is suspended in oil while the salt is dissolved in water. Food can also be fresh. Tortillas, bread, fruits and vegetables (apples, bananas, oranges, celery and carrots) are stowed away in a special locker.

Are there going to be any changes to food in space?

NASA has a program to develop ways of growing fresh food in space.

The hope is that astronauts will build hydroponic labs to grow a garden – one that might also include potatoes, rice, peanuts, dried beans and wheat.

This could be still years away as the new food program is aimed at an 18-month mission to Mars.