Facebook's Zuckerberg apologizes to U.S. Congress, vows to do better

Facebook CEO Mark Zuckerberg said his company was not "wilfully blind" to abuse of its platform but says he has made major changes to the service to seek out fake accounts and protect users' privacy better.

Throughout a five-hour hearing, U.S. senators from both sides of the aisle grilled Facebook CEO Mark Zuckerberg on Tuesday.

Zuckerberg faced 44 senators in a rare joint hearing of the Senate judiciary and commerce committees to talk about how his social media company protects user data and deals with election meddling, among other issues.

In his opening remarks Tuesday, Zuckerberg, 33, said that Facebook didn't do enough to prevent its tools from being used for harm — citing fake news, interference in foreign elections, hate speech and data privacy.

But he rejected the suggestion that his company was "wilfully blind" and said he has made major changes to the service to seek out fake accounts and to better protect users' privacy. 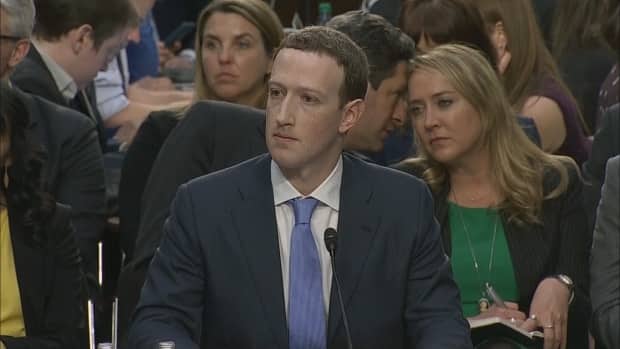 Facebook revealed last month that political consulting firm Cambridge Analytica (CA), which had ties to Donald Trump's presidential campaign, may have harvested data of 87 million users without their knowledge.

Democratic Senator Richard Blumenthal, a former Connecticut attorney general, produced a document his staff called a previously undisclosed 2014 agreement in which Facebook granted the researcher at the centre of the Cambridge Analytica scandal permission to sell data collected from Facebook users through a survey.

Facebook has claimed it was deceived by the researcher, whose survey was used to collect data on up to 87 million users.

Blumenthal asked if the document violated a 2011 consent decree on improving user privacy that Facebook reached with the Federal Trade Commission.

Zuckerberg said no, but also said the document was "in conflict" with Facebook rules.

Blumenthal decried Facebook's "wilful blindness" and insisted it will only change its ways with strict regulation.

Republican Senator Ted Cruz, of Texas, said many Americans are concerned that Facebook is biased against conservatives.

Cruz told Zuckerberg that to many people there "appears to be a pervasive pattern of political bias" after some conservative pages were taken down from the platform. In a series of pointed questions, Cruz asked Zuckerberg if he had tracked the political affiliations of his employees.

Zuckerberg said he had not. But he noted that the company is based in left-leaning Silicon Valley, and said "it is a fair concern."

Cambridge Analytica has boasted of helping Cruz win the Iowa caucus in 2016.

Zuckerberg apologized Tuesday and said he is "responsible" for what happens on Facebook. He reiterated that the company is in the process of investigating "many apps" that had access to user data.

A day earlier, Facebook began sending messages to users who may have had their data harvested, and created a help page where they could check.

The revelations gave rise to the hashtag #deletefacebook, which some social media users vowed to do. The campaign gained momentum when some celebrities and business figures did just that, including actors Will Ferrell and Jim Carrey, singer Cher and tech mogul Elon Musk.

Zuckerberg has apologized many times already, to users and the public, but it is the first time in his career that he has gone before Congress. He will testify again Wednesday, before a House panel, as he tries to restore public trust in his company and also stave off federal regulation that some lawmakers have floated.

Zuckerberg was asked about Russia's use of U.S. social media during the 2016 elections — a subject of several congressional investigations and special counsel Robert Mueller's probe into Russian interference.

In his opening statement, he addressed Russian election interference and acknowledged, as he has in the past, that the company was too slow to respond and that it's "working hard to get better." The company has said that as many as 146 million people may have received information from a Russian agency that's accused of orchestrating much of the cyber meddling in the election.

"We will continue working with the government to understand the full extent of Russian interference, and we will do our part not only to ensure the integrity of free and fair elections around the world, but also to give everyone a voice and to be a force for good in democracy everywhere," Zuckerberg continued.

Zuckerberg added his company is "working with" the Mueller probe.

Earlier this year Mueller charged 13 Russians and three Russian companies in a plot to interfere in the election through a social media propaganda effort that included online ad purchases using U.S. aliases and politicking on U.S. soil. Some of the Russian ads were on Facebook.

"One of my greatest regrets in running the company is that we were slow in identifying the Russian information operations in 2016," Zuckerberg said.

"We expected them to do a number of more traditional cyberattacks, which we did identify and notify the campaigns that they were trying to hack into them, but we were slow to identifying that type of new information operations."He said Facebook has deployed new artificial intelligence tools and will continue to keep improving.

He plans to have more than 20,000 people by the end of the year working on "security and content review."

Zuckerberg met Monday with Florida Sen. Bill Nelson, the top Democrat on the Senate commerce panel. Nelson said afterward that Zuckerberg was "forthright and honest to the degree he could" be in the private, one-on-one meeting.

Nelson said he believes Zuckerberg is taking the congressional hearings seriously "because he knows there is going to be a hard look at regulation."

Democrats like Nelson have argued that federal laws might be necessary to ensure user privacy. Republicans so far have shown little appetite for such regulation, but that could change if there are future privacy scandals or Democrats gain control of Congress in this November's elections.

"I think he understands that regulation could be right around the corner," Nelson said.

Separately, Zuckerberg said in a Facebook post on Monday that the company is establishing an independent election research commission that will look into the effects of social media on elections and democracy. He said the commission will work with foundations across the U.S. to set up a committee of academic experts who will come up with research topics and select independent researchers to study them.