As coyotes increasingly take up residence in cities and towns across Canada, both provinces and municipalities have adopted "living with coyotes' policies. A group in Collingwood, Ont., is demanding action, saying governments are failing to protect their pets.

Amid attacks on dogs and cats, some Collingwood, Ont., residents want trapping, some want a cull

Wayne Burley is on high alert when he takes his new pug Maya for a walk, especially if it's dusky or dark. He keeps her close on her leash with one hand, holding a ski pole with the other — always ready to defend the small dog against a coyote attack.

Until one terrible evening about a year ago, Burley said, he had no idea he had to be so vigilant.

Since then he's supported the aims of a group that advocates coyotes be trapped and moved elsewhere. Other residents of Collingwood, Ont., go further, calling for a cull, while one man is launching a class action lawsuit against the town over the issue.

Burley and his wife, Lois, were taking care of their son Craig's pug Wally. Like any other evening, they let Wally out to the back deck so he could  "do his business" in the yard before bed. But the 12-year-old dog didn't come bounding back into the house when they called him.

The family frantically searched the neighbourhood that night and the next day. The moment they learned he had been killed by coyotes is forever seared on Burley's memory.

"I heard Craig come running upstairs, yelling, 'I found him, I found him. He's dead.'"

Burley walked with his son over to the swamp wetlands, less than half a kilometre away from the house, where Wally's "badly mauled" body lay.

"I said, 'well Craig, let me go and get him,'" Burley said, choking back emotion as he remembers his son's response.

Burley lives on the eastern side of the picturesque town about 150 kilometres north of Toronto, in a subdivision along Georgian Bay.

"There seems to be a more significant population of coyotes in the east end of Collingwood, which is a more rural setting," municipal clerk Sara Almas confirmed to CBC News.

Coyotes are predatory canids — relatives of domestic dogs. They hunt rabbits, squirrels, rodents, snakes and birds, and also eat deer. Farmers must often take measures to protect their livestock, including sheep and chickens, from attacks.

But coyotes are increasingly settling into cities and towns across Canada, as people build homes in areas that weren't previously populated.

Several Collingwood residents say they've seen more coyotes than ever before in the last couple of years. The town has adopted the same "co-existing" approach to the urban coyote issue that many other municipalities have. Provincial natural resources and environment ministries in several provinces, including Ontario, British Columbia and Alberta, have a "living with coyotes" policy,

Municipal conservation officials say coyotes are an important part of the ecosystem, helping to control rodent and rabbit populations.

People can protect their pets, the province says, by installing "proper fencing," keeping cats indoors, keeping dogs "on leashes or confined to a yard" and not feeding their pets outside.

But Burley and other Collingwood residents are challenging these co-existence policies, saying they're not realistic and place an unfair burden on pet owners, who just want their dogs and cats to be safe around their own homes.

Jeff Brown, a homeowner who says he never saw this kind of problem with coyotes when he was growing up in Collingwood, is leading that charge. He runs an online group called Coyote Concerns Collingwood — an advocacy effort he began last year.

Wayne Burley met Brown after Wally's death — and learned that other dogs and cats had been injured in coyote attacks or gone missing.

"That's how I started to become an advocate to try and get the coyotes maybe trapped or moved out of subdivisions in here," Burley said. 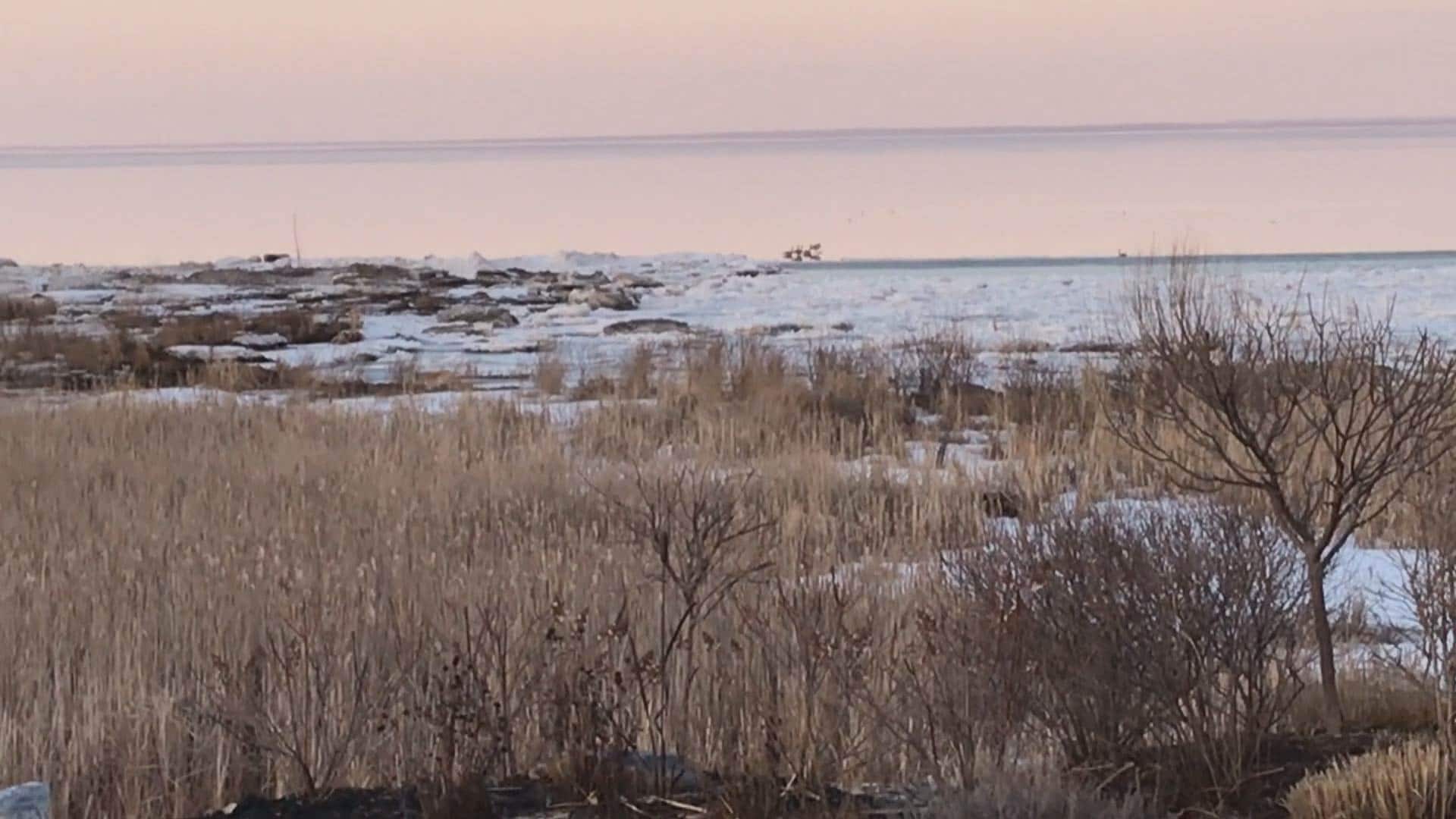 2 years ago
0:43
Jim Harrison of Collingwood, Ont., captured this iPhone video of a coyote roaming along the waterfront, metres from his home. Credit: Jim Harrison 0:43

But the province prohibits relocating coyotes more than one kilometre away, meaning they would simply return.

Ontario's Natural Resources ministry did not respond by deadline to a CBC News inquiry about the reason for the limit on relocation distance.

Other wildlife experts say relocation breaks apart coyote family units, which can be damaging for pups.  In addition, according to Alberta's Ministry of Environment and Parks, attempts to trap and relocate coyotes in some North American cities have failed, partly because other coyotes just move in to fill the vacancy.

If coyotes can't be relocated to unpopulated wilderness areas hundreds of kilometres away, Brown argues, that leaves one only option — no matter how "awful" it may sound.

"They will [have to] be trapped and killed," he said.

Ontario property owners are allowed to "capture or kill problem wildlife to prevent damage to your property," according to a Ministry of Natural Resources fact sheet.

"You can invite a licensed small game hunter or a trapper to hunt or trap coyotes on your property where local bylaws permit. There is no closed season for coyotes in the majority of southern Ontario," it says.

But Brown said it should be up to the town to take that initiative on a broader scale and that it has "essentially refused" to do that.

In early April, as a "last resort," he filed a class-action lawsuit against the town of Collingwood.

In his statement of claim, Brown alleges that by "allowing urban coyotes to roam at large in Collingwood and knowing they have and will attack and kill pets," town officials are violating the animal cruelty section of the criminal code. He also alleges that they have failed their duty to protect the safety of residents and their property. And pets, he argues, constitute property.

"Collingwood residents are living in fear of further coyote attacks, " the claim says.

The town has not yet been served with Brown's lawsuit and can't comment on it, said Sara Almas, the municipal clerk.

The town is taking action with a coyote management plan Almas said, which asks homeowners to report any coyote sightings or attacks on pets so they can be tracked.

Wildlife officers can also respond by checking people's property and advise if changes can be made to help deter coyotes and make sure they "don't get habituated" to the neighbourhood.

As some other towns have done, Collingwood is working with conservation group Coyote Watch Canada, which strongly promotes the co-existence model.

That means pet owners have to take precautions to keep their pets safe — not only from coyotes, but other threats, such as birds of prey, she said.

"The days of opening our doors and letting our dogs and cats roam at nighttime — it's over," Sampson said.

Brown and other members of Coyote Concerns Collingwood vehemently reject that argument  — saying it unfairly places blame on pet owners when coyotes shouldn't be in residential areas in the first place.

Government websites advise that coyotes will be less likely to come into populated neighbourhoods if residents avoid inadvertently attracting them with "food."  They advise enclosing garbage and compost, making sure seed isn't spilling out of birdfeeders, and cleaning up dog and cat feces from their yards.

There's also a clear acknowledgement that coyotes can be a threat to pets.

"Cats and small dogs may be seen as prey by coyotes, while larger dogs may be injured in a confrontation," a fact sheet from Ontario's Ministry of Natural Resources says.

Other Collingwood residents feel conflicted about the coyote issue.

"I'm very torn," said Lisa Harrison, a dog owner whose yard backs on to the wetland where Wayne Burley's pug was found dead.

"I'm an absolute nature and animal lover and so I think coyotes are beautiful and they have a right to existence," she said. "But I'm also a pet lover."

"I feel like [my dogs] have the right to a backyard where they can go out and be safe and obviously that isn't realistic with the coyotes," she said.

Her husband, Jim Harrison, captured a video of a coyote with his iPhone while standing on his deck. That time, the coyote was metres away in the marsh — but there are times when the animals have come up through their yard, right to the house.

The fear in the community is getting worse, Harrison said. He knows neighbours who tied a knife to the end of a pole after their dog was attacked by a coyote — and they now carry the homemade "spear" whenever they walk their pet.

"When you've got people with spears in their backyard — that's what we're dealing with," he said.