Aviation makes a big contribution to global warming, prompting activist Greta Thunberg and others — including some airlines — to advocate for flying less or not at all. Here are ways the airline industry can reduce its environmental impact — something that may be crucial to its survival.

Taking a plane may be the fastest way to travel, but it puts a lot of climate-changing emissions into the air.

Concern about aviation's carbon footprint has prompted Swedish teen activist Greta Thunberg and others to publicly give up flying altogether as part of the "flygskam" or "flight shame" movement.

Even airlines are questioning whether people should fly so much. KLM suggests people take the train when possible, while Lufthansa's CEO criticized Ryanair's cheapest flights, which are less than $15 Cdn, as "economically, ecologically and politically irresponsible."

"We know that aviation is an outsized share of emissions and it's one of the largest sort of personal type of carbon dioxide emissions that an individual can emit," says Ryan Katz-Rosene, a University of Ottawa professor who studies sustainable transportation. He has cut back to one flight a year and is reducing the distance he flies due to concerns about environmental impacts.

Air travel is responsible for about two per cent of global CO2 emissions. If aviation were a country, that would put it among the top 10 emitters in the world.

And its environmental impact is far greater — about 4.9 per cent of the total human contribution to global warming — due to the nitrogen oxides, contrails and cirrus clouds it generates in the atmosphere that have a further warming effect.

To make matters worse, aviation emissions are growing fast. Worldwide, passenger numbers are expected to double to 8.2 billion by 2037, the International Air Transport Association predicts. By 2050, without intervention, annual aviation emissions could be more than six times higher than in 2010, says the UN-backed International Civil Aviation Organization.

"It's not really sustainable the way we do it, in terms of CO2 emissions especially," says David Zingg, professor and director of the Centre for Research in Sustainable Aviation at the University of Toronto.

He believes that lack of sustainability is "by far the biggest threat to aviation's future."

So is reducing or eliminating air travel the only solution?

Zingg, who has spent years researching how to make flying greener, doesn't think so. He believes it should be feasible in the future to reduce the impact per passenger per kilometre travelled to one-eighth of what it is today — an amount he considers a "negligible part of the human contribution" to climate change.

Here's a look at some ways to make that happen.

Jet aircraft use 80 per cent less fuel per seat per kilometre today than they did in the 1960s, according to Air Transport Action Group, which is funded by and represents the air transport industry. But efficiency gains aren't keeping pace with the growth in passengers and the distance travelled, so overall emissions are rising.

Zingg says beyond improving the engine there are two key ways to improve aircraft efficiency.

One is reducing weight, largely through the use of lighter materials — a strategy used by Solar Impulse 2, the solar plane made of lightweight carbon fibre that flew around the world in 2016.

The other is reducing drag, Zingg's own area of research. His lab is looking into more streamlined aircraft designs that make the plane look "a bit like a flying wing." Another option is bracing the wings with a truss that allows planes to have a longer wingspan — another strategy used by Solar Impulse 2.

Planes emit CO2 by burning fossil fuels, so an obvious solution is powering them with cleanly sourced electricity instead. A number of companies are working on small electric planes, including Richmond, B.C.-based Harbour Air, which flies tour and charter seaplanes along the coast of B.C. and Washington state. It aims to have a fully electric prototype in the air by November, founder and CEO Greg McDougall said.

International competitors include U.S..-based Wright Electric and Israel-based Eviation, which plan to test all-electric nine-seater planes later this year with ranges of up to 1,000 kilometres.

Airbus is working on the E-Fan X hybrid-electric jet, based on the BAE 146, which holds about 100 passengers. It will replace one of four jet engines with an electric motor and aims to fly short-haul flights starting in 2021.

Lindsay, Ont.-based Horizon Aircraft is also working on a prototype of a five-seater hybrid-electric plane that runs on batteries and regular gasoline instead of jet fuel, with a range of 1,500 kilometres.

Unfortunately, about 80 per cent of the airline industry's emissions come from passenger flights longer than 1,500 kilometres, according to the Air Transport Action Group. And Zingg says because planes are so weight-sensitive and batteries still so heavy, larger electric aircraft are "not on the horizon." 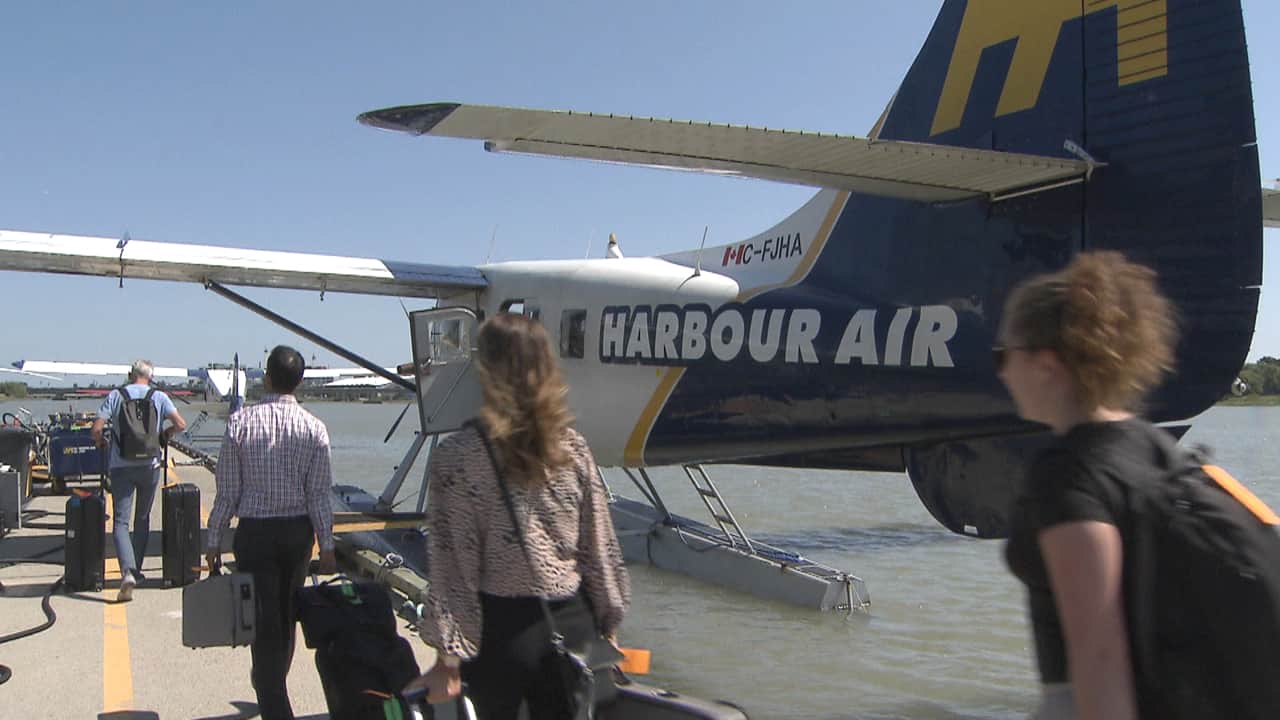 How the aviation industry is going green

That's led researchers to consider another option — replacing fossil fuel-based jet fuel with alternative fuels, such as biofuels derived from plants. Plants absorb CO2 as they grow, potentially reducing net emissions by up to 80 per cent, the industry says.

It's something airlines have experimented with. For example, last year a Qantas flight flew from the U.S. to Australia using a blend of 90 per cent jet fuel with 10 per cent mustard seed-based biofuel from Gatineau-based Agrisoma Biosciences Inc.

But there are two hurdles to scaling up biofuel's use, Zingg says:

Solving those challenges is "progressing quite slowly," he added. "Many of us hoped we would already have more biofuel in the system by now."

Ever been on a flight that circled a congested airport waiting for a spot to land? According to the Intergovernmental Panel on Climate Change (IPCC), improvements to air traffic management and other operational procedures could reduce aviation fuel burn by up to 18 per cent. So could reducing things like taxiing on the ground.

In fact, planes even burn jet fuel or diesel while sitting at the gate — for lighting, heating and air conditioning. And many airport vehicles, such as those used for refuelling and transporting passengers and luggage, also burn fuel. All those things could be electrified.

Other Canadian airports, including Calgary, Montreal and Winnipeg, have introduced a small number of electric vehicles.

There are also non-technical ways to make flights more efficient — making sure planes are fuller, carry less luggage (by charging more for it) and maybe even reducing weight by eliminating in-seat entertainment screens, Zingg says: "When you're actively looking for one or two per cent [reduction in weight], those kinds of things are annoying."

Increased efficiency "will not fully offset the effects of the increased emissions resulting from the projected growth of aviation," says the IPCC.

It suggests also using regulatory options such as:

All of these are expected to increase the price of plane tickets, which may in turn discourage people from flying.

Zingg said that while it isn't ambitious right now, that's a "huge step" for the industry, and it could potentially set stricter targets in the future.

The EU has been including aviation emissions in its emissions trading system since 2012, which it estimates has reduced the carbon footprint of aviation by more than 17 million tonnes per year.

Starting in 2021, the ICAO also has an agreement to monitor emissions on international routes and offset any emissions higher than 2019-2020 levels. It's called the Carbon Offsetting and Reduction Scheme for International Aviation (CORSIA). But participation will be voluntary until 2023 and some companies will be exempt (those with very few international flights, or planes that weigh less than 5,700 kilograms).

Katz-Rosene, who has been doing research on CORSIA, calls it "a very hollow agreement."

"The entire premise of CORSIA is to facilitate or to enable the sector to continue growing," he said, "which is ultimately the fundamental problem with aviation emissions."

He notes that, generally, economic incentives to fly are the opposite of what they should be, given the environmental harm. Frequent flyers are showered with perks, and people earn "air miles" as they shop, with a flight held up as the "ultimate reward."

"We have a system that rewards air travel," he said, "and that shouldn't be the case."

He thinks not just governments, but businesses and institutions that require workers to fly, need to rethink their travel policies to tackle the problem.

And, like Thunberg and other promoters of the "flygskam" movement, Katz-Rosene thinks flying less is part of the solution, along with technology and regulation.

"I think we need an all hands on deck approach, really," he said.

If you must fly, there are some ways to reduce the impact of your flight, but they make a small difference compared to staying on the ground.

"Certainly, not flying as much would reduce the CO2 emissions from aviation," acknowledges Zingg. But he said his goal and that of the industry is to make it possible to fly more sustainably.

"If the only solution is to stop flying, then I would say people like me have kind of failed."

As for the other solutions: "None of them will do it all by themselves.… The really important thing is to do it all."

With files from Laura MacNaughton