Canadian whistleblower Chris Wylie implicated B.C.-based AggregateIQ in his testimony to a U.K. parliamentary committee about misuse of data targeting for political purposes.

The Canadian whistleblower at the heart of the Facebook privacy scandal says he believes it is "reasonable" to conclude that "cheating" in the Brexit vote through the manipulation of data to influence voters may have altered the outcome.

Chris Wylie made the statement while testifying before the British parliamentary committee on media in the wake of the Facebook and Cambridge Analytica scandal, which began with his allegations that Cambridge Analytica improperly harvested details of 50 million Facebook users and used the material in U.S. President Donald Trump's 2016 election campaign.

Wylie is a data scientist who helped found Cambridge Analytica and left the company in 2014.

Wylie told the British committee on Tuesday that Vote Leave, the official campaign backing Britain's exit from the European Union, also had access to data that was inappropriately collected from millions of Facebook users.

During his testimony, Wylie implicated British Columbia-based marketing and software development company AggregateIQ (AIQ), saying he "absolutely" believed AIQ had drawn on Cambridge Analytica's databases for its work on the Brexit referendum.

The data would be used to influence what certain voters saw on social media, Wylie said. His understanding, he told the committee, was that AIQ was targeting people who were seen as key to swaying the result of the referendum.

Wylie also repeated an allegation that AIQ helped sidestep Brexit campaign spending limits — which had previously been made by whistleblower and former Vote Leave volunteer Shahmir Sanni, who has submitted documentation to the U.K.'s Electoral Commission.

AIQ co-founders Jeff Silvester and Zack Massingham, both based in Victoria, B.C., did not respond to multiple requests for interviews to respond to Sanni's allegations. But in a statement, the company denied any wrongdoing.

"AggregateIQ works in full compliance within all legal and regulatory requirements in all jurisdictions where we operate," the company told CBC News, and has "never knowingly been involved in any illegal activity."

Because of the links between the two companies, Wylie said, Vote Leave got the "the next best thing" to Cambridge Analytica when it hired AIQ, "a company that can do virtually everything that [Cambridge Analytica] can do but with a different billing name."

SCL is the parent company of Cambridge Analytica.

Wylie told Britain's Observer newspaper that he was instrumental in AIQ's founding when he was the research director of SCL. He said they shared underlying technology and worked so closely together that some Cambridge Analytica staff often referred to the Canadian firm as a "department." 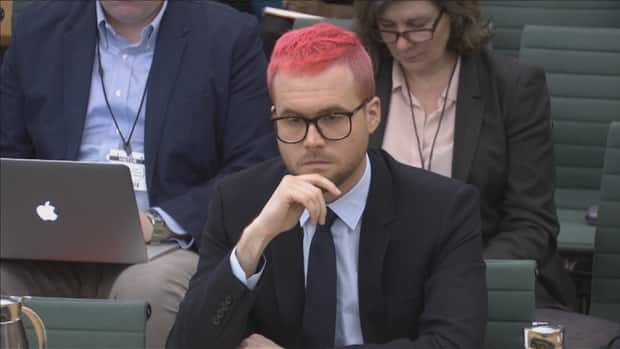 3 years agoVideo
2:55
'You cannot call yourself somebody who believes in British law and win by breaking British law in order to achieve that goal,' says Christopher Wylie 2:55

"This is a company that has gone around the world and undermined democratic institutions in all kinds of countries. They could care less as to whether or not their work is compliant because they like to win," he told the committee.

Specifically, Wylie said AIQ worked on projects relating to the Nigerian election that involved "distributing violent videos of people being bled to death to intimidate voters."

The committee chair noted that Wylie has provided "a large number of documents" to support his allegations around AIQ's involvement in Nigeria.

Big accusations from Chris Wylie About B.C.-based AIQ. "This is a company that has gone around the world and undermined democratic institutions in all kinds of countries. They could care less as to whether or not their work is compliant because they like to win.”

Wylie said AIQ has been able to distance itself somewhat from controversial activities because it has "licensed their intellectual property."

During his testimony, Wylie said he was "incredibly remorseful" for his role in developing the data-targeting technology that made the alleged breaches possible.

But he also noted he is not against data targeting as a whole because it's possible to do it in "an ethical way."

AIQ is now the subject of an investigation by B.C.'s privacy commissioner, and on Tuesday the federal privacy watchdog said it has gotten involved, as well.

In an emailed statement to CBC News, the Office of the Privacy Commissioner of Canada said it had "been in contact with our provincial counterpart in British Columbia, which has been examining matters related to AggregateIQ, and our discussions with them are ongoing."

'We played no role in the U.K. referendum'

Cambridge Analytica, which has also been embroiled in growing public scrutiny over use of online data, issued a statement Tuesday saying Wylie "was a part-time contractor who left Cambridge Analytica in July 2014 and has no direct knowledge of the company's work or practices since that date."

In its statement, the company said: "We played no role in the U.K. referendum on EU membership."

We take allegations of unethical practices in the past by our former global (non-US) political consultancy very seriously; they are currently the subject of a full and independent investigation which we have instigated to establish the facts. Its findings will be made available.

Alexander Nix, who has been suspended as Cambridge Analytica's CEO pending an investigation, has been recalled to appear before the same committee. The committee requested that he speak to it again after reports in the media, including a Channel 4 documentary, revealed more detail about the company's methods.

Ben Bradshaw, a Labour MP who was in favour of the U.K. remaining in the EU, told CBC News Network that Wylie's testimony raised "very serious questions which parliamentarians here now believe need to be answered."

Facebook CEO Mark Zuckerberg has also been asked to testify before the British parliamentary committee about the data privacy scandal.

But Facebook, which is also facing intense scrutiny and investigations in the U.S., has instead offered to send chief technology officer Mike Schroepfer or chief product officer Chris Cox.

Damian Collins, chair of the committee, urged Zuckerberg on Tuesday to "think again" about choosing not to appear
and repeated an offer to have him testify via video link.

With files from CBC's Carolyn Ryan and The Associated Press