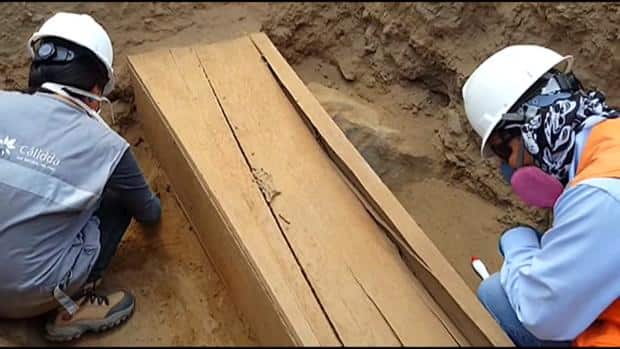 3 years ago
0:59
Remains of Chinese workers uncovered during excavation for pipelines 0:59

Archaeologists in Peru have unearthed three 19th-century mummies of Chinese immigrants. The bodies were found inside their wooden coffins by workers of Calidda, a natural gas distributor in Lima and Callao.

The mummies were buried less than a metre (3.2 feet) deep in the Lima district of Carabayllo. Their coffins contained traditional Chinese artifacts, such as lighters and pipes to smoke opium.

Archaeologists believe the mummies belonged to immigrants from the first wave of Chinese who travelled to Peru in the mid-19th century to work in the country's booming sugar and cotton industries.

Archeologist Cecilia Camargo, in charge of the excavation and conservation of these bodies, believes more remains of Chinese immigrants will be found in the area.